Greet Spring With a Visit to a Public Garden

Last year, the pandemic shut the gates of many public gardens just as spring was on its way: According to a survey by the American Public Gardens Association, only about 4 percent of public gardens remained fully open as of March 30, 2020. Once public gardens began to reopen months later, they became places of natural respite for visitors, perhaps even more so than in the past.

Making up for last year’s lost spring, these seven gardens around the country expect to be particularly glorious this year, offering a range of beloved spring flowers, traditional botanical collections and experiential outdoor spaces. At any garden changing conditions can make ephemeral blooms difficult to pin down, so plan on checking with the garden for updates (find more online at publicgardens.org), as well as for new protocols such as advance reservations, schedules, open areas and mask requirements. Annual members typically receive free garden admission.

Start spring with snowdrops, one of the early bloomers already emerging on the 250-acre grounds of the New York Botanical Garden. With their white petals, the flowers appear along with the violet-colored spring crocus, Cornelian cherry dogwood and hellebore (also called Lenten rose). Visit again in April to see thousands of yellow and white daffodils on Daffodil Hill, and the branches of nearby cherry and crab apple trees should be covered in clouds of pink and white. Mid-April is also the beginning of the season for the 500 species of lilacs in the Burn Family Lilac Collection, which line both sides of the garden’s main road. For a different kind of spring renewal, the exhibition “Kusama: Cosmic Nature” by the Japanese artist Yayoi Kusama, originally scheduled for 2020, will be on view from April 10 to Oct. 31. One of the installations, “Flower Obsession,” will allow visitors to adorn a greenhouse installation with coral-colored flower stickers. Garden tickets must be reserved in advance, starting at $22 for visitors to the garden grounds; New York City residents with proof of residency receive discounted admission and free admission to the grounds on Wednesdays. Tickets for the Kusama exhibition are now on sale. 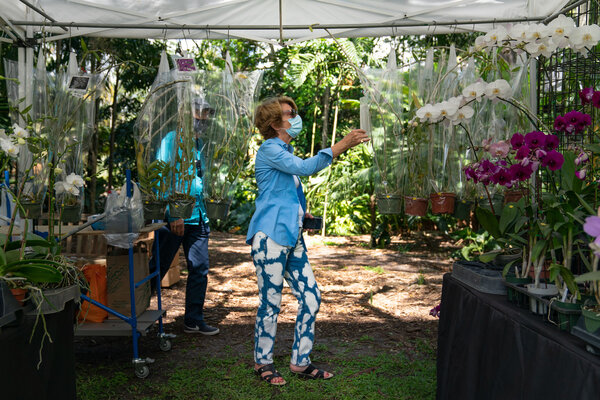 About a 30-minute drive south of downtown Miami, the 83-acre Fairchild Tropical Botanic Garden, named after the botanist and explorer David Fairchild, is working to grow once-plentiful native orchids and restore them to the region. March 21 is the final day of the garden’s “Orchids in Bloom” event, but thousands of orchids — both native species and orchids from around the world — can be seen throughout the year. Of particular interest is the outdoor Richard H. Simons Rainforest, where orchids grow as they do in the wild, attached to trees as well as in the ground. In April, look for many colors of moth orchid, as well as the delicate violet orchid, a pendant-style native orchid with a spill of flowers. Beyond orchids, seek out the garden’s many tropical plants and waterfalls At the Wings of the Tropics exhibit, butterflies like the blue morpho flutter overhead, looking like flowers in flight. Tickets for adult visitors are $24.95; U.S. active military and veterans are free. On Mondays, Wednesdays and Fridays, the garden opens early for older adults and others vulnerable to illness.

Philadelphia has been called America’s garden capital, and one of the area’s most sizable gems is Longwood Gardens, with 400 acres of gardens, meadows, and woodlands currently open. The destination include a glass conservatory that in late March displays striking Himalayan blue poppies. In mid April, the 600-foot-long Flower Garden Walk — the first garden laid out by the founder Pierre S. du Pont in 1907 — will have 200,000 tulips and other spring-blooming bulbs in full flower. Colorful displays are a focus of this public garden, which aims to inspire its visitors by presenting aesthetically pleasing combinations of plants. For those who want to create similar effects at home, the Idea Garden has an additional 60,000 tulips, along with annuals, perennials and an ornamental kitchen garden to seed amateur gardeners’ creativity. As the weather warms, stroll the three miles of trails through the Meadow Garden, where wildflowers will emerge well into spring. The Wisteria Garden puts on a show in May, with sweetly scented flowers in both purple and white. Advance reservations are required for members and visitors; adult tickets are $25, with discounts available for U.S. active military, veterans and qualified state residents.

With its mild temperatures, Arizona in the springtime draws botany enthusiasts every year. The Desert Botanical Garden, founded in 1939 to study and conserve desert plants and their arid habitats, has its peak blooming season in March and April. Walk alongside the wildflowers on the Harriet K. Maxwell Desert Wildflower Loop Trail, which runs between penstemons, poppies and desert marigolds the color of sunshine. The palo verde — Arizona’s state tree — burst with yellow flowers in April, which then blanket the ground with a lemony snow. Spine-covered prickly pear cactuses show their softer side, producing delicate flowers in yellows, oranges, pinks and reds. A later bloomer in May is the night-blooming saguaro cactus, which Ken Schutz, the garden’s executive director, describes as one of the garden’s many “charismatic megaflora.” The 140-acre garden has more than 1,100 saguaros, and has collected more than 75 percent ofall known taxa in the world. Visitors and members must make reservations in advance (tickets start at $24.95 for adults). U.S. active military personnel receive free admission with a valid government I.D.

With 385 acres and 27 display gardens, it can be hard to know where to begin at the Chicago Botanic Garden, located about 20 miles north of the city. Tapping into the sights, smells, sounds and textures in the Sensory Garden may be a good start. Here, the dwarf reticulated iris — there are around 21,000 of these bulbs — pop up in deep blues in early spring, flowering along with fragrant hyacinths and lightly perfumed witch hazels. Hundreds of thousands of daffodils also appear throughout the garden in April, including impressive displays near the Learning Center and just outside the English Walled Garden. Visit this particular garden weekly to see successive spring flowers bloom, starting with six species of snowdrops and, later, a particularly attractive saucer magnolia. Along with many more magnolia trees, bloom lovers may also find that the 400 crab apple trees along the Great Basin provide a quintessential spring experience. Members and visitors must register in advance online; garden admission is free, and parking is $25 for nonmembers.

In February, the storms that hit Texas dropped snow and froze waterfalls at the 66-acre Dallas Arboretum and Botanical Garden. A month later, the tulips, daffodils and hyacinths lining the Paseo, the garden’s main thoroughfare, might make that freeze seem like a distant memory. This public garden, on the shore of White Rock Lake, plants more than 500,000 bulbs each year for the Dallas Blooms festival, which runs until April 11 this year. Waves of color in tulip form additionally appear in the Jonsson Color Garden, which also has dark green lawns for picnicking. Children and their families may delight in the Rory Meyers Children’s Adventure Garden ($3 additional admission), which includes an elevated pathway through the tree canopy, interactive science activities and a maze leading to a secret garden. Members and visitors must reserve timed-entry tickets and parking in advance. Tickets are $17 for nonmember adults during the Dallas Blooms festival, with free daytime admission for teachers and educators.

When this 79-acre garden closed to the public last spring, the only way most people could see the garden’s floral highlights, like the Maritz Apple Allée, where crab apple trees covered in bright pink flowers lined both sides of a petal-carpeted walkway, was on social media. This spring, people can turn to an interactive “What’s in Bloom” map on the garden’s website before visiting in person. Visitors can track down flowers throughout the year, like crocus and squill, which bloom in March. In the Japanese Garden, spring starts with weeping Higan cherry trees and their waterfall of pink blossoms. The Yoshino cherries and the Kanzan cherries follow soon after, with peak bloom typically happening mid-April. No matter what time of year, the Climatron, a geodesic dome conservatory, hosts tropical plants, waterfalls and even resident geckos. Admission for nonmembers is $14; St. Louis city and county residents with proof of residency can visit for free from 9 to 11 a.m. on Wednesdays and most Saturdays.

Tucked away on the northern end of Bainbridge Island, a 35-minute ferry ride from Seattle, is this 150-acre experiential garden and forest reserve. The reserve has a one-way, two-mile loop trail that runs through 23 different plant areas, including the early spring blooms of witch hazel, gooseberry and western trillium. In March, rhododendrons glow in the Glen, an area planted with the favorite flowers of Virginia Bloedel, the wife of the timber heir Prentice Bloedel; the couple bought the land in 1951 and transformed it into a reserve. Another highlight is the Buxton Bird Marsh and Meadow, where more than 50 native wildflower varieties and close to 50,000 bulbs aim to attract pollinators. A recent composer in residence conducted a “scent tour,” and provides instructions on the reserve’s website for visitors interested in taking a fragrance-focused walk, particularly potent in this second pandemic spring. Tickets (starting at $17 for adults) must be booked in advance. Through a free “Strolls for Well-Being” program, participants receive a six-month membership to the reserve and a guidebook of 12 self-guided walks, with themes such as forgiveness or gratitude.