‘He Sort Of Wants A Daddy’: Decoding The Homoeroticism In ‘The Lighthouse’

“The Lighthouse” teeters somewhere between those extremes. Robert Pattinson and Willem Dafoe play lightkeepers bunking on a remote island off the coast of Maine in the 1890s, where they spend four weeks doing tiresome physical labor and safeguarding the titular edifice. The weather soon turns nasty. So does the tension. Every issue that arises when sharing a confined space — bottled-up emotions, chores, boredom, meals, hormones, flatulence — turns into a power struggle.

Beneath that psychodrama lies an unspoken tenderness that is, in a word, homoerotic.

Ephraim Winslow (Pattinson) arrives as the apprentice to longtime lighthouse guardian Thomas Wake (Dafoe). Alone together in a mental tug of war, Ephraim becomes the submissive to Thomas’ dominant. As much as they externalize hypermasculine paradigms, the loneliness of their isolation reveals a need for affection that was there all along.

And yet “The Lighthouse” remains coy about the pair’s exact desires. Shot in crisp black-and-white that accentuates its vintage setting, the movie is a dizzying whirlwind of ambiguities. Blending humor and suspense, director Robert Eggers unleashes the same quivering paranoia he brought to his sterling 2016 debut, “The Witch.” What’s real and what’s imagined are indistinguishable under the hypnosis of the story.

This film originated with Eggers’ brother, Max, who was working on a ghost-story screenplay revolving around a lighthouse. “When he said ‘ghost story in a lighthouse,’ I pictured, basically, a dinner scene of the two of them in a rusty, dusty, crusty, musty atmosphere, black and white, 35 millimeter, boxy aspect ratio, facial hair, pipe smoke, cable-knit sweaters,” Eggers recalled.

From there, the siblings dived into period-specific research and collaborated on the script, always clear that Ephraim and Thomas’ proclivities should be open to interpretation. The movie is more intriguing as a result, even if we’re denied the joy of seeing Pattinson and Dafoe get it on.

In separate conversations with Eggers and his two lead actors, I probed them on the homoeroticism sprinkled throughout “The Lighthouse.” Minor spoilers ahead, so proceed with caution, matey. Their answers have been lightly edited for clarity. 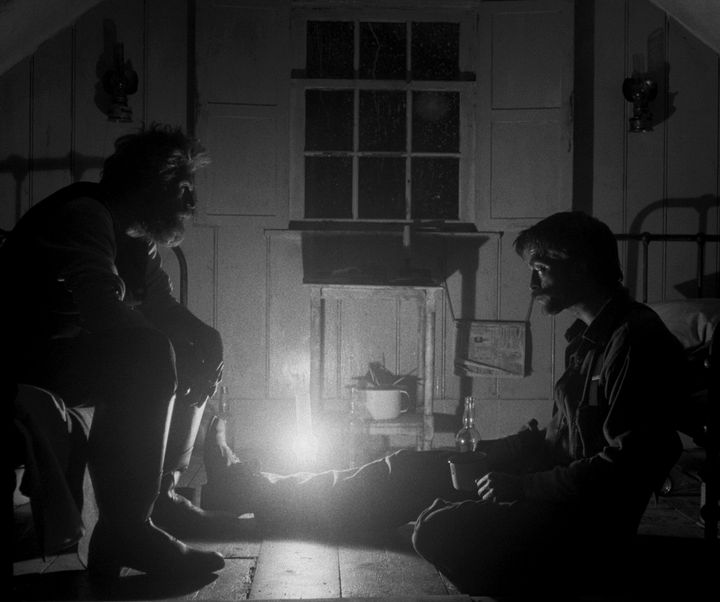 When you’re watching “The Lighthouse,” its queer undertones don’t immediately reveal themselves. Were they something that Eggers, Pattinson and Dafoe consciously discussed?

Dafoe: It’s there. What’s to talk about? It’s a no-brainer.

Pattinson: It was pretty explicit in the script. The script said the lighthouse looked like an erect penis.

What’s Beneath Their Unspoken Desires

When Ephraim and Thomas first appear in the same shot, they stand deadly still, staring into the camera with bitter glowers, daring us to come along for the ride that’s to follow. On the first night in their shared cabin, Thomas makes it clear that he will lord over Ephraim. “The light is mine,” Thomas declares, insisting that Ephraim stick to more laborious duties. Immediately, lines are drawn. Ephraim is in a position of servitude, exploited by Thomas’ carnal attraction to the beacon. This only reinforces the mounting tension. Soon enough, Ephraim is dreaming about Thomas lying shirtless in that erect lighthouse.

Pattinson: Isn’t it really a love story in a lot of ways, where they just don’t know what to do with each other?

Eggers: Am I saying these characters are gay? No. I’m not saying they’re not either. Forget about complexities of human sexuality or their particular inclinations. I’m more about questions than answers in this movie.

Dafoe: Toxic masculinity! They’re pushing each other’s buttons out of fear and out of threat of who they are. And they’re both guilty. They have a sense of guilt, of wrong. There’s no moral judgment in this story. It’s just to watch these two guys struggling to find a way to survive themselves, really. The [philosopher Blaise] Pascal quote “All miseries of the world can be connected to the fact that a man can’t sit alone in his room” — I’m paraphrasing — is basically it. It’s a simple story, but it’s got existential roots and identity things and things about masculinity and domination and submission. And for better and for worse. Then you see it flip-flop and it’s kind of cool.

Pattinson: In so many ways, you’re thinking how much of the relationship is actually happening. How much of it is in [Ephraim’s] head? Willem’s character could just be a normal boss, but there’s some kind of sub/dom relationship or something where I’m exaggerating in my mind his dominance over me because I kind of want it in a strange kind of way. It always read as a very sensual relationship. It wasn’t just about a boss and his worker. Also, he’s kind of mad, as well.

Eggers: For better or for worse, my brother and I are fairly Jungian-inclined. Obviously that [lighthouse] symbol is quite clear. And being Jungian-inclined, it inspires themes and motifs in the story. In a fucking incredibly juvenile way, we hammer it home with vaginal keyholes and phallic lumberjack tools and logs. It goes on and on and on. I hope it’s a movie where both Jung and Freud would be furiously eating their popcorn.

Pattinson: I was pretty conscious of how I wanted the relationship to come across. In a lot of ways, he sort of wants a daddy. 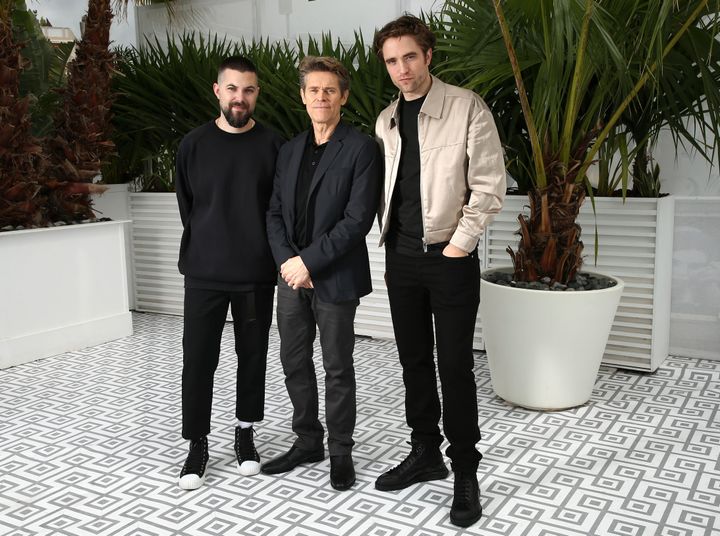 In the movie’s most memorable scene, a frenzied Ephraim insists, “If I had a steak ― oh boy, a rare, bloody steak ― if I had a steak, I would fuck it.” This offends Thomas, who has been preparing their dinners nightly, and he starts fishing for compliments. “You’re fond of me lobster, ain’t you?” he asks in his pirate cadence. “Say you’re fond of me lobster.” At the very least, it’s a cry for affection. At most, Thomas is talking about his penis.

Eggers: I knew what I was writing, yes.

Dafoe: The slang in Naples for penis is “fish.” Yeah. It’s all there. There are those tender moments. It’s masculine archetypes in trouble, so those things that seem perfectly secure and Puritan — good, working men — unravel really quickly. I think that’s also the source of a lot of the humor.

Pattinson: There’s something about that kind of comedy through desperation. It’s almost frightening, but it’s sort of ridiculous at the same time.

In their dimly lit dining quarters, Ephraim and Thomas throw down liquor, swap biographies and goad each other. Through flirtations disguised as aggression, the men become better acquainted. Thomas calls Ephraim “pretty as a picture” and explains that he got divorced after being away from home so often. The cagey Ephraim says, without offering many specifics, that he’s been fleeing one job after the next, haunted by some sort of mysterious past. As time wears on, the weather becomes stormy and their moods turbulent. But all the while, stuck indoors with nothing but each other, they’re developing a kinship. When especially drunk one night, they dance a jig together and slow dance in each other’s arms. Thomas sings a lullaby as Ephraim clings to his shirt, yearning for comfort. The men then peer at each other and glide in for a kiss, until pulling away and reacting with brief fisticuffs and more cuddling. Later, when Ephraim has had enough torment, he walks Thomas like a dog.

Pattinson: We had a teacher come, and we had a couple dancing lessons with her. But add on top of that the characters’ turbocharged drinking, and it turns into a different thing.

Eggers: You see men dancing together in an old-timey setting. It’s just something that happened. I mean, men dance together now in non-homosexual-inclined situations. But we knew that in this world, all they have is each other, and there are these peaks of highs and lows. So you have the fast dancing that I’ve seen documentaries of lumberjack camps doing — that step-dancing-adjacent kind of stuff. But when you get drunk enough, you’re going to be slow dancing.

Pattinson: It all made sense to me, the psychology where you can only show that kind of emotion when you’re completely wasted. But at the same time, in the early scenes, he’s so desperately wanting to please. And then when he rebels against Willem, he wants to be punished just to get attention. He comes across as a guy who’s probably had an incredibly hard life. He’s been working manual labor and been this itinerant wanderer for ages. He’s done some bad stuff and feels really guilty about it and basically wants some sort of comforting, but he doesn’t know how to ask for it or how to talk about it. It all comes out in this manic, overly physical stuff.

Eggers: A lot of sea ballads are from the perspective of the wife or the fiancée who’s been left by the sailor, so there’s many really incredible recordings of old men singing these songs about “Johnny left me.” It’s really quite powerful. But it’s also not like homosexuality didn’t exist in the past. You don’t need to wonder about these lumberjack shanty camps and stag lighthouse settings. 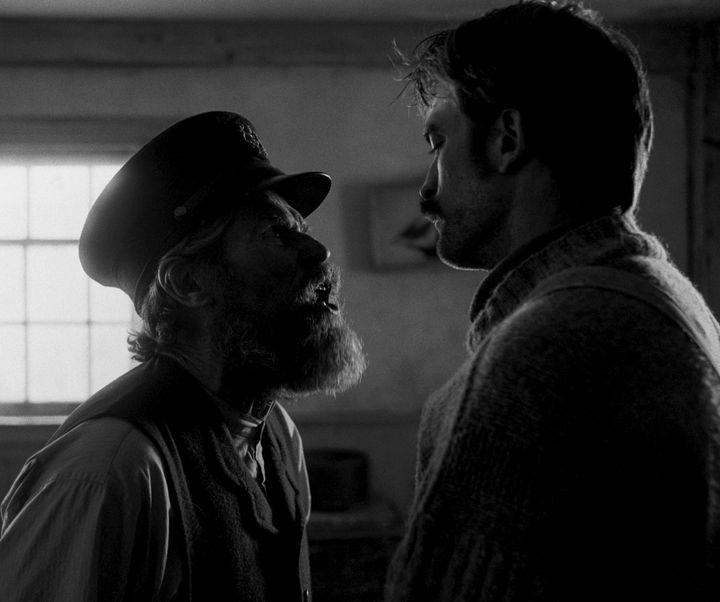 Eggers: I certainly have an answer for you, but I’m not going to say it. Sorry, respectfully.

Pattinson: That’s one of the things I was building the whole character on. It felt very visceral. It’s a paradigm of not having the mental mechanisms to deal with your feelings and your memories. There’s something kind of OCD about the character. He’s basically masturbating as if he were doing a drug. Some people are so torn apart and out of control with their desires and sexuality that it torments them. The mermaid statue is such an innocuous thing, but I think he’s more tormenting himself about his desire. He’s tied up in knots about such a simple thing. He’s just so afraid of losing control of himself. There’s also something about the little rain hat he has on his head. Like, you really have that hat while you’re wanking off in a shed?

Eggers: Neither [my brother nor I] thought this was a good idea, but there was an early version [of the script] where it ended up with Robert Pattinson growing a full beard and putting on Willem Dafoe’s outfit. It was just like, “This is stupid.” Look, we make all these huge, gratuitous bad choices, and we really stick to them. That one was even too juvenile for us.

“The Lighthouse” is now in theaters.