His Dancing Days Were Over. Then Came ‘Another Round.’

Martin is a history teacher with the listless, sloping posture of a comma. He walks slowly, as though every step ignites a jolt of pain. His job is uninspiring; his marriage is falling apart. “Have I become boring?” he asks his wife. “Do you find me boring?”

Her answer seems to confirm what he already knows: “You’re not the same Martin I first met.”

In the Danish director Thomas Vinterberg’s “Another Round,” a film about breaking the rules and, in doing so, breaking free, Martin is one of four high school teachers who decide to test a theory about alcohol: As long as they maintain a consistent level of it in their blood, their lives will improve.

The experiment has its problems. But ultimately Martin, played by Mads Mikkelsen, finds release, which comes through in a dance at the end of the movie. The dance, a little drunken, shows Mikkelsen’s nimble ability to balance daring and control. It’s fitting: He was once a professional dancer.

The dance begins after Martin, who took jazz ballet lessons in his past, has attended the funeral of a friend and received text messages from his wife that hint at reuniting; he and his friends greet graduating students at the harbor as the song “What a Life,” by the Danish band Scarlet Pleasure, plays. At first, his movement is a little tentative, full of stops and starts. But once he gets going, he throws himself into it, taking wide crossover steps, swaying and, with a silky vigor, spinning to the ground and springing up — all the while taking sips from a can of beer.

As his body melts into the beat of the song, it’s clear that this is more than a dance: Martin has been given another chance — or round — at life, and he’s taking it. Uninhibited and robust, Mikkelsen, 55, darts through space, punching at the air and jumping forcefully before taking off in a most spectacular leap over the water. The film ends with him in midair.

In working with Mikkelsen, the choreographer Olivia Anselmo said: “He started the whole rehearsal saying, ‘Well, I’m not like I used to be, I’m not young anymore and blah, blah, blah.’ And then the first thing he does is go into a slide and a roll on the floor and jumps up and does this thing where he wraps his leg around the other leg — like a yoga pose. He just did that.”

Mikkelsen started out as an acrobat before discovering dance, though it’s as an actor that he’s made his name. He was the Bond villain in “Casino Royale,” and Dr. Hannibal Lecter in the television series “Hannibal.” He won a best actor award at Cannes for his role in Vinterberg’s film “The Hunt” (2012). But to Anselmo, he is something else. “When I was in the studio with him, it’s not like I’m thinking like, wow, this is this world-known actor,” she said. “It was so cozy and chill. I just thought, this is just another dancer.” 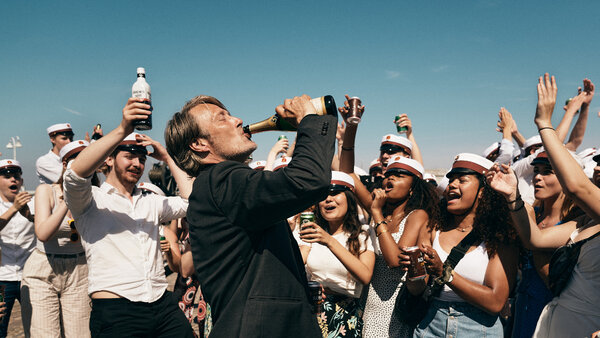 Recently, Mikkelsen spoke about the dance and his professional dancing years, which lasted around nine years. He switched to drama, he said, “to pull out a different drawer and find something new,” he said. “I was also always more in love with the drama of dancing than the aesthetics of dancing.”

What follows are edited excerpts from a recent conversation.

How did you feel about dancing in the film?

I thought it would be a hard thing to get away with in a realistic film — to dance for real. So in my world, it was more like a drunken dream or a drunken image or fantasy, but in Thomas’s world, it was literally a man dancing while he was surrounded by a lot of young people. [Laughs]

He wanted the ending to be a balance between a man flying and a man falling and, obviously, the dance was perfect for that.

How did you begin dancing in the first place?

I started out as a gymnast, and there was a choreographer coming to our club. She wanted a couple of acrobats in the background who could do flips and she wanted us to do a few steps as well. She thought I had a certain amount of talent and she asked me if I wanted to learn the craft, and I had absolutely nothing else to do.

I did a few shows with her, kind of musical things, and then it just felt as if I had to honor dance. I had to really learn it from the base.

Where did you study?

I applied for a scholarship and I went to New York for two summers to Martha Graham. Then I joined a contemporary ballet group in Denmark and I did a ton of musicals like “La Cage Aux Folles” and “Chicago.” “West Side Story.” But I was trained as a contemporary Martha Graham dancer.

Was Martha around? She must have been pretty old.

Yeah. I had the opportunity to meet her. It was a miracle time. She was obviously not a teacher [anymore], but she came along once as the guru she was, with her arthritis. She was helped out of the car. She was stunning. She had this enormous hair. She sat on the floor and watched us. And all of a sudden, she just went into one of her moves — her spine just got completely straight, and she put her nose on the floor.

We were all just like, what? And then she had all the boys come really close because she didn’t speak up loudly. She said, “The boys must jump in the air.” And so we went in there and we jumped and jumped and jumped, and then we looked at her, and she had fallen asleep. [Laughs] But it was fantastic, fantastic to meet her.

When did you start gymnastics?

I was probably in first or second grade. You have to understand, gymnastics in Denmark was on a completely different level than the rest of the world in the sense that we sucked. I remember there was a Russian club coming to us as a friendship club, and it was just insane how good they were. It was just like, Jesus, we are wasting our time.

How old were you when you switched to dance?

I think it was about 17 or 18 when that happened. So I was a working-class little boy — almost like a Billy Elliot story. I couldn’t really tell my friends what I started out doing. That’s just the way it is when you’re a working-class kid, but then when they eventually found out, I told them to do the math: “How many girls, how many boys?” They were all like, “Yeah, I want to be a dancer as well.”

What was it like dancing again for “Another Round”?

It was like saying hi to an old friend. I’m the kind of dancer that doesn’t dance when I’m out at a club with friends. I’ve always been a little reluctant to do that because, I guess, it was my profession. I knew that this character was rusty and he was not a professional dancer like I was, but he had done it as a young man, as a kid. At the same time, I got a little ambitious.

Did you injure yourself?

Because you were sore?

I was super sore. I do a lot of sports. I bike and I play tennis and I do all kinds of stuff, but it’s not the same muscles.

What were you thinking about in the final dance?

We wanted it not to be about the dance but about what was inside of the character. More than it is a performance, it’s an internal journey. It’s almost like a close-up.