LONDON — Garry Essendine, the celebrated matinee idol, would like it known once and for all that he does not take sex seriously. “To me, the whole business is vastly overrated,” he says to his inner circle of associates, in one of the calculated fits of temper for which he is famous.

But those lucky enough to have been watching Garry for the preceding two hours — which also means watching the narcissistic Garry watching himself — will know that he’s lying. In Matthew Warchus’s hit revival of Noël Coward’s “Present Laughter,” which ended its sold-out run at the Old Vic Theater last weekend, Garry is portrayed, with sublime rue, by Andrew Scott.

Well, not quite hopelessly. Mr. Scott’s Priest was animated by a tug of war between flesh and spirit, in the mold of a less tragic Graham Greene hero. For much of the series he was a gloriously unobtainable object of desire, vibrating with the tremors of devoutly wished, and devoutly denied, consummation.

It was therefore inspired casting to have Mr. Scott play Garry, a part that the debonair Coward created in his own image and a man who, like Ado Annie of “Oklahoma!,” can’t say no when an attractive potential bedmate talks pretty. It was equally inspired to rejigger the original 1939 script in ways that allow Garry to seek his pleasures with men as well as women.

Even more subversive, and compelling, is that for all his vaunted self-discipline, this Garry is at the mercy of a runaway libido. And that he knows it. And that it scares him.

Mr. Scott’s Garry isn’t the only man on London’s stages these days suffering from the slings and arrows of outrageous Eros. More traditionally, the wages of inappropriate lust in drama have been the burden of female characters, from Racine’s Phedre to Tennessee Williams’s Blanche DuBois.

But as befits a moment when the old-school givens of gender relations are being probed and overturned in Western culture, a host of erotically implosive men are allowing top-drawer actors here to embody lost souls who lead with their loins. It feels appropriate that in restaging “A Midsummer Night’s Dream” at the Bridge Theater, Nicholas Hytner reimagined the comedy so that it’s the fairy king Oberon (rather than his consort, Titania) who falls humiliatingly in love with a braying ass.

At the (yes) Noël Coward Theater in the West End, a strapping, sweating Clive Owen is incarnating Williams’s idea of a hot priest in James Macdonald’s affecting revival of “The Night of the Iguana.” Then there’s the predatory movie producer made jiggling (and conspicuously padded) flesh by John Malkovich in “Bitter Wheat.” 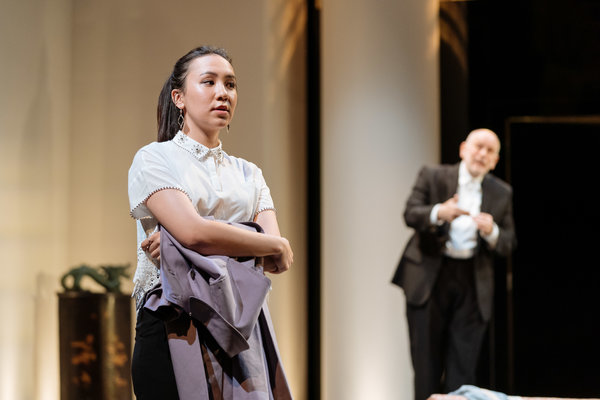 That’s David Mamet’s critically reviled succes de scandale, blatantly based on the recent and precipitous fall from grace of the Hollywood mogul Harvey Weinstein for alleged sexual harassment. Directed by Mr. Mamet, with a comic-strip flatness that does the script no favors, this hot-ticket production at the Garrick Theater is as feeble and facile as most of the reviews would have it.

Wearing a fat suit that transforms him into something like a human bouncy castle, Mr. Malkovich makes no apologies for his loathsome, foul-mouthed character, Barney Fein, who tries to seduce a young Anglo-Korean actress (Ioanna Kimbook, in an exquisitely dignified performance) when his own regular “masseuse” proves unavailable.

O. K., “seduce” doesn’t exactly describe Fein’s coercive behavior. “And now I’m going to drop my pants,” he announces, having lured the actress to his office-cum-apartment on the pretext of a script meeting. “Why?” he asks rhetorically before proceeding to explain, in convoluted terms, what he expects of her.

And there you have the kernel of what’s most interesting about “Bitter Wheat” and what is seldom satisfactorily explored in Mr. Malkovich’s lucid but strictly surface interpretation. As written, Fein is a short-circuiting, pharmaceutically fueled machine of base impulses, politically correct (and incorrect) jargon and the clichés of studio salesmanship.

All the techniques practiced by the players of “Speed-the-Plow,” Mr. Mamet’s earlier and superior Hollywood satire, have been spliced into a single disheveled package. It’s as if Fein is a human paper shredder of his own press clippings, who’s damned if he can paste them back together into a coherent identity.

Mr. Malkovich’s cool, almost monotone line readings don’t convey the frightening surrealism of such a meltdown. And I found myself wondering what, say, a more overtly passionate actor like Nathan Lane — who won a Tony for playing another monster under siege, Roy Cohn, in the recent revival of “Angels in America” (and who appeared in the 2008 Mamet political farce “November”) might make of the part.

In “Iguana,” Mr. Owen — who adroitly plumbed the depths of sexual compulsion in the film “Closer” — is an unusually virile, almost gangsterish Shannon, with little of the expected touch of the poet. (His American accent, though convincing, is hardly genteel.) This makes his character’s self-hating affinity for underage girls even less palatable than usual.

But as a defrocked minister turned tour guide to a gaggle of Texans from a Baptist women’s college, seeking sanctuary in a seedy Mexican resort, Mr. Owen commits fully and persuasively to rendering the physical agonies of a depressive alcoholic who exists in a state of what another character describes as “a kind of voluptuous crucifixion.”

He is ably assisted in his torments by two fine actresses. Anna Gunn (of “Breaking Bad”) is the lusty Maxine, the resort proprietor said to be “bigger than life and twice as unnatural.” (Bette Davis originated the part.) She’s not quite that. But she’s unexpectedly touching in her realistic portrayal of a woman making the enjoyable best of a bad hand.

And as Hannah Jelkes, the tourist-hustling watercolorist who travels the world with her ancient poet grandfather (Julian Glover), a brilliant Lia Williams is a perfect compound of slyness and sincerity. She understandably appeals to Shannon’s truest spiritual side, and you sense an innate affinity between them.

Then again, there’s the little matter of sex, and Miss Jelkes cannot bear to be touched. Anyway, because they might make each other happy, and because this is a Tennessee Williams play, it is most unlikely that they would ever wind up together.

“Present Laughter” offers another almost made-for-each-other couple. That’s Garry and his estranged wife (and indispensable professional associate) Liz (the excellent Indira Varma). She’s the cool pragmatist to his melodramatic posturer, and they share the drolly restricted worldview of people who live for the theater.

You strongly suspect, though, that Garry prefers the company of men in bed. (His eyes narrow trenchantly in recollection of presumed male conquests past in ways they never do for their female equivalents.) In this version, the disruptive, ambitious outsider who goes after Garry (and is married to one of his closest associates) has undergone a gender change. The character Joanna has been reinvented as Joe, played by Enzo Cilenti as an old-style continental gigolo.

Mr. Scott isn’t the classically suave Garry, embodied on Broadway two years ago to a Tony-winning fare-thee-well by Kevin Kline. Granted, Mr. Scott’s version also relishes his theatrical poses, and he trots them out most entertainingly as he dispatches his latest one-night stand — young, clingy debutante (Kitty Archer) he has unwisely brought home from a fancy-dress party.

The revolutionary aspect of Mr. Scott’s interpretation lies in its subliminal streaks of lonely darkness. (He was a marvelously thin-skinned “Hamlet” in London several seasons ago.) You imagine that despite being a man of the permissive theater world, Garry is well aware of the dangers of being gay in mid-20th-century Britain.

He delivers such a commandingly conflicted performance that I wish so many of the other roles weren’t pitched at such a boisterously farcical level. Nonetheless, when the show ends, with Garry and Liz alone in harsh contemplation of their shared future, you understand why this production’s program features the play’s original title under the better-known “Present Laughter.”

Ben Brantley is the co-chief theater critic for The New York Times. He has been a staff critic since 1996, filing reviews regularly from London as well as New York. Before joining The Times in 1993, he was a staff writer for the New Yorker and Vanity Fair.