How Much Watching Time Do You Have This Weekend

This weekend I have … a half-hour, and I need a pick-me-up 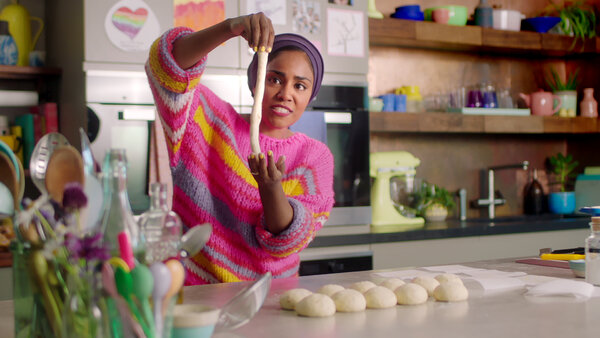 ‘Nadiya Bakes’
When to watch: Now, on Netflix.

Nadiya Hussain, everyone’s favorite winner of “The Great British Baking Show,” has a new cooking series, and it’s so sunny and cheery it might be the cure for seasonal, and perhaps even clinical, depression. “Baking really is my happy place,” she says in the show’s intro. But even if she hadn’t, it’s obvious in every frame of the show, whether she’s chuckling while smashing up hard candies for a cookie filling or pulling a dish out of the oven and raving, “These noodles have been to the disco.” What a treat.

‘Supervillain: The Making of Tekashi 6ix9ine’
When to watch: Sunday at 10 p.m., on Showtime.

This three-part documentary, airing the next three Sundays, is an intriguing, sometimes demoralizing, look at the life and career of the rapper born Daniel Hernandez and known today as 6ix9ine. Beyond the archival footage and talking-head interviews, “Supervillain” uses an unusual narrative technique to comment on the deliberateness and artificiality of 6ix9ine’s persona: constructing an action figure of sorts while explaining the poisons of viral fame and the characteristics of supervillainy. Sometimes these segments feel a little forced, but better to be different than boring.

… a few hours, and it’s time to play the music

‘The Muppet Show’
When to watch: Arrives Friday, on Disney+.

All five seasons of “The Muppet Show” land on Disney+ this weekend, including seasons that were not previously available on DVD releases over the years and segments that aired only in Britain. (Two of the series’s 120 episodes remain trapped in rights purgatory.) As sketch shows go, this is one of the greats, and any given episode will have slapstick goofiness, a great cover of a song and sometimes, as a bonus, a piercing understanding of the shabbiness of humanity. If you don’t know where to start, try the episodes hosted by Rita Moreno, Rudolf Nureyev, Harry Belafonte and Joan Baez.