Our TV critic recommends a new show about shipwrecks, another about chain saws and a South African murder mystery.

This weekend I have … an hour, and I’ve watched everything. 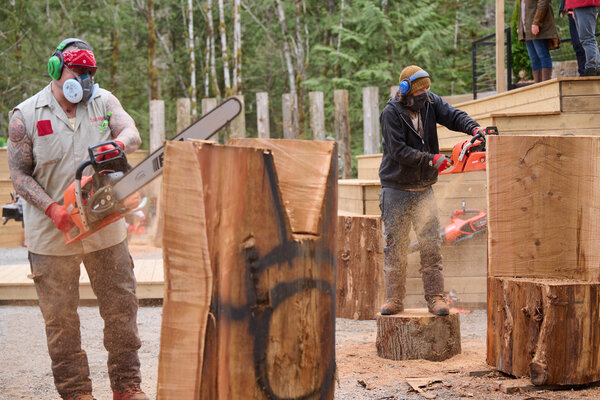 Finally: a reality contest show for chain saw carvers. “Cut” is part of the post- “Great British Baking Show” shift toward friendlier, warmer, lower-conflict fare — less glossy than “Top Chef,” less crabby than “Ink Master,” and instead more like “Blown Away” or “Making It.” Think happy vibes that feature talented artists working in interesting disciplines, many of whom seem absolutely shocked to be on television. The process of carving is fascinating and telegenic, and the finished pieces are often stunning. If you like sculpture but wish it were louder, watch this. (This week is Episode 2; you can catch up on the Discovery website or just jump in — you know how competition shows operate.)

‘Shipwreck Hunters Australia’
When to watch: Now, on Disney+.

The wildlife photography here is reason alone to watch, with soaring aerial shots and plenty of underwater footage around Australia. “Shipwreck Hunters” is also surprisingly relaxed, without the ginning up of tension so endemic to reality television. Instead, the show blends adventure and real reverence, sometimes to beautiful effect and sometimes to jarring contrast, as when the shipwreck hunters stroll down a gorgeous beach while discussing a young cabin boy who died in a wreck 100 years before. “Was he in his last moments screaming for his mom?” one of them wonders, then jumps right back into planning the dive.

‘Recipes for Love and Murder’
When to watch: Now, on Acorn.

This 10-episode South African drama combines sunny pep and a colorful palette with a grounded understanding of domestic violence and racism, striking a tone that’s charming and fun but still substantive. Maria Doyle Kennedy stars as recipe writer turned advice columnist whose work takes a turn when an abused advice seeker is murdered, prompting the writer and a colleague to investigate the crime themselves. If your taste in murder shows tends more toward “Death in Paradise” or “My Life Is Murder” than to “Broadchurch” or bleak Scandinavian shows, or if you just love sumptuous cooking montages, watch this.