How Quentin Tarantino steals from other movies 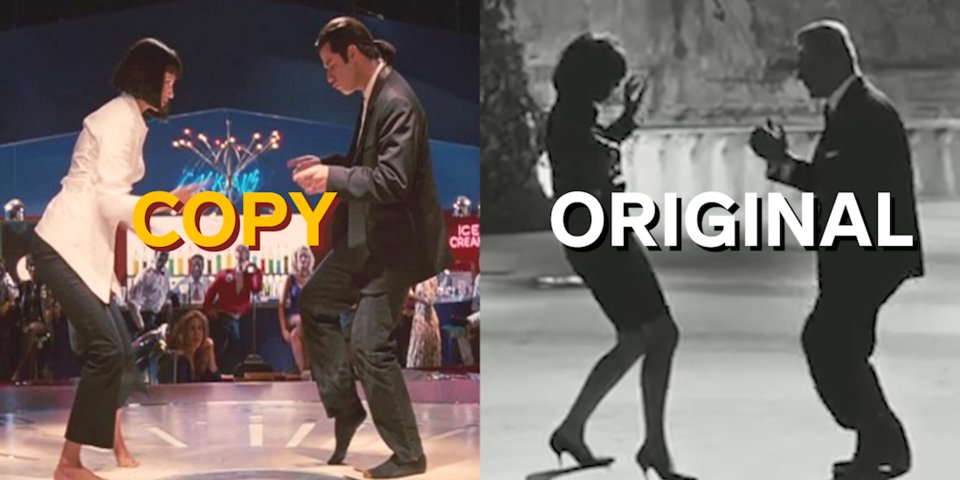 Following is a transcript of the video.

You don’t have to be a movie buff. Maybe you don’t even like movies that much. But everyone has heard of the name Quentin Tarantino. He is, without a doubt, one of the most celebrated directors of our time, with each of his eight iconic works making a profound impact on the history of cinema and inspiring generations of filmmakers with a vastly new style and approach to filmmaking that can only be described as Tarantinoesque, which, by the way, is now an official entry in the Oxford English Dictionary. So, what makes the films of Quentin Tarantino so special? Many often cite his razor-sharp dialogue. The often graphic, yet stylized, violence. Or his use of nonlinear narrative structure. But what truly sets him apart from every other filmmaker is the way in which he steals from other movies. And that’s not just a figure of speech.

In a 1994 interview with Empire magazine, Tarantino said, “I steal from every single movie ever made.” Tarantino’s visual references to movies have become his trademark. Some of these references are merely hinted at. While others are almost identical replications. For this reason, he’s been the center of controversy for many years. For example, in 1997, his debut film, “Reservoir Dogs,” was under heavy scrutiny after a critic accused Tarantino of plagiarizing the 1987 Hong Kong crime film “City on Fire.” The final 20 minutes of “City on Fire” is essentially identical to the plot of “Reservoir Dogs,” and there are shots and moments scattered throughout that directly resemble each other. Including this famous Mexican-standoff sequence. But it’s not just in this film. Almost all of Tarantino’s eight films have a main source of inspiration. For “Jackie Brown,” it was the 1974 film “Foxy Brown.” For “Kill Bill,” the 1973 Japanese film “Lady Snowblood.” And his “Inglourious Basterds” is, in a lot of ways, similar to the 1967 war film “The Dirty Dozen.” And on top of that, each film has more visual references to at least another dozen movies. Many consider these similarities homages, a practice as long as the history of cinema itself, a way for Tarantino to pay respect to the movies he loves. But Tarantino explicitly denies this. In the same interview, he goes on to say, “Great artists steal. They don’t do homages.” It’s a quote that closely resembles words attributed to another famous artist: Pablo Picasso, who’s often quoted as having said, “Good artists copy, and great artists steal.”

To understand why and how Tarantino steals, it’s important to understand his background. Tarantino’s career in film didn’t start in a classroom or even a movie set, but a video store, where he worked as a clerk and gained a reputation for his almost encyclopedic knowledge of cinema. In other words, Tarantino was never taught how to make a film. Instead, he learned how to make films by watching them, which makes it natural that imitation became his main source of inspiration and style. In fact, if you take a look at most of Tarantino’s screenplays, they begin with a list of filmmakers whom the stories were inspired by and dedicated to. I think the reason why Tarantino is so proud to admit that he is stealing is because he accomplishes something with it that no other filmmaker is quite capable of: creating something new. And as paradoxical as it may sound, Tarantino’s movies have a sense of originality to them, despite their many sources of inspiration. This is why Tarantino is often hailed as one of the quintessential filmmakers of postmodernism.

Postmodernism in film describes an era when filmmakers began questioning the ways in which mainstream movies are made and told and began making movies that went directly against it. One of the central tenets of postmodernism is the idea that nothing is new in art; everything is recycled and reused over and over again. “Reservoir Dogs” might have stolen the Mexican standoff from “City on Fire,” but “City on Fire” also stole it from the 1966 film “The Good, the Bad and the Ugly.” And “Pulp Fiction” is no exception; it’s chock-full of references to classical movies, especially movies from the French New Wave movement, one of the most influential movements in the history of cinema, in which young filmmakers also tried to challenge the traditional method of filmmaking. Its famous dancing sequence was inspired by this sequence from the 1964 film “Band of Outsiders.” And the choreography closely resembles this scene from the 1963 film “8 1/2.” But that’s not the only source it steals from. John Travolta’s dance was inspired by this scene from 1966 adaptation of “Batman,” while Uma Thurman’s dancing resembles that of a cat in the 1970 animated film “The Aristocats.” And throughout the rest of the film as well. The mysterious suitcase that carries the plot of the film is a replication from the 1955 American film “Kiss Me Deadly.” And, of course, this scene was inspired by Alfred Hitchcock’s “Psycho.” What makes Tarantino so special is that he never steals from one source. He rather steals from multiple sources spanning decades and then stitches them together to create something new. It’s a technique known as pastiche, a vital element in postmodernism. Most people are more familiar with this technique through another medium: music, and especially in the hip-hop genre, where artists use sampling to take part of an existing song to create something new. And just like Tarantino, it’s been the subject of controversy many times.

Tarantino’s pastiche works so well because of two reasons. One is his understanding of the subject he’s stealing from. More often than not, homages in movies are a shallow and vain attempt at imitating an iconic moment, and they rarely serve a purpose. But Tarantino’s references are often seamless and easy to miss because they enhance the scenes and the genre he experiments with. And if you take a look at Tarantino’s career, each of his eight films is a tribute to a specific genre and movement in cinema. “Reservoir Dogs” is a pastiche of the gritty Hong Kong crime films, and “Pulp Fiction” is based on the unconventional French New Wave movement. “Jackie Brown” basis itself off the ’70s’ controversial blaxploitation films, while “Kill Bill” is reminiscent of the classical Japanese samurai and Chinese kung fu movies. “Death Proof” pays tribute to low-budget exploitation movies, while “Inglourious Basterds” references World War II cinema. And his two most recent films, “Django Unchained” and “The Hateful Eight,” are modern takes of the Italian spaghetti Westerns. Tarantino seamlessly blends all these genres and inspirations through his unique vision and writing. This is where his razor-sharp dialogue comes in.

It’s not an exaggeration to say that Tarantino’s films are essentially re-adaptations of classical films and genres that take place in a world of Tarantino, where violence, injustice, sex, and satirical cynicism flourish. Quentin Tarantino perhaps knows better than anyone that you don’t have to look far for inspiration. Most of the time, it might be somewhere close and familiar to us. My guess is that, for Tarantino, it’s in the aisles of VHS tapes that he grew up watching as a child. Tarantino proudly plays the role of a masterful thief of cinema. And as long as he continues to make a masterpiece out of them, it’s the kind of thievery I’d be more than happy to accept.

END_OF_DOCUMENT_TOKEN_TO_BE_REPLACED

END_OF_DOCUMENT_TOKEN_TO_BE_REPLACED
We and our partners use cookies on this site to improve our service, perform analytics, personalize advertising, measure advertising performance, and remember website preferences.Ok