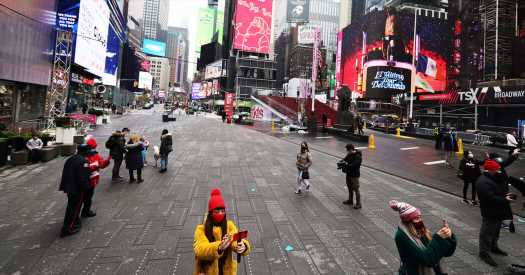 What becomes of Times Square when you take away hundreds of thousands of cheering, shivering New Year’s Eve revelers?

It may no longer be the “biggest, most exciting New Year’s Eve party on Earth.” But it may still be the night’s biggest TV production set.

For this year’s pandemic New Year’s Eve, many television traditions will be scrapped, including the scenes of raucous celebrations across the world and impromptu interviews with exuberant party goers at bars and clubs, eager to say hello to their mothers and grandmothers back home.

Instead, networks are doubling down on the segments that they can safely pull off. They’ve increased the number of performers and interview guests, decreased the number of crew members and brainstormed creative — and socially distant — locations to send their reporters to. (Instead of reporting from a crowd of partyers, for example, one CNN correspondent will report from a crowd of puppies, which are not known to spread the coronavirus.)

So while the type of people who enjoy cramming themselves into crowds of strangers to watch the ball drop may be disappointed this year, the type that prefers to curl up and celebrate from their sofas will find their tradition largely intact.

“In some respects it’s going to feel very similar to previous years,” said Meredith McGinn, an executive producer of NBC’s New Year’s Eve program, which is hosted by Carson Daly. “You will see the same confetti fly at midnight; you will see the ball drop.”

But, like most things in 2020, there were some necessary adjustments.

“Dick Clark’s New Year’s Rockin’ Eve” on ABC will send Ryan Seacrest roaming around a much emptier Times Square with a camera crew in tow — wearing a mask except when standing in designated areas. And CNN’s hosts, Anderson Cooper and Andy Cohen, will reunite in Times Square for an evening of interviews and cheeky ad-libbing. (The hosts are close friends who have been in each other’s social “bubbles” during the pandemic.) 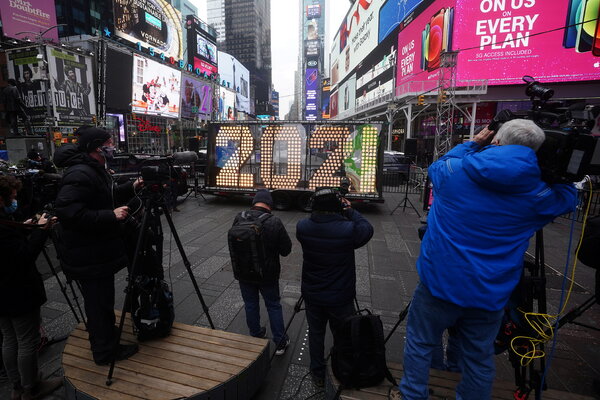 In a typical year, Cooper and Cohen invite interview guests up to their riser overlooking the crowds; this year, the network will superimpose images of the guests’ full bodies beside the hosts in a technique that they will jokingly call “teleportation.” On NBC, rather than cutting to raging parties, the network will broadcast small family gatherings from inside their homes. Even the Times Square production set is smaller: While it typically stretches from 41st Street to 59th Street; this year it is limited to a space between 45th Street and 47th Street.

“We had to reinvent Times Square,” said Jeff Straus, the president of Countdown Entertainment, which co-produces the event with Times Square Alliance. He described the set up as a theater in the round, with two stages at the center. Three huge screens will provide close-ups of what’s happening onstage for the small number of guests.

Emergency medical workers, frontline workers and essential workers were invited to bring their families to sit in specially designated areas in Times Square and watch the array of performances. In total, somewhere between 100 and 160 guests are expected to be present for the 11 scheduled musical acts, including a seven-minute show by Jennifer Lopez leading up to the final countdown. Those guests will be the subjects of the on-camera interviews, rather than the partyers among dense crowds of people, some of whom wait in Times Square for a dozen or more hours to ensure good spots.

To pull off the broadcast, networks must follow state guidelines on pandemic television production, as well as protocols set by the various unions representing the crews and performers. They’ve devised plans for testing production staffers for Covid-19 before New Year’s Eve and for feeding production staffers without letting them get too close to one another. (NBC rented additional space in Times Square to make sure crew members could eat and maintain proper distance.)

On Thursday, network employees will work from separate locations when possible. The director of “Dick Clark’s New Year’s Rockin’ Eve,” Glenn Weiss, is overseeing the broadcast from his office on 46th Street instead of in the “Good Morning America” studio at Broadway and 44th Street. And NBC cameras are stationed on the third floor of the Renaissance New York Times Square Hotel, where the network had to remove some of the hotel’s windows so that bird’s-eye-views of the event would not be hindered by glare.

All of the acts at Times Square will be live, including performances by Lopez, Gloria Gaynor, Billy Porter, Cyndi Lauper and Pitbull. Many other performances will occur on stages outside of New York — including those by Brandy, Megan Thee Stallion and Miley Cyrus, all from Los Angeles, for ABC.

The networks have lined up more pretaped material than usual, however. (Most have not said which of the performances were filmed in advance.)

On PBS, a New Year’s Eve program, called “United in Song,” was filmed in November at the John F. Kennedy Center for the Performing Arts and in September at George Washington’s Virginia estate in Mount Vernon, where about 120 audience members watched from a distance and masked violinists were separated from unmasked brass players with plexiglass. NBC is showing a new Blake Shelton music video. Spectrum News NY1 will roll a highlight reel of its reporter Dean Meminger’s flashy New Year’s Eve suits over the years.

And networks are getting creative in other ways to fill the holes formerly filled by crowd shots and partyers. CNN will have one correspondent getting a tattoo, another skiing down an Oregon slope wearing a GoPro and an appearance from Carole Baskin of “Tiger King” fame.

With the pandemic driving people away from bars and restaurants and toward their living rooms, executives say it’s possible that there will be more viewers than ever before. ABC, which tends to have the highest viewership on the holiday, peaked last year at about 21 million viewers, according to news reports.

“I can never predict what the Nielsen gods will bring,” said Mark Bracco, an executive producer on ABC’s program, “but we’re hopeful that most Americans will be home on their couches.”

In a year in which more than 338,000 Americans have died from the coronavirus, viewers may notice a tonal shift compared with the goofy — and sometimes tipsy — coverage of years past. The Champagne popping and 2021 eyeglasses will be interspersed with appreciations of health care workers and emergency medical workers, as well as reflections on the lives lost and the economic hardship.

On ABC, Seacrest will interview President-elect Joseph R. Biden Jr. and his wife, Jill Biden, a rare political interview of someone other than the New York City mayor.

And on PBS, an opening performance of “Lady Marmalade” by Patti LaBelle in a gleaming white suit opens the hour-and-a-half program that includes more serious notes, including a monologue from the actress Audra McDonald about trailblazing women throughout history and from the playwright and actress Anna Deavere Smith about the history of the slave cemetery at Mount Vernon as she walks through those grounds. On CNN, John Mayer is slated to perform a tribute to lives lost this year out of Los Angeles.

END_OF_DOCUMENT_TOKEN_TO_BE_REPLACED

END_OF_DOCUMENT_TOKEN_TO_BE_REPLACED
We and our partners use cookies on this site to improve our service, perform analytics, personalize advertising, measure advertising performance, and remember website preferences.Ok