If heatwave hits 42°C bees may ejaculate themselves to death 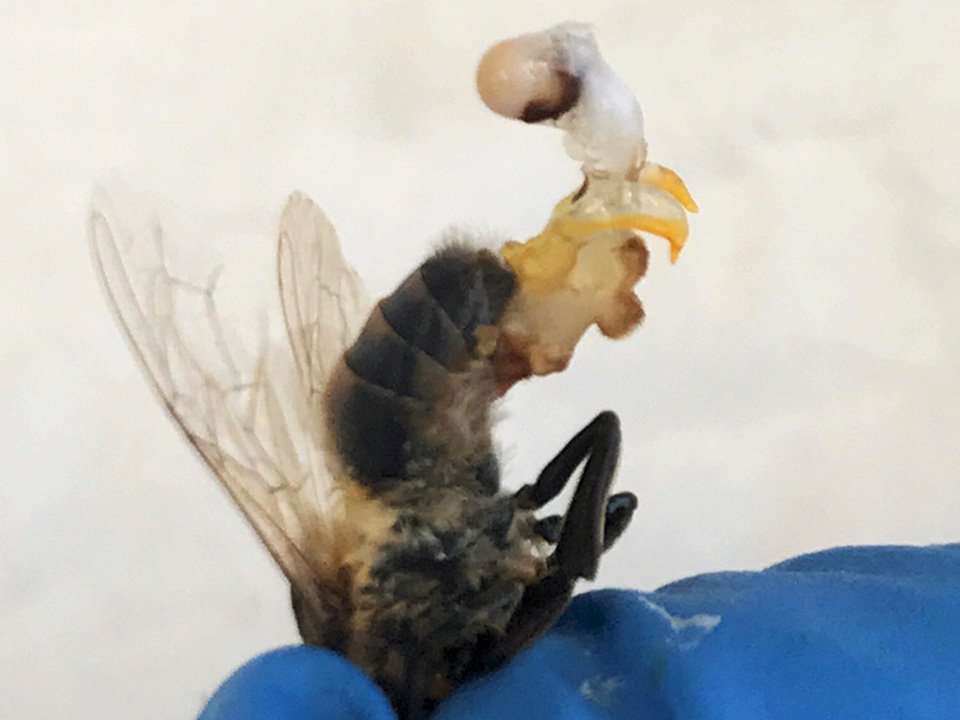 One more thing to worry about in the heatwave we’re facing is the gruesome death of honey bees, who have been found to suffer a difficult fate when it gets too hot.

Research reveals they can literally ejaculate themselves to death in extreme heat.

When male worker bees are subjected to very high temperatures their bodies begin to convulse, which forces them to ejaculate their abdomen-sized penis-equivalent out of their body and die from the shock.

To a casual onlooker it may look like the bee spontaneously exploded, but new research has shown there to be a bizarre sexual component to this final act.

Bees try to maintain a body temperature of 35°C, and if things get as hot as 42°C then half of drones will die within six hours.

The Met Office has issued an extreme heat warning from Sunday to Tuesday, with the UK potentially recording its highest ever temperature.

With immense heatwaves rocking Europe, scientists are looking at developing new ways to cool them down and prevent deaths from heat exhaustion.

Dr Alison McAffee, a postdoctoral fellow at UBC’s Michael Smith Laboratories focusing on bee health, said: ‘When drones die from shock, they spontaneously ejaculate. They have this elaborate endophallus that comes out and is about the size of their own abdomen. It’s pretty extreme.’

McAfee says she was first alerted to the phenomenon after noticing a high level of bee deaths following a heat wave in British Columbia during 2021.

Beehives typically maintain a temperature of around 35°C, and although the Columbian bees should have been able to cope with the temperature, the excess heat ended up killing many of them off.

‘We know that after six hours at 42°C, half of drones will die of heat stress,’ Dr McAfee said.

‘The more sensitive ones start to perish at two, or three hours. That’s a temperature they shouldn’t normally experience, but we were seeing drones getting stressed to the point of death.’

After the first ‘drone apocalypse’, Dr McAfee and her team conducted a series of experiments to test hive insulation materials, in order to prevent another wave of mass-deaths during future heatwaves.

Some of these methods included coating beehives in a protective polystyrene cover, which helps cool the hive by up to 3.5°C.

Meanwhile, another method devised by fellow beekeeper Emily Huxter involved providing each colony with a feeder full of sugar syrup to act as a bee cooling station.

‘Bees will naturally go find water to bring back to the hive and fan it with their wings to cool down, which achieves evaporative cooling much like we do when we sweat,’ Huxter said.

‘Giving them syrup nearby should let them do the same thing, and the sugar in it motivates them to take it down faster.’

Following her research, McAfee now believes drones may be one of the most effective indicators of climate change.

‘Drones have the advantage that they are very sensitive and easy to see. If drones are dying, it’s much easier to study them than to take a queen from a colony to perform tests. It’s also more conducive to citizen science efforts,’ she said.

During a prior study conducted in 2020, queen bees were found to contain five different proteins which could be used to indicate whether they had experienced heat shock.