In the British Countryside, a Holiday Feast With Sofa-Shaped Butter

Hosted by Alex Willcock and Felix Conran, the father-son founders of the furniture brand Maker & Son, the gathering celebrated their family’s love of all things design. 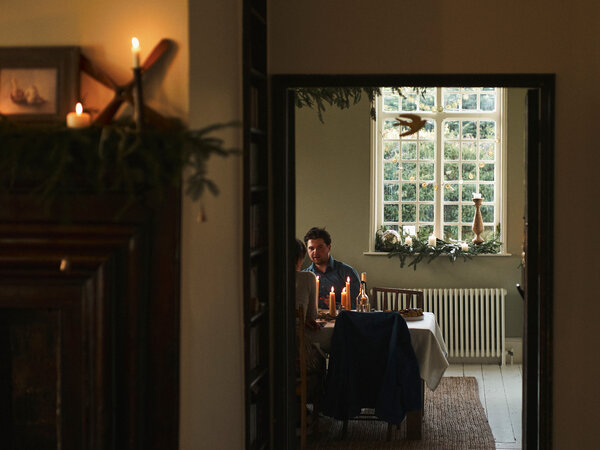 It’s hard to tell where business ends and family begins for Alex Willcock, 57, and Felix Conran, 27, the British father-son founders of the furniture brand Maker & Son. Willcock was introduced to Conran’s mother, the interior designer Sophie Conran, in the early 1990s by his employer at the time, the design and restaurant impresario (and Sophie’s father) Terence Conran, who died last year. So it was perhaps inevitable that the couple’s two children would become passionate about design as well (their daughter, Coco Conran, has a fashion line). And since Conran and Willcock established their business in 2018, Willcock’s home, Kemps House — a 17th-century brick manor in West Sussex into which he moved with his second wife, Charlie Kinsman, 17 years ago — has served double duty as the company’s headquarters and showroom. Almost every room features at least one of the brand’s voluptuous yet modern sofas, armchairs, beds or love seats, all made entirely from natural materials and upholstered in linens, velvets and brushed cottons in a palette of rich, earthy shades from moss green to burnt sienna.

The house was designed by the British architect John Kemps in the 1660s. “He did a lot of the housing in the local area, but he made this one for himself,” says Willcock. With its original 17th-century elm and oak staircase, high ceilings and huge sash windows, “it really does have its own spirit and energy,” he says. But it is also imbued with the creativity of its current inhabitants. In the early 1980s, Willcock trained as a cabinetmaker at the celebrated British furniture designer John Makepeace’s Parnham House — a 16th-century home in Dorset that Makepeace then ran as a craft school and where Willcock first met Terence and studied under luminaries like the British modernist architect Norman Foster and the postmodern Italian designer Ettore Sottsass — and his carpentry tools can be found throughout Kemps House. As can many of the family’s creations from over the years, including, in the large living room, delicately ribbed glass serving bowls made by Willcock and Conran; in the light-filled kitchen, thick-rimmed white bistro plates designed by Willcock and Terence; and, in a number of rooms, sculptural lights by Conran whose curls of ultrathin maple veneer hang from the ceiling like upside-down fountains. “There are far more pieces in the house that have been made by us or someone we know than pieces that aren’t,” says Conran, with a laugh.

Earlier this month, this craft-filled home was the setting for a festive lunch hosted by Willcock and Conran for a small group of family members and friends, including Tony Niblock, the co-founder of the kitchen company Plain English; Tawanda Chiweshe, the designer and studio director at Alaska Alaska c/o Virgil Abloh; the jewelry designer Emma Milne-Watson; and Brogan and Sebastian Cox, the wife-and-husband designers behind the furniture brand named after the latter.

The meal, held before the latest wave of the pandemic, was conceived as both a celebratory pre-Christmas get-together and as a paean to the mother of all inspirations: nature. An appetizer served along with sparkling rosé in the woodlands behind the house was followed by lunch at a foliage-strewn table indoors. Roast beef rib, buttermilk Yorkshire puddings and seasonal vegetables including fennel and butternut squash preceded a dramatic and particularly well-received dessert: an orange and almond Bundt cake, flambéed at the table and accompanied by a rich frozen custard whose leftovers guests sneaked into the kitchen to enjoy as the party continued into the late afternoon. Here Willcock and Conran explain how to pull off a similarly warm and memorable winter gathering.

The meal began with an elegant, slightly mischievous appetizer: narrow strips of toast made from bread Conran had baked that morning (a nutty wholemeal loaf and a springy sourdough), homemade butter (sculpted, for a whimsical touch, into the shape of a Maker & Son sofa) and brown, salty Arroyabe anchovies from Cantabria, Spain. “With this dish, which is such a simple thing, you have to get each element completely right,” says Conran. “There’s nowhere to hide, so it becomes about the ingredients themselves. It was a chance to challenge the guests a little — so many people tell me they don’t like anchovies — and to give them something to talk about.” Copper-colored sparkling rosé from the local vineyard Black Dog Hill served in crystal coupes from the Dorset housewares boutique Brassica Mercantile (whose founder, Louise Chidgey, used to work with Willcock at the design store the Conran Shop in London) helped wash any lingering skepticism away.

The appetizer was served in the small, wooded area above the home’s back garden in and around the roundhouse, a 16-square-foot curve-walled hut clad in cedar shingles that Willcock had built as a kind of meditation retreat using reclaimed Georgian doors and windows from a nearby salvage yard. Guests sat inside, on an enveloping Maker & Son armchair and love seat that flanked the structure’s wood-burning stove, or chatted beside a nearby bonfire. The walk back to the house for the main course not only allowed guests a different view of the building — “the front of the house has this wonderful symmetry while the back is a crazy mishmash of windows,” says Willcock — but it also helped switch up the mood. “We moved from this quite primal setting outside, through the kitchen, where the food was being prepared, and into the main lunchroom, which we’d kept out of sight when everyone arrived, for the big reveal,” he says. “There’s something very nice about changing the scenery like that,” Conran adds. “It turned the main course into an occasion.”

Forage for Decorations and Ingredients Alike

Anita Bell, the senior stylist at Maker & Son, brought the estate’s outside in by stringing a garland of foliage — a wild chandelier of sorts made of branches from the garden’s 30-year-old eucalyptus tree and from a sequoia with lush, fir-like fronds — above the dining table. That same greenery accented the mantelpieces and serving tables and ran the length of the old draper’s table at which the guests sat. The menu, too, drew inspiration from the home’s surroundings. “It’s important to use seasonal produce as much as you can, to remind guests of the ultimate source of everything we eat,” says Willcock. Forty-day-aged roasted beef rib was accompanied by anise-spiced fennel, nutmeg-warmed butternut squash and fresh horseradish foraged the morning before by Conran’s girlfriend, the documentary filmmaker Emily Smith. (She and Conran, who live together in London, met through her Instagram account, @down2forage.)

“At this time of year, there’s nothing like the combination of velvet upholstery and candle or firelight,” says Willcock. “When possible, I love using beeswax candles made in the nearby town of Lewes, which throws a bonkers Pagan ritual-style celebration with fireworks each November. The candles burn with a particularly warm glow and give off a subtle honeyed scent.” Golden wax tapers stippled the dining table, some in carved wooden candlestick holders made by Willcock himself, others free-standing and dripping onto the tablecloth, a Maker & Son design in an ultraheavy white linen the company imports from Florence and uses for sofa and cushion covers. Even as sunlight streamed through the room’s oversize windows, the candles created an intimate, cozy feel.

Be Kind to Yourself

“I like to work backward when planning a menu,” says Conran. “I think about the most time-sensitive dishes and work around those and the oven space I have available.” With this in mind, he chose an appetizer (the toast, butter and anchovies) that only acquired a short period of assembly before guests arrived, a side dish (potato dauphinois) that could be cooked in advance then simply crisped when the time came and a dessert (the almond-orange cake and frozen custard) that could move directly from the freezer to the table. This allowed ample time and room in the kitchen for him to prepare the slow-roasted beef and vegetables, and ensured that he remained a calm host. “If you’re able to enjoy the day, there’s a good chance other people will, too,” he says.

Choose an Activity Befitting the Crowd

Given the group’s love of furniture and design, after dessert Conran and Willcock introduced one of Terrence’s favorite dinner party games: making miniature chairs from the cages used to hold corks in champagne bottles. Each guest was given one of these pliable metal frames and Conran and Willcox showed how, with careful manipulation, the pressed metal top becomes the chair’s seat, the wire its back and legs. Going one step further, Sebastian Cox used the table’s foliage to create a voluminous wing-backed armchair. “I always like to have an activity, even if it’s really silly,” says Conran. “It’s playful and engaging and gives everyone something to remember the lunch by. Whenever anyone describes a meal they enjoyed, they don’t start with the food, they start with the where, the who, the how.”