In the Land of Too Much Television, This Nerd Is Queen 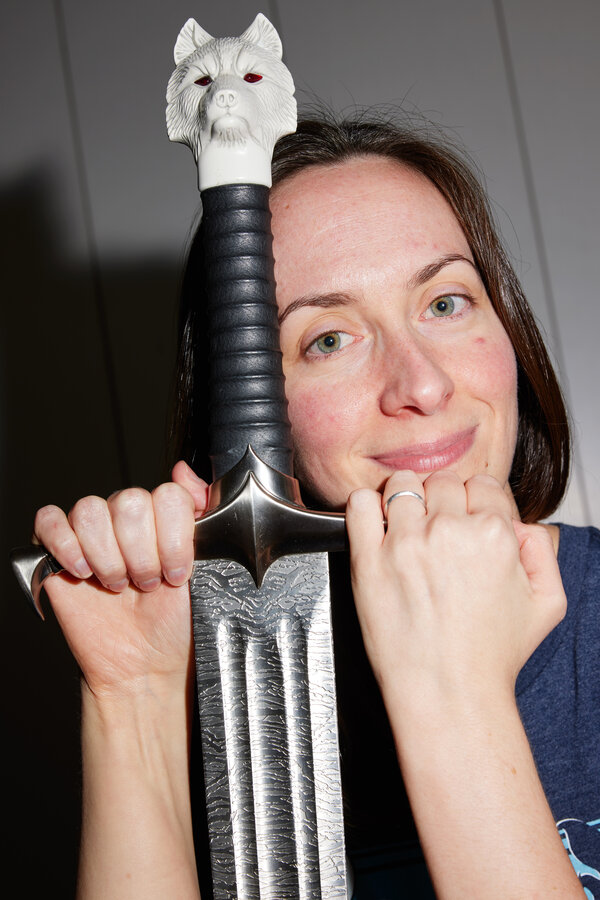 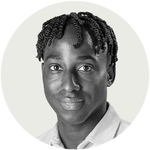 For millions of people who tune in each week, keeping up with HBO’s “House of the Dragon” is a diverting pastime; for Mallory Rubin, it’s more like a professional sport.

Rubin makes two weekly podcasts about “Dragon,” the “Game of Thrones” prequel series. To train, she watches each episode a minimum of three times and then prepares a discussion outline, typically running seven or eight pages, cross-referencing the show with the original books by George R.R. Martin and eight seasons of “Thrones.” (Rubin has watched every episode of “Thrones” more than a dozen times.) Many podcasts live or die by the charisma of the host or co-hosts. But Rubin’s shows — “Talk the Thrones,” an instant reaction show with Chris Ryan and Joanna Robinson, and “House of R,” which offers more detailed analysis, with Robinson — rest equally on her evident mastery of her material.

A self-described “huge nerd,” and the head of editorial for The Ringer, Rubin has an inexhaustible passion for — and near-encyclopedic knowledge of — many of the most popular fictional universes of the last century. She is a former co-host, with Jason Concepcion, of the hit podcast “Binge Mode,” which featured close readings of “Game of Thrones,” the “Star Wars” saga, the Harry Potter books and 25 movies in the Marvel cinematic universe, among other titles.

It would be hard to engineer a commentator better equipped for this moment, when growth-obsessed streaming services and movie studios have coaxed audiences toward the outer limits of franchise entertainment. In addition to the two “House of the Dragon” podcasts, Rubin and Robinson co-hosted one about Amazon’s “The Rings of Power,” based on J.R.R. Tolkien’s appendices to “The Lord of the Rings,” and will begin another about Disney Plus’s “Andor” — the prequel to a prequel of the first “Star Wars” trilogy — later this month.

“I think maybe one day in my life I will arrive at a point where fatigue starts to set in,” said Rubin, 36. “I don’t find that to be a part of my experience, currently.”

Rubin began her career as an editor and blogger for the website of Sports Illustrated (she still covers football and baseball at The Ringer) but found a natural home in podcasts, where many listeners turn for deeper engagement with news and culture. “The Ringer-Verse,” an omnibus feed that houses “Talk the Thrones” and “House of R,” among The Ringer’s other nerd-culture shows, regularly appears at the top of Apple Podcasts’ TV & Film chart. (The company, which is owned by Spotify, doesn’t share listener figures.)

Explore the World of the ‘Lord of the Rings’

The literary universe built by J.R.R. Tolkien, now adapted into a new series for Amazon Prime Video, has inspired generations of readers and viewers.

The peak-TV era has wrought a golden age for TV podcasts. (Podcasts are perhaps the only form of media that has expanded more quickly in recent years than television; Spotify now hosts more than 4.4 million podcast titles, up nearly 800 percent from 2019.)

“It’s a trend that has grown steadily in the last few years,” said Todd Cochrane, the chief executive of Blubrry, a podcast hosting and analytics company. “For shows that have huge or rabid fan bases, anything that gives an insider view or analysis seems to be very, very popular.”

Many new shows now launch with their own official podcasts. Fan-led recaps of new series (“House of the Dragon” is the subject of dozens, in addition to an official podcast from HBO) and old ones (“The West Wing,” “The Office,” “Gilmore Girls”) are part book club, part ESPN postgame show, attracting listeners who want to relive or extend the pleasure of being absorbed by a beloved story.

In a pair of video interviews from her home office in Los Angeles, Rubin, who has a broadcaster’s perpetually caffeinated temperament, was framed by assorted tokens from a life of fandom. A Grogu figurine from “The Mandalorian,” a replica of Thor’s hammer and a plush doll of Ghost — Jon Snow’s direwolf on “Game of Thrones” — sat atop a bookshelf lined with Marvel comics. Among her most prized possessions are life-size reproductions of Obi-Wan Kenobi’s lightsaber and Jon Snow’s sword.

“I have a bizarre amount of what I can only describe as weaponry,” she said.

Rubin’s love of fantasy fiction began with another bookshelf, in her childhood bedroom in Reisterstown, Md., a suburb of Baltimore. Her father, an environmental policy consultant, filled it with books he hoped they’d enjoy together, including Tolkien’s “The Hobbit.” After inhaling the “Lord of the Rings” series, she later turned to “Star Wars” movies, “Dune” and Harry Potter. The stories became a point of connection for the family — her mother is a former elementary school principal, and she has an older sister with autism — after her parents’ divorce.

In high school, Rubin developed a serious interest in major league baseball and discovered a knack for facts and statistics. Other fans were impressed by her ability to recall the specific grips used by pitchers, or describe the preferred strategies of the 1970s Orioles manager Earl Weaver. In college in the late 2000s, she recognized a similar analytical impulse at the height of Potter-mania. Rubin spent hours researching theories on the online forums MuggleNet and The Leaky Cauldron. As a journalism major and an aspiring baseball writer, she felt she was already chasing one improbable dream; the idea that her love of pop culture would be central to her career was beyond her imagination.

Rubin’s twin passions first merged at the sports and pop culture website Grantland, which she joined as an editor in 2013. Bill Simmons, who hired Rubin at Grantland and later brought her to The Ringer when he started it in 2016, said he had been impressed by her work ethic and enthusiasm.

“When it came to the worlds that we wanted to cover, she was a 10 out of 10,” Simmons said. “She takes this stuff really seriously, which is something that I noticed and that I think the audience notices, too.”

Joanna Robinson, Rubin’s co-host on “Talk the Thrones” and “House of R,” said Rubin’s polyglot cultural fluency is a secret weapon in recording sessions. “You’ll be talking to her, and some perfectly relevant, massive quote from Harry Potter, or ‘Star Wars’ or ‘Lord of the Rings’ will just tumble out of her mouth, verbatim,” she said. “I’m like, ‘Do you have the entire series memorized? How is this possible?’’’

Rubin’s first experience in recap podcasting was covering “Lost” in 2010, during weekly segments of a college football podcast hosted by Stewart Mandel for Sports Illustrated. She was an admirer of the writer Jeff Jensen’s meticulous recap blogs for Entertainment Weekly and listened to “The Official Lost Podcast” — one of the first official recap podcasts — hosted by the showrunners Damon Lindelof and Carlton Cuse. Like many fans, Rubin came to view the experience of deconstructing the show with fellow obsessives as equally meaningful to sitting down for an hour in front of her television once a week.

“I basically had no room in my life for anyone who wanted to talk about anything other than ‘Lost,’” Rubin said.

Kristin Russo, a queer activist who was the co-creator, with the musician Jenny Owen Youngs, of the “Buffering the Vampire Slayer” podcast, about “Buffy the Vampire Slayer,” said shows with a cult following are “a magical vehicle for forging community.” “Buffering,” which recently ended after a six-year run, attracted around 180,000 listeners per month, many of whom also attended live “Buffering” events or contributed between $2 and $10 each month to the “Buffering” Patreon account.

“We had fans who met their spouses on the old “Buffy” message boards, or who grew up with the show and listened with their children, who were watching for the first time,” said Youngs. “It was like getting to be a part of a kind of family.” (Russo and Youngs are planning a new show about “The X-Files.”)

Since September, when “The Rings of Power” premiered, two weeks after the premiere of “House of the Dragon,” Rubin’s weeks have been divided roughly in half. She typically receives screeners for “Dragon” on Wednesdays, records “Talk the Thrones” on Fridays and tapes a “deep dive” into each episode for “House of R” on Tuesday mornings. Until last week, when “Rings of Power” ended its first season, she received “Rings of Power” screeners on Tuesday afternoons and podcasted about the show on Thursdays. Although she doesn’t officially work weekends, Rubin described Saturday as “an ideal prep day” for her recording sessions the following week.

“We’re a couple of Hermiones set loose on a TV show,” said Robinson.

Rubin said that she recognizes her favorites aren’t for everyone, and that not all heroes’ journeys are created equal. She has no expectation that every listener will find as much joy in fantasy fiction’s ever-expanding cultural footprint as she does. But if and when they do hit the play button — as the genre’s persistent popularity suggests they will — she and her colleagues will be ready and waiting.

“One thing I love about these stories is they’re always there to be discovered and rediscovered,” Rubin said, paraphrasing a quote from the first “Game of Thrones” novel. “The words are fixed, but perspectives change.”