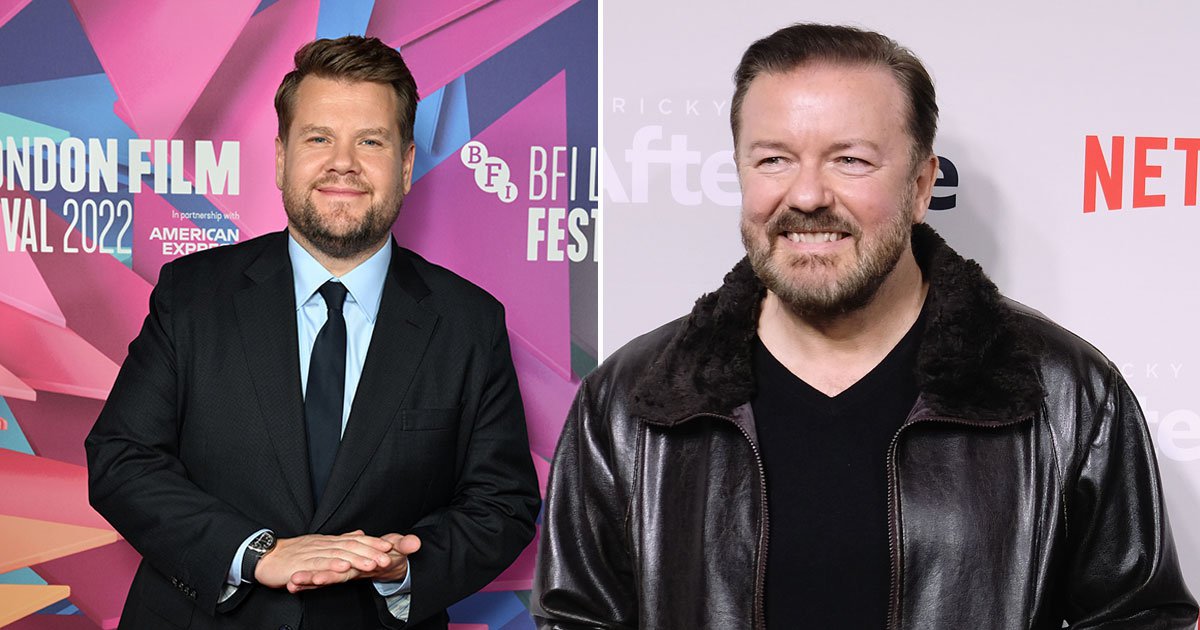 James Corden has been accused of stealing a routine from Ricky Gervais’ stand-up on The Late Late Show.

The After Life creator had pointed out the similarities of the Gavin and Stacey star’s gag in the opening monologue of the talk show and one of his own in a now deleted tweet.

In it, the presenter, who is married to TV producer Julia Carey, discusses Elon Musk taking over Twitter, after buying the social media platform in a $44billon (£38.3bn) deal.

James said: ‘That’s what I think when you see Elon Musk talk about Twitter, he says, ‘well it’s the town square’, but it isn’t.

‘Well that sign wasn’t for you, it was for somebody else, you don’t have to get mad about all of it.’

The Office created had captioned the now removed clip: ‘The bit about the town square advert for guitar lessons is brilliant’, in reference to his own joke, which is almost identical to the one Corden relayed earlier this week.

After a fan had asked Ricky if James had sought permission to use the gag, he replied: ‘No. I reckon one of the writers ‘came up with it’ for him. I doubt he would knowingly just copy such a famous stand up routine word for word like that.’

Ricky had also retweeted comments from another follower: ‘Plagiarism? I don’t know what people are talking about, these two jokes by @JKCorden and @rickygervais are barely similar.’

A social media account responded: ‘This is clearly ripped but in Cordens defense it’s highly unlikely he is watching a Gervais special with a pen and pad at hand. This is almost certainly one of his writers. I’d guess he was oblivious it was done by Gervais. They don’t like each other.

A follower tweeted: ‘So many people blaming Corden for this as if he writes his own jokes. He has a whole team of writers on that show. Obviously one of them ripped it off. Joke wasn’t even very funny.’

James was banned from the New York eaterie for allegedly being ‘nasty’ to waiting staff on more than one occasion, with the actor later apologising for his behaviour.

Retweeting a clip of his Netflix drama After Life,  Ricky’s character, Tony, reacts to one of his colleagues announcing JC would be a dream dinner guest of hers.

‘Number one, James Corden,’ she says, as Tony despairs.

‘We could do carpool karaoke,’ she says, with Tony, a local journalist,  renaming it ‘Carpool Kamikaze.’

‘That man can do anything!’ she then insists, with Ricky’s character adding quickly: ‘And does.’

Metro.co.uk has reached out to reps for James Corden and Ricky Gervais for comment.