At the 94th Academy Awards, Jessica Chastain won the award for Best Actress and gave a thought-provoking speech about legislation, discrimination and suicide.

A month after its original ceremony date of 27 February, the 2022 Academy Awards are finally here. The star-studded ceremony took place on Sunday 27 March at the Dolby Theatre in Los Angeles.

Making history with her first ever Oscar win was Jessica Chastain who picked up the Best Actress accolade for her performance in The Eyes Of Tammy Faye.

Her depiction of Tammy Faye, the wife of controversial televangelist Jim Bakker (played by Andrew Garfield) was an emotional one and the biopic not only touched on the pair’s troubled marriage, but also underlined Tammy Faye’s unwavering support for LGBTQ+ rights.

The moment may have been overshadowed by other events at the glitzy ceremony on Sunday evening – the physical on-stage altercation between King Richard’s Will Smith and Chris Rock prompted the Academy to remind everyone that they do not condone violence – but Chastain provided some lighter and more joyful relief in the form of her acceptance speech.

In her speech, she referenced the harder times of the past couple of years and said: “Right now, we are coming out of a lot of difficult times that have been filled with a lot of trauma and isolation.

“And so many people out there feel hopelessness and they feel alone. Suicide is a leading cause of death in the United States. It’s touched many families – it’s touched mine – and especially members of the LGBTQ community, who oftentimes feel out of place with their peers.” 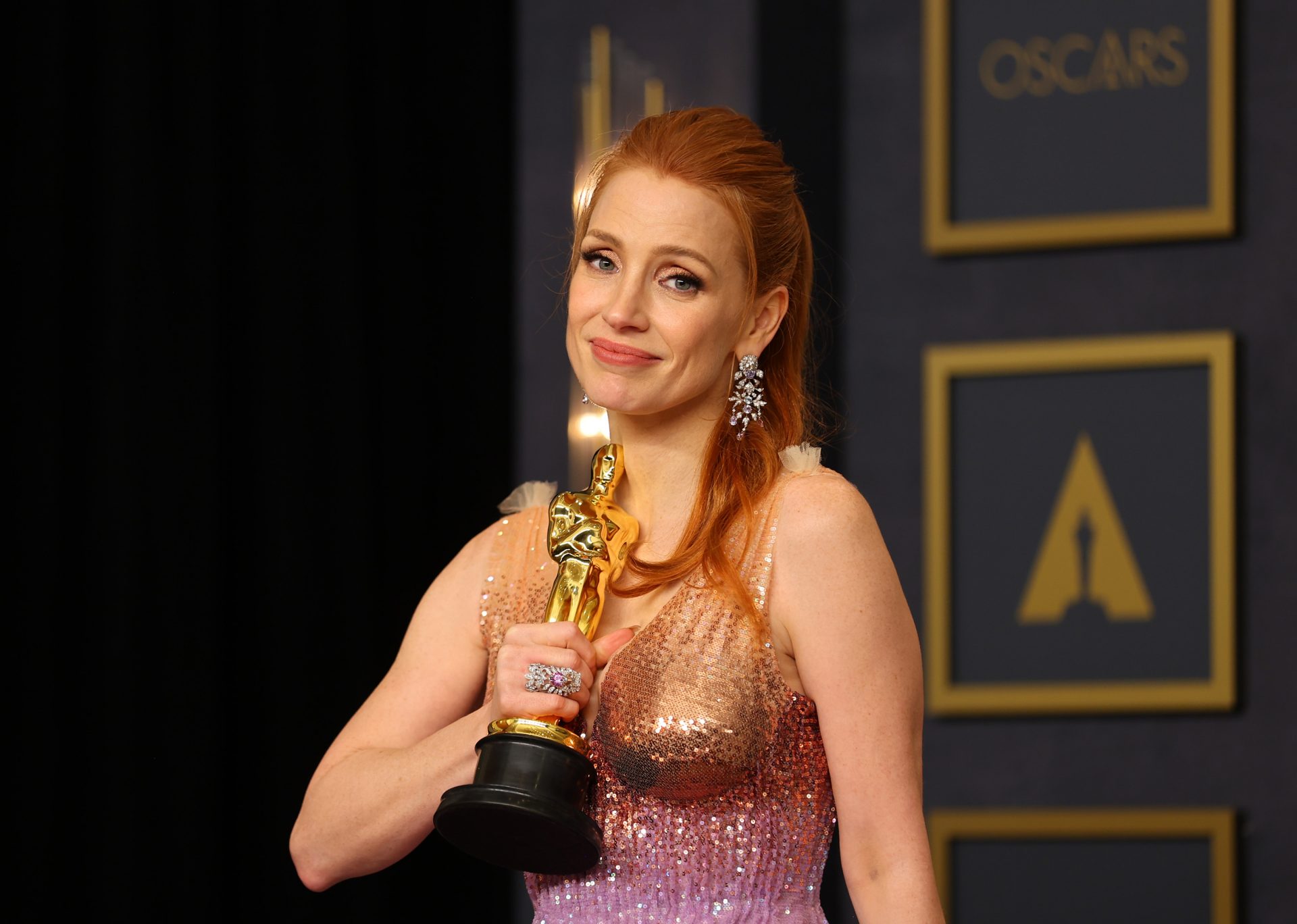 Chastain won the Best Actress Oscar for her performance in The Eyes Of Tammy Faye.

She took the time to reference Florida’s “don’t say gay” bill and anti-trans legislation in several states: “We’re faced with discriminatory and bigoted legislation, which is sweeping our country, with the only goal of further dividing us. There’s violence and hate crimes being perpetuated on innocent civilians all over the world.”

Chastain also took the time to reflect on the attitudes of her on-screen character: “In times like this, I think of Tammy and I’m inspired by her radical acts of love – we’ve talked about love a lot tonight.

“I’m inspired by her compassion and I see it as a guiding principle that leads us forward, and it connects us all in the desire that we want to be accepted for who we are, accepted for who we love and to live a life without the fear of violence or terror.”

Andrew Garfield and Jessica Chastain in The Eyes Of Tammy Faye.

Although Chastain has been nominated previously at the Academy Awards for Best Supporting Actress in The Help in 2012 and Best Actress in Zero Dark Thirty in 2013, this is her first Oscar. She wrapped up her thoughtful acceptance speech with a reminder to everyone:

“For any of you out there who do, in fact, feel hopeless or alone, I just want you to know that you are unconditionally loved for the uniqueness that is you.”

The Eyes Of Tammy Faye is available to stream on Disney+.