Jimmy Kimmel Reminisces About One Year of ‘Living Contagiously’

Welcome to Best of Late Night, a rundown of the previous night’s highlights that lets you sleep — and lets us get paid to watch comedy. We’re all stuck at home at the moment, so here are the 50 best movies on Netflix right now.

One Year Later, Gifts for Everyone

Jimmy Kimmel celebrated America’s “coronaversary” on Thursday night, referring to it as “one year of living contagiously.”

“The traditional gift for a one-year anniversary is paper, so I figured toilet paper makes the most sense,” he said, while tossing the most in-demand item from last March to a sparse, socially distanced audience made up of “Jimmy Kimmel Live” employees.

“I think we all remember where we were when we heard the news, because we’re all still there.” — STEPHEN COLBERT

“Well, it’s been exactly one year since we’ve had an audience, and I’ve got to say, I really miss the laughs, the energy, and of course, keeping the lost wallets.” — SETH MEYERS

“Yeah, it was a year ago today that we had our last show with a full audience. Six days later, I did the show from home, and six days after that, both my kids had agents.” — JIMMY FALLON

“I remember that day like it was yesterday. Everything was shutting down, people were scared, grocery stores were ransacked, so I got up on a chair in the office and gave an inspirational speech where I said to my staff, ‘Gang, I know you’re terrified, but this is our moment. People are counting on us. So let’s get out there and put on the best [expletive] show of our lives!’ And then I looked down and the room was empty except for a tumbleweed that rolled past, stole a bottle of Purell off my desk and then left.” — SETH MEYERS

The Punchiest Punchlines (The Way We Were Edition)

“And today marks one year since the World Health Organization declared Covid-19 a pandemic. Prior to that, it was actually categorized as a legume.” — STEPHEN COLBERT

“If somebody said ‘N95’ to you one year ago, you’d think they were a bingo caller.” — JIMMY KIMMEL

“Remember when we were carefully disassembling our Instacart deliveries like a munitions expert in ‘The Hurt Locker’? Watch out, the Chipotle could explode!” — JIMMY KIMMEL

“Of course, it’s also the one-year anniversary of the first time I Lysol-ed a banana. But not the last.” — STEPHEN COLBERT

“It’s also been one year since we all trapped ourselves inside our homes with stockpiles of gin and red wine, watching ‘Tiger King’ and ‘Love Is Blind’ while clinging to our last shreds of toilet paper like a plank floating in the water after a shipwreck.” — SETH MEYERS

“I think we all remember where we were when we heard the news, because we’re all still there.” — STEPHEN COLBERT

“Yeah, the past year was just like flying United Airlines. The engine fell off, but somehow we still made it.” — JIMMY FALLON

“If you had told me a year ago that nearly 100 million Americans would be vaccinated for Covid by March 2021, I would have said, ‘What are you talking about? They said this will be over in two weeks. All we’ve got to do is flatten the curve, that’s it. When the warm weather comes, it will just disappear.’” — JAMES CORDEN

The writer and chef Eddie Huang talked with Desus and Mero about his new movie, “Boogie,” and his feelings about recent racially driven attacks on Asian-Americans. 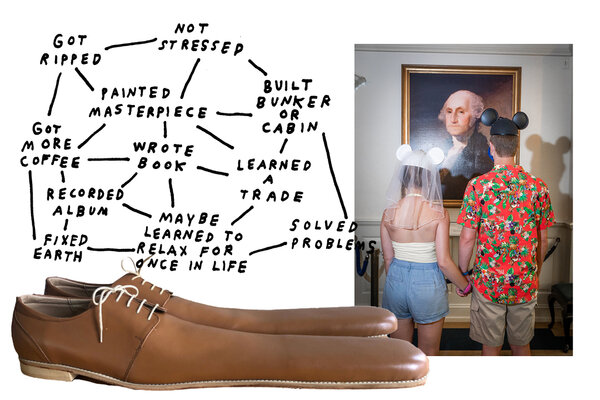