Johnny Clegg, Who Battled Apartheid With Music, Is Dead at 66

Johnny Clegg, a British-born South African singer, songwriter and guitarist whose fusion of Western and African influences found an international audience and stood as an emblem of resistance to the apartheid authorities in his adopted land, died on Tuesday in Johannesburg. He was 66.

His manager, Roddy Quin, announced the death. Mr. Clegg learned in 2015 that he had pancreatic cancer.

From his teenage years onward, Mr. Clegg ventured with ever greater boldness across racial lines. He spent time in the gritty, violence-prone hostels reserved for migrant black mineworkers that were formally off limits to most of his fellow white South Africans. His music crossed racial lines as well.

In the bands Juluka (“Sweat” in the isiZulu language) and Savuka (“We have risen”) and as a solo artist, Mr. Clegg became known for songs and performances that resonated through South Africa’s long struggle against racial separation.

“We have a mission,” he told The New York Times in 1990, “which is to bring a whole collection of songs that are about the South African experience to the world.”

“The warrior’s now a worker, and his war is underground,” Mr. Clegg sang. “With cordite in the darkness he milks the bleeding veins of gold.”

“Scatterlings of Africa,” reflecting the myriad dislocations of South African society, became a breakthrough commercial success in Britain and elsewhere in 1984, enabling Mr. Clegg to abandon an academic career in Johannesburg as an anthropologist and devote himself full time to his music.

The haunting lyrics of his 1987 song “Asimbonanga” (“We have not seen him”), about the imprisoned Nelson Mandela, were so evocative of the era that in 1999, Mandela, by then a free man, joined a surprised Mr. Clegg onstage at a concert in Frankfurt during a performance of the song.

The moment had a particular poignancy: When “Asimbonanga” was written, Mandela was incarcerated and all but invisible beyond the prison walls under apartheid laws that prevented his image and utterances from being published.

With his spectacular onstage enactment of high-kicking Zulu war dances and stick fighting, Mr. Clegg was often referred to as “the White Zulu.” It was a nickname he said he loathed, but it nonetheless reflected the racial contortions and obsessions of South Africa both before and after the elections in 1994, which brought Mandela to power as the country’s first black president after his release from prison in 1990. 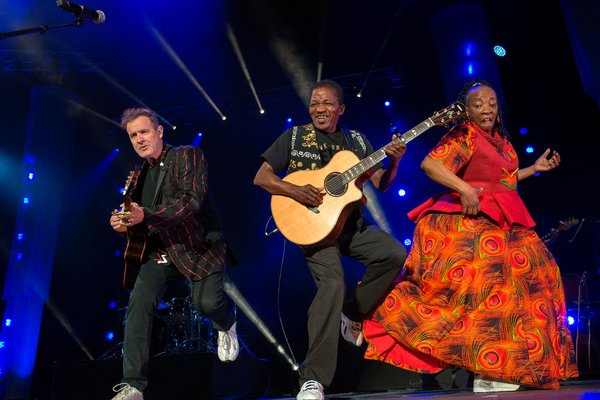 The South African government said in a statement on Tuesday that Mr. Clegg’s music “had the ability to unite people across the races,” and that he had “made an indelible mark in the music industry and the hearts of the people.”

Throughout the apartheid era, Mr. Clegg and his bands were harassed by the authorities and occasionally detained. Their performances were often disrupted, wherever they were held. Under apartheid legislation known as the Group Areas Act, white people were not permitted to enter segregated black townships without official permits, which were often withheld, while black people were kept out of whites-only areas by nighttime curfews and a web of zoning restrictions.

Other apartheid proscriptions kept Mr. Clegg’s music off state-run radio shows. (He said he was first arrested at the age of 15.)

At the same time, he was censured by the Musicians’ Union of Britain precisely because he performed in South Africa, in contravention of an embargo that was supposed to reinforce the isolation of the apartheid regime.

Despite that sanction, Mr. Clegg toured widely, securing an international following. He was particularly popular in France, where he was made a Chevalier of Arts and Letters in 1991. Britain named him an officer of the Order of the British Empire in 2015. In South Africa, he received the country’s highest civilian medal, the presidential Ikhamanga Award, in 2012.

Mr. Clegg received his cancer diagnosis in 2015. Two years later, when the disease was said to be in remission after chemotherapy, he embarked on what was labeled the Final Journey Tour, taking him to Britain, the United States, Canada, South Africa and elsewhere.

“Johnny Clegg is not exactly a household name in Britain,” the British newspaper The Guardian reported after he performed in London. “But back home in South Africa he has the status of a national treasure, and it seems that every (predominantly white) South African in town has turned out to see him.”

Jonathan Paul Clegg was born on June 7, 1953, in Bacup, a onetime cotton milling town in northwest England. His parents separated when he was an infant, and he did not meet his father, Dennis, until he was 21 years old, according to biographical notes in “Learning Zulu: A Secret History of Language in South Africa,” a 2016 study by Mark Sanders, a professor of comparative literature at New York University.

Mr. Clegg’s mother, Muriel, a jazz singer from a Lithuanian Jewish family, moved back from Britain to her native Rhodesia, as Zimbabwe was known before independence in 1980. She later married a South African journalist, Dan Pienaar.

The couple broke up when Mr. Clegg was 12. But before they did, Mr. Pienaar introduced his stepson to life in segregated black townships, which were rarely if ever visited by white people.

Mr. Clegg lived briefly in Israel and Zambia, where he attended multiracial schools at a time when education in South Africa was strictly segregated. In South Africa, “I felt like a migrant,” he said in an interview with the South African newspaper The Mail & Guardian in 2010. “So when I met migrant workers — Zulu migrant workers — there was something about them that I intuitively connected with, because they were also establishing these tenuous connections with different places.”

Despite the expectations of his mother’s family that he would be raised according to Jewish traditions, he declined to have a bar mitzvah and described himself as a “secular Jew.”

Survivors include his wife, Jenny, and two sons, Jesse and Jaron. Jesse Clegg has a successful career of his own as a singer and songwriter.

Mr. Clegg’s musical journey began when he was an adolescent and met Charlie Mzila, a Zulu migrant who cleaned apartments by day and played guitar by night. From him, Mr. Clegg often said, he learned a new kind of guitar playing, with the instrument tuned and strung differently than in the West.

He formed the band Juluka after meeting Sipho Mchunu, a Zulu migrant worker at the time. That band, which blended traditional Zulu music with influences as diverse as Celtic folk groups like the Chieftains and American singer-songwriters like Jackson Browne, achieved international renown before it disbanded in 1985 and Mr. Mchunu returned to his farm in Zululand. It reunited briefly in the mid-1990s.

Mr. Clegg’s second band, the more rock-oriented Savuka, was formed in 1986 and was nominated for a Grammy in the world music category for its 1993 album, “Heat and Dust.” But the band was dissolved that year, soon after Dudu Ndlovu, Mr. Clegg’s drummer and onstage dance partner, was shot to death, apparently while trying to mediate in a conflict between rival cabdrivers.

Mr. Clegg dedicated a song, “Osiyeza” (“We are coming”), to Mr. Ndlovu. “It’s only you that remains with me,” the lyrics said in part. “Clear as the light of day.”