Joshua Jackson is head over heels for his wife Jodie Turner-Smith and not afraid to gush about her on national TV. On The Tonight Show Starring Jimmy Fallon Monday night, Jackson recounted the story of when he knew she was the love of his life, and the sincere way he talks about her and their engagement made us swoon for his incredible certainty. 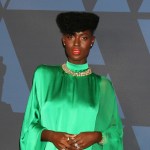 
Jodie Turner-Smith Shows Off Her Figure in Sultry Lingerie Photos

“I knew the moment she asked me,” Jackson replied when Fallon asked when he knew Turner-Smith was the one, revealing that it was his wife who did the proposing.

“She asked me on New Year’s Eve,” Jackson explained. “We were in Nicaragua. It was very beautiful, incredibly romantic, we were walking down the beach and she asked me to marry her.”

“I did not know [she would propose], but she was quite adamant and she was right,” Jackson continued, admiring his wedding ring. “This is the best choice I ever made.”

Ladies, this is what a man in love looks like!

The pair first sparked marriage rumors in November 2019 when they appeared on their first red carpet together with Jackson wearing a wedding ring.

The couple are now parents to Janie, 1, and Turner-Smith told British Vogue that not only was Jackson right there by her side during the seemingly endless labor; he was her rock throughout pregnancy and early parenthood, too.

“Both of us had watched our own mothers struggle to raise children without such support,” she explained to Vogue. “Both of us were determined to create something different for ourselves. He kept saying to me, ‘There’s no part of this that I’m going to miss.’ And there wasn’t.”

Literally in a puddle of swoon over here. What a great man! We can see why Turner-Smith was determined to lock him down.

Before you go, click here to see the longest celebrity marriages.