When Keeping Up With the Kardashians first aired 20 seasons ago, the reality royals were seemingly known for one thing — and it wasn’t a beauty empire. Yes, long before Kylie lip kits, KKW beauty, Poosh, or Kravis, there was just one mainstream association: Kim Kardashian’s sex tape. 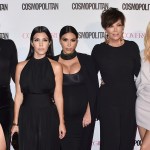 And over the years, Kardashian critics haven’t let them forget it, proclaiming that said tape is the sole reason for the show’s success. However, as revealed in a recent interview with the L.A. Times, the executive production team behind the series begs to differ.

Lisa Berger, who served as executive vice president of original programming and series development at E! when KUWTK was conceptualized, insists the sex tape had nothing to do with the network pursuing the series. “I think everyone’s like, ‘The sex tape made the show happen.’ It was so not about that at all,” Berger told the paper.

KUWTK executive producer Farnaz Farjam concurred, implying the media frenzy was actually something they were willing to work with, as opposed to an explicit asset. “I remember Kim being conflicted about it, because she hated everything that was going on around that tape,” he said. “We all talked about, ‘We just have to own all the controversy around this family’ and jumped in with both feet in the first episode. Then, the audience can get to know them at a much deeper level than what’s been tabloid headlines.”

This is partly what influenced Kim to publicly acknowledge the scandal at all, which she did in the very first episode — by her own volition.

“I do think that, obviously, as producers, I’m sure they loved it,” Kim told the LA Times. “And loved [us] wanting to talk about the elephant in the room. And I probably wouldn’t have, unless it was for the show. Sometimes I feel like, ‘OK, I know I should probably deal and get this over with. Someone’s gonna ask me, so I might as well just go ahead and do it.”

The reality star added that filming the series actually helped the family deal openly with issues — and she was on board. “At the end of the day, I was always open and honest and wanted to share whatever I was going through,” Kim said. “I wasn’t gonna hold back.”

We’re so glad she didn’t!

Before you go, click here to see the best reality TV shows on right now.