“I feel that for the first time, I have met the South,” the poet Langston Hughes wrote in the winter of 1932, at the end of a monthslong, multistate reading tour designed to cultivate black audiences.

To that end, Hughes had also created a small poetry collection called “‘The Negro Mother’ and Other Dramatic Recitations.” The six poems within sketch incisive portraits of black life in the Jim Crow era. Hughes wrote the poems to be spoken rather than read — performed, with music, in the schools, churches and halls of black America.

The composer Michael Schachter and the bass-baritone Davóne Tines have adapted the most striking of the poems, “The Black Clown,” into a music-theater piece that will have its New York premiere at the Mostly Mozart Festival on Wednesday. Mixing jazz, oratorio, Broadway, gospel and other musical traditions, the show traces its clown protagonist’s journey through the terror of slavery and the shackled freedom of Jim Crow toward a self-proclaimed humanity.

“The Black Clown,” Mr. Tines said in a recent interview, “is our most earnest attempt to realize Hughes’s project for making the larger humanity understand a single person, and thus understand itself.”

In their adaptation, Mr. Schachter and Mr. Tines adhere faithfully to the unusual text, which Hughes described as a “dramatic monologue.” The poem is a theatrical miniature, divided in print into two columns.

On the right, which Hughes labels “The Poem,” is the rhyming main text. On the left, “The Mood” offers terse commentary and performance indications, a kind of score in words. These range from the general — “gay and low-down blues” and “melancholy jazz” should be played at certain points, Hughes suggests — to the specific: He mentions lines from the spirituals “Nobody Knows the Trouble I’ve Seen” and “Motherless Child.”

The poem is impassioned, incantatory and concentrated: “God! Give me the spotted / Garments of a clown / So that the pain and the shame / Will not pull me down.” 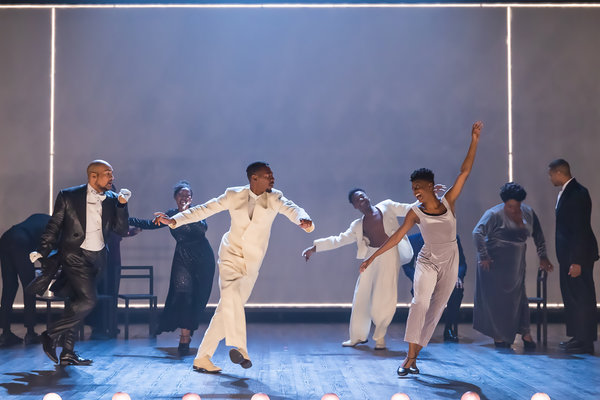 “In just two pages and a few short stanzas,” Mr. Schachter said in an interview, “the poem encapsulates very complex ideas about clowning; about using masks in performance to survive in a hostile social environment; about the history of race and African-American history in America; about the mechanisms of resistance and claiming one’s humanity in the face of oppression.”

Featuring a vocal ensemble of 13 and a Cab Calloway-style dance orchestra, the 70-minute show deftly evokes the brassy vitality of a 1920s speakeasy, the relentless rhythms of the cotton fields and the congregational fervor of a Southern Baptist religious service.

Mr. Tines and Mr. Schachter’s collaboration developed out of their friendship and shared interest in Hughes’s poetry. In 2010, Mr. Schachter suggested tackling “The Black Clown,” composing a sensitive setting of Hughes’s poem “Heart,” in 2011, as a sort of trial run.

“It hit me over the head,” Mr. Tines said of “The Black Clown.” “The poem put in very clear and concise terms things that I wanted to express about myself and the larger African-American experience that weren’t even apparent to myself until reading the poem.”

What began as a “Dichterliebe”-style song cycle for baritone and piano eventually transformed — under the auspices of the American Repertory Theater in Cambridge, Mass., where it premiered last year — into an evening-length ensemble piece directed by Zack Winokur. This expansion came from a growing realization, Mr. Tines said, “that this actually wasn’t the voice of one person.”

“It was,” he added, “a collective speaking to America.”

The writing of “The Black Clown” coincided with Hughes’s growing attraction to leftist politics in the early 1930s, as the Great Depression ravaged black communities economically and the Scottsboro Nine trial thrust racial injustice into the national spotlight. But the poem lacks the confrontational bite of the ones he wrote shortly after, such as his racially charged “Christ in Alabama,” his anti-imperialist “Merry Christmas” or his anticapitalist “Advertisement for the Waldorf-Astoria.”

Instead, the inspirational poems that accompanied “The Black Clown” were aimed at, Hughes wrote, “the hearts of the people,” rather than the intelligentsia. He partnered with the illustrator Prentiss Taylor to form the short-lived Golden Stair Press and publish “The Negro Mother.”

On tour, this pamphlet was a hit. The 25-cent copies, Hughes joked, “sold like reefers on 131st Street.”

Despite its popularity at the time, the poems of “The Negro Mother” have been largely overlooked by composers in favor of the blues-inflected contents of the collections “The Weary Blues” and “The Dream Keeper.” Of the more than 250 published songs that have used his poems, by composers including Margaret Bonds, William Grant Still, Elie Siegmeister and Ricky Ian Gordon, few if any come from “The Negro Mother.”

Even so, “The Black Clown” has a strong connection to better-known Hughes poems like “A Black Pierrot” and “Heart.” The character of the clown recurs throughout his early work — a means of exploring race and sexuality, as well as vaudevillian blackface. In many instances (though not “The Black Clown”), Hughes directly refers to Pierrot, the naïve, sensitive commedia dell’arte clown who inspired Picasso, Schoenberg, T.S. Eliot and other modernists of the early 20th century.

For Hughes, the figure of the clown was a theatrical analogue to jazz, which he called “the tom-tom of joy and laughter, and pain swallowed in a smile.” Pierrot, Mr. Tines said, is “a plastic figure that many people can find themselves mirrored within.”

Contemporary audiences may also see in the clown a reflection of “code-switching,” the practice of altering one’s speech and behavior to fit different social situations.

“We’re getting at this complex dynamic where people in African-American cultures are forced to perform and put on multiple consciousnesses,” Mr. Schachter said. “There’s an element to the show where no matter how we try to escape it, the audiences at Lincoln Center and elsewhere probably are going to be predominantly affluent and white, looking at black Broadway performers entertaining onstage.”

This presents a challenge, he added: “How can we do that in a way that does honor to the history and intensity of the poem’s message without also being admonishing?”

That message — a celebration of common humanity coupled with an unflinching look at humanity’s collective failings — remains timely in an era of resurgent ethnic nationalism and metastasizing income inequality.

With “The Black Clown,” Mr. Tines said, “Hughes was tapping into and providing a blueprint for how social justice has happened in the past, how it needed to happen in his time, and how it needs to happen today.”