Late Night Celebrates the Final 36 Hours of Trump in Charge

Welcome to Best of Late Night, a rundown of the previous night’s highlights that lets you sleep — and lets us get paid to watch comedy. We’re all stuck at home at the moment, so here are the 50 best movies on Netflix right now.

Late night celebrated Martin Luther King’s Birthday at the top of their shows by holding up the civil rights activist as an example of a great leader, as opposed to the departing president.

“First of all, before anything else, Happy Martin Luther King Day, everybody, when we celebrate a great leader who led a march on Washington that didn’t end with me having to learn about someone named Q Shaman.” — STEPHEN COLBERT

“If Dr. King were alive today, he would probably watch the news and go, ‘Let me be more specific about this dream I had.’” — JIMMY KIMMEL

“You know, it’s days like today we should all be grateful that Trump can’t tweet.” — JIMMY FALLON

“Today was Martin Luther King Jr. Day, and I’d like to think he’d have a good laugh if he knew the F.B.I. had to spend this federal holiday tracking down and arresting thousands of white supremacists. He did have a second dream, and that was it.” — SETH MEYERS

Most of the rest of their monologues were focused on President Trump’s last few days in office.

“Well guys, there’s only 36 hours left in Trump’s presidency. You think you’re excited? Every 10 minutes the White House staffer yells how much time is left like it’s ‘The Great British Bake Off.’” — JIMMY FALLON

“Yep, just 36 hours left. You can tell time is running out because Trump is now signing pardons with both hands.” — JIMMY FALLON

“Forty-eight hours from now Donald and Malaria, Melania — whoops — will be back home, asleep in separate bedrooms at Mar-a-Lago.” — JIMMY KIMMEL

“President Trump is reportedly planning on leaving the White House on Wednesday morning for Florida. So he’s not changing his routine at all.” — SETH MEYERS

“Trump’s leaving office with his lowest approval rating yet — it’s down to 29 percent. Which, for someone who incited a violent insurrection to overthrow the government isn’t bad. I mean, honestly, what would he have to do to get below 20 percent — eat the Constitution?” — JIMMY KIMMEL

“Trump has the lowest average approval rating of any president in the modern era. The only one to leave office with a lower rating than that was Kevin Spacey.” — JIMMY KIMMEL

“Sources say that tomorrow, on his last full day in office, the president is prepared to issue around 100 pardons and commutations. Why so many? Well, there’s reportedly a lucrative market for pardons. Finally, POTUS is running a business that makes money.” — STEPHEN COLBERT

“President Trump tomorrow is reportedly planning to issue at least 100 pardons and commutations. He said he wanted to give so many so that it would be even more hilarious when Giuliani doesn’t get one.” — SETH MEYERS

“You can actually bet on who Trump will pardon, for real. And you know who the odds-on favorite is celebrity-wise? Lil Wayne, Trump’s buddy. They bonded over a mutual love of hip-hop and cough syrup.” — JIMMY KIMMEL

“During his last hours in office, Trump is planning to issue pardons, but it’s reported it’s not going to be a pardon to himself or his family members. Trump is the only president in history who decides not to pardon himself and you immediately think, ‘What’s he up to?’” — JIMMY FALLON

“I’m not surprised Trump didn’t pardon himself today because then he would be liable for whatever he does tomorrow.” — JIMMY FALLON

“Yep, Trump won’t pardon his family either. Actually it’s kind of sweet — Trump told his kids, ‘When I go down for tax fraud, I want you all to be in prison with me.’” — JIMMY FALLON

What We’re Excited About on Tuesday Night

The actress Aubrey Plaza will pop by “Conan” on Tuesday. 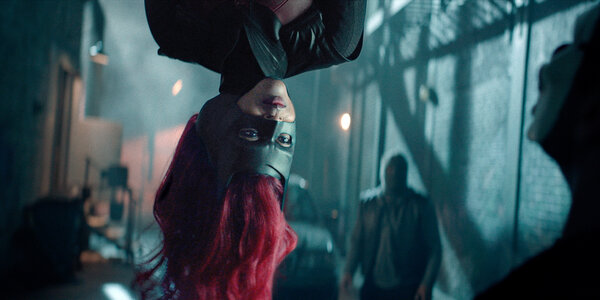 Javicia Leslie is the first-ever Black live-action Batwoman as the titular character on the second season of the CW series.