The photographer who spent months witnessing mysterious paranormal events and even captured a picture of a levitating girl has revealed what it was really like living with The Enfield Poltergeist.

The petrifying story is set to be explored in a new series following some of the world’s biggest unsolved paranormal activities, Hauntings.

For the uninitiated, The Enfield Poltergeist (one of the real life mysteries which inspired The Conjuring) has never yet been explained, although witnesses have claimed they actually saw the teenager involved possessed, saw furntiture moving without explanation, and one incident was even caught on camera by Graham Morris.

In September 1977, police were called to a house in Enfield, North London, to investigate a reported home invasion, in which loud knocking on the wall had been heard and furniture had moved.

Not long later, the terrified family and a neighbour rung The Daily Mirror, where Morris worked as a photographer, and while at first it was believed to be a hoax, once reporters realised police were involved, things changed.

In an exclusive interview with Metro.co.uk, Morris shared his experience of what it was like in the house with all the paranormal activity. 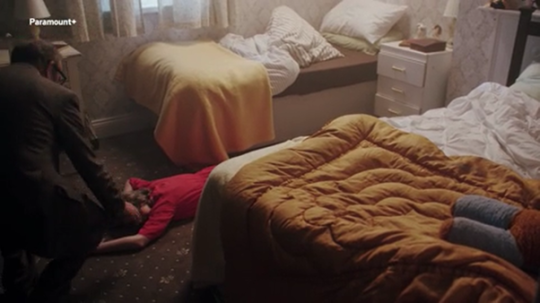 He continued: ‘I went in, I saw things happen and it convinced me there was something happening in the house. So I stayed on I was there for months after that.’

When asked what it was that convinced him, Morris went on to explain an eery incident.

‘I got struck on the head with a Lego brick that was flying through the air and I knew that no one was throwing anything because I could see everybody in the room.

‘I could see everyone in front of me and no one was throwing anything. So I was convinced that something was happened, and then I stayed on night after night and all sorts of things happen.

‘Chairs moved, cupboards opened, drawers opened, beds turned, over all sorts of things. So it convinced me there was something happening.’

‘First of all you went along thinking, well, it’s the kids, you know, there’ll be throwing things around trying to get a bit of attention. But I was convinced that they weren’t doing it by all sorts of reasons.

‘One was the fact that I didn’t see anybody throwing anything, and I was watching them at the time and the other was I could see the look on their faces, and they were horrified, so frightened, by what was going on. They wouldn’t have done that. They certainly didn’t.’

Once the Society for Psychical Research became involved, Morris took to trying to capture a picture of Janet being flung from her bed.

‘It got to the point where things are happening. We realised that Janet was the sort of epicentre of everything that happened in the house, it would happen around her and we just sat there night after night after night just waiting for things to happen.’

Morris explained that he set up a microphone and camera in Janet’s room, to try and photograph the mysterious things that were going on, which included Janet ‘being thrown out of the bed and ending up on the floor.’

And what he captured seemed to show exactly that. While he may not have been convinced Janet was levitating, as in the picture it looked like she was jumping out of bed, when he handed the image over to the Society, they described it as ‘levitation’.

Morris added: ‘You couldn’t second guess anything that was happening in that house,’ and to this day has no explanation behind the mystery, though denies believing in a ghost.

‘When I started at the house, it was very spooky and very frightening what was happening, but after a while, I learned or I’d convinced myself that it wasn’t anything to do with sort of ghosts or anything like that, it was something purely scientific that we just didn’t know what was happening, one day we’ll find out.

Hauntings is available to watch on Paramount+.