‘Mary Stuart’ Review: A Battle Royal in a Brooklyn Apartment

Two queens, a gaggle of self-serving politicians, a murder plot, a rivalry for regal dominance: George R.R. Martin has nothing on the annals of English history. That’s why the stories appeal to so many, from the writer and historian Philippa Gregory to the 18th-century German poet-playwright Friedrich Schiller, whose verse play “Mary Stuart,” about the imprisonment and final days of the famous Queen of Scots, has proved a steady stage draw, especially for zealous actresses.

Sixteenth century England comes to 21st-century America in Bedlam’s new adaptation of Schiller’s play, a fleet though unkempt production performed by a trim cast of four and filmed inside a Brooklyn fourth-floor walk-up.

Perhaps you already know the story from European history class, or one of the many fictionalized accounts of the tale. (I have Saoirse Ronan and Margot Robbie to thank for my most recent refresher, in 2018’s “Mary Queen of Scots.”)

Mary Stuart (Violeta Picayo), who is accused of murdering her husband, is imprisoned in England for also claiming a right to the throne. Her cousin, Queen Elizabeth (Shirine Babb), is conflicted about how to handle Mary, who poses a threat to her power while she’s alive, but whose execution would weigh on her conscience.

Then there’s the sway of public opinion and the perspectives of her various advisers to take into account — as they say, “uneasy lies the head that wears a crown.”

This “Mary Stuart,” adapted by Rachel Vail from the translation by Joseph Mellish, works a bold contrast between the aureate language and the home-cooked D.I.Y. vibe of the production, which has the same playful quality the scrappy and always inventive Bedlam is known for — albeit with a touch less polish.

Mary is held captive beneath a kitchen island; a suicide happens behind a shower curtain in a bathtub; a queenly meeting takes place not in a forest, as we’re told, but on a rooftop overlooking the city.

Such jarring contradictions occasionally feel compelling, but often read as kitschy, even amateurish. A French ambassador, for example, appears in the form of a blue sock puppet: Adorable, but — Mon Dieu! — dangerously close to something you’d find in a high school homework assignment.

That also goes for the camerawork, which is as shaky and abrupt as a scene from “Cloverfield.” The sound, too, cuts in and out, leaving some of the dialogue behind.

The four actors give generous performances, directed by Zachary Elkind with a snappiness that allows for each to contain multitudes: speedy, minute costume changes (a scarf, a pair of glasses, a blazer, a baseball cap) create the illusion of a whole English court without even the briefest interruption of a scene.

However, Elkind’s direction also sits unsteadily between cartoony humor and stately drama. So Simon Schaitkin’s Lord Burleigh, a sniveling, slouching schemer with glasses perched at the tip of his nose, is too arch, and Shaun Taylor-Corbett’s Wilhelm Davison, the queen’s secretary, too dopey. And yet Taylor-Corbett’s selfish Earl of Leicester, caught between his love for each queen and his desire to save his own neck, lands with more punch. 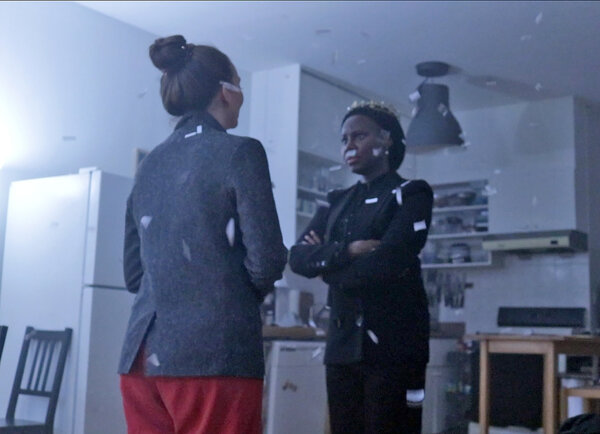 The same for Picayo and Babb, whose contrasting stances — both headstrong and self-righteous in separate ways — bring fire. Babb makes a believable Elizabeth, firm and royally composed yet vulnerable beneath the surface, while Picayo embodies defiance, as when she hurls a throaty “I am your queen!” at her rival.

“Before these strangers’ eyes, dishonor not yourself and me. Profane not, disgrace not the royal blood of Tudor. In my veins it flows as sure a stream as in your own,” Stuart declares to Elizabeth when they meet — a meeting that, in reality, never happened, by the way. And yet historical fiction loves to imagine it, understandably, because what could be juicier than a showdown between two powerful women?

Still most versions of this story struggle to figure out how to handle these women. Often their personalities, strengths and fears become occluded by the machinations of the men around them, as happens occasionally here.

Ultimately, despite the audacious contrasts that define this production, “Mary Stuart” also suffers from a case of “So what?” And by that I mean, “Why now?”

One impulse seems to be the chance to talk about female power, or power in general. I could imagine a critique of our election fracas and all the recent chatter about the expectations placed on the royals of Buckingham Palace today.

Mary Stuart
Through May 9; available on-demand at bedlam.org starting May 10.