While they may have taken a step back from their duties as senior royals, Meghan Markle and Prince Harry are paving the way for their own empire — and it’s taken them to Netflix. The streaming platform announced yesterday that Meghan, Duchess of Sussex, will be executive producing an enchanting new animated series coming to Netflix, and it sounds perfect for women and girls alike to find their spark. The series, with the working title Pearl, will follow the adventures of a 12-year-old girl as she’s inspired by a number of influential women who left their mark on history. 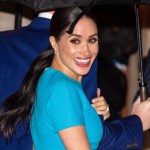 “Like many girls her age, our heroine Pearl is on a journey of self-discovery as she tries to overcome life’s daily challenges,” the Duchess of Sussex shared in a statement. “I’m thrilled that Archewell Productions, partnered with the powerhouse platform of Netflix, and these incredible producers, will together bring you this new animated series, which celebrates extraordinary women throughout history. David Furnish and I have been eager to bring this special series to light, and I am delighted we are able to announce it today.”

Meghan is working with a slew of industry veterans to make this show come to life. Furnish has worked on films such as Rocketman and the family-friendly animated movie Gnomeo & Juliet. The team also includes Carolyn Soper of Sherlock Gnomes and Tangled, Emmy-winning filmmakers Liz Garbus and Dan Cogan, and Amanda Rynda, who will serve as showrunner.

Pearl is the very first animated series from Meghan and Prince Harry’s production company, Archewell Productions. The company has already announced its inaugural project with the streaming giant — a docu-series entitled Heart of Invictus, which chronicles stories of participants in the Invictus Games.

Prince Harry and Meghan’s new ventures appear to be steadily moving along. Meghan has already debuted her first children’s book, The Bench, and the couple already have a working deal with Spotify via Archewell Audio, as well! It looks like they are working toward building their entertainment empire one new, inspiring and thoughtful project at a time.

Before you go, click here to see the best Netflix shows you should be watching right now.