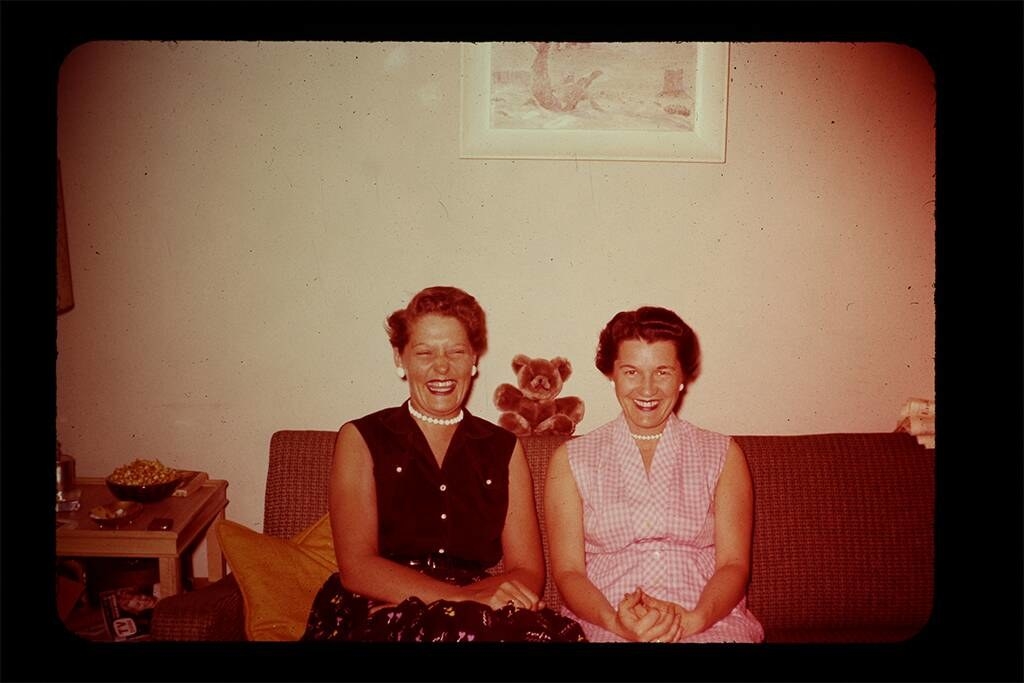 We at BuzzFeed News are proud to bring you a range of stories, from the serious to the lighthearted. To help keep it all free, become a member and sign up for our newsletter, Outbreak Today.

I’m a sucker for pretty much any movie that will force me to have a good cry, and when I first saw the trailer for Netflix’s new documentary A Secret Love, about a lesbian couple who’s kept their relationship private from their family for nearly 70 years, I knew it would do the trick. Since dropping on the streaming platform last week, director Chris Bolan’s tender portrait of his great-aunt, Terry Donahue, and her relationship with her partner, Pat Henschel, has become a critical hit and social media sensation.

I was indeed moved to tears at many points throughout the taut hour-and-20-minute film. But after I’d seen A Secret Love hailed as an “exquisitely crafted” love story that “may be the ideal antidote to your least-favorite queer tropes,” I wasn’t expecting that my swoony reaction to Pat and Terry’s incredible devotion to each other would be intermingled with anger and frustration on their behalf — not only because of the anti-gay bigotry they’ve faced throughout their lives, but because of the subtle but insidious homophobia baked into this very telling of their story.

Pat and Terry met in 1947, at a hockey rink in Saskatchewan, in Canada, where Terry played for the Moose Jaw Wildcats. It was her off-season; otherwise she’d have been traveling with the Peoria Redwings in the All-American Girls Professional Baseball League, now famous for having inspired A League of Their Own. When Terry moved to Chicago in the late ’40s to play for a team there, Pat followed, young and in love. The couple lived in the city together for decades, where they developed a close-knit chosen family of other gay people, before moving to the suburbs in 1994. Terry’s biological family back home in Canada thought they were simply cohabitating to save on rent money, until they opened up about the true nature of their relationship in 2009.

While plenty of A Secret Love is devoted to documenting Pat and Terry’s courtship with archival home videos and newsreels about the All-American Girls League — which is when the film is at its best — the present-day narrative follows the couple’s fraught conversations with Terry’s family about whether they should relocate to a retirement facility. Terry’s a few years older than Pat, and it’s clear her worsening health problems will soon require the kind of professional care that even the loving and dedicated Pat can’t provide alone.

Though it’s being promoted as a love story, the movie’s themes are more complicated (and potentially a lot more interesting): the dramas of aging, navigating elder care as LGBTQ people, and dealing with well-meaning but obstinate in-laws later in life make for thought-provoking and heart-rending material. Perhaps because Dolan is so close to his subjects, however, A Secret Love feels a little more like a story about how his gay aunts’ sexuality affected his family than a story about Pat and Terry in their own right.

When Terry and Pat come out, Terry’s nieces and nephews assure them that they “don’t care,” and that “Auntie Terry” is as beloved as ever. She’s clearly adored by her family, and in particular by her niece Diana — the director’s mother — who credits Terry as her saving grace during a turbulent childhood. Diana’s father, Terry’s brother, was an alcoholic and a bigot who once told Diana that Terry just needed to be “fucked by a big black guy to set her straight.” Naturally, when Diana asked her aunt if what her father said about her being gay is true, Terry denied it. She continued to do so for years, and Diana and her siblings never questioned her further.

Though the family is depicted as mostly supportive, the film never interrogates why Pat and Terry were hesitant to live their full truth around their family. We’re given some clues, however: One niece, Tammy, who knows her grandmother wouldn’t have approved of the relationship, suggests that Pat and Terry better get married so they’re no longer “living in sin.” And multiple family members clearly hold a grudge against Pat for keeping “Auntie Terry” apart from them in the United States. Diana, who’s very protective of Terry, thinks that even though Pat has “been good to” her, it’s not genuine love or affection. “Pat stole her away,” Tammy insists.

“Everybody loves Terry,” Pat says. “They put up with me because of Terry.”

Pat and her niece Diana have since told reporters that their relationship has improved dramatically since the events depicted in the film, and that they love and support each other. Which is wonderful if so! But it’s still hard to imagine that Pat, in both the filmmaking process and while doing press, would be entirely candid about her relationship with the family who’s responsible for telling her story. We get a little more insight from Terry, who says she was afraid that Diana and her other family members would disown her if she came out to them, something Diana and the others brush off as ridiculous after the fact.

But we aren’t afforded any insights into why Terry’s fears might have been warranted — nor, even more confoundingly, any of the reasons why Terry and Pat finally decided to tell them after all this time. Presumably, not knowing how much longer they’d be alive was a factor, and they’d prefer to die without secrets or regrets. But I wanted to see so much more of Pat and Terry’s decision-making processes and identity formation over the years. The world in 2009 looked very different than it did when these two first fell in love in 1947. What did they think about major gay milestones in popular culture, like Ellen’s infamous coming-out, or Pride parades, or the steady trickle of gay marriage legalizations across the country? How has their lesbianism affected how they interacted with and viewed the world?

Ultimately, the movie implies that the couple’s lives were defined by the closet. To be sure, they were forced to be discreet, especially earlier on in their relationship. (In one beautiful scene, while Pat and Terry are packing up the house for their upcoming move, the couple uncovers a love poem Pat wrote for Terry — with her signature torn off from the bottom, so that no one would discover its source.) But being “out” isn’t a static identity or position for gay people; it’s contexual, a series of everyday negotations. Pat and Terry had an entire community of dear friends in Chicago, to whom they were very much out and living life fully as themselves. “Friends are everything, really,” Pat says. “Closer than family.” (The members of Pat’s biological family are all either dead or distanced from her, though her story isn’t as clear.) The movie does show us some photos of the parties Pat and Terry threw throughout the years, and they have one present-day dinner with friends— two gay men — during which Pat wishes wistfully she could take them with her wherever they end up retiring. But the movie ultimately fails to provide us with any sense of Pat and Terry’s participation in, and reliance upon, queer culture and found family.

When Diana’s helping her aunts move, she flips through photo albums, marveling at the fact that Pat and Terry had a whole other life apart from them. Rather than celebrating the ways in which her beloved Auntie Terry found joy and communion throughout the decades — she wasn’t isolated in closeted despair, thank god! — Diana and other members of her family seemingly resent Pat for orchestrating this alternative lifestyle. They never say so outright, but the insinuations are clear enough: Without Pat, perhaps Terry never would have left home. Without Pat, perhaps Terry never would have been gay at all.

Ultimately, Pat and Terry move into an assisted living facility in Alberta. Pat was the one really dragging her feet on the move — she’d rather stay close to home in Chicago, if it weren’t so expensive, or else try warm, sunny Florida — but graciously, for her wife, she braves the cold, wintry north so that Terry can spend her last years close to family. At one point, before the decision is finalized, a tense scene finds Diana crying and shouting at Pat that she can’t possibly know how much she loves her Auntie Terry, who’s lost a worrying amount of weight over the past year, and why can’t Pat just let her help? Her heart is clearly in the right place, and determining the best course of action for an elderly relative is discombobulating and stressful under the best of circumstances. But neither Diana nor any other members of her family seem willing to extend to Pat the same sympathy they demand of her. Asking two gay women to leave their home of 60 years, where they have a loving chosen family, to start up anew in a facility without any other gay couples and only vague assurances they won’t be discriminated against? That must have been extraordinarily difficult for Pat — and Terry, even with the promise of nearby family — and yet that difficulty is only alluded to, rather than given the full weight it deserves.

In a recent piece for her newsletter, the writer Britni de la Cretaz noted that even though the film’s reviews have been mostly glowing, “reactions from queer folks I spoke to tended to mirror mine.” She felt, contrary to all the positive coverage, that “Terry and Pat deserved better.” While she’s grateful, like I am, for an increase in stories about our communities and our history, and therefore hesitant to critique new additions, “I can’t help but feel frustrated at what feels like a flattening of the context and community queer people exist within.” She quotes Ryan Murphy, a producer on the project, who recently told Salon, “It has been extremely gratifying to see how these LGBTQ themes clearly resonate for a wide range of audiences.”

And maybe that’s the problem, de la Cretaz writes: “that we’re too worried whether a piece of work will resonate with ‘a wide range of audiences’ rather than whether it was made to resonate with the community it’s presumably about.”

One review applauds the movie for “bring[ing] the duo’s love out of the shadows,” giving it “a long-overdue chance to shine.” A lot of the press and promotional material around the film treats it as a great uncloseting — Pat and Terry, liberated at last. But they were only ever closeted from the straight members of their family and from elements of straight society; it’s not as if they were living their whole lives secreted away, as much as a title like A Secret Love might have you believe. They weren’t even explicitly hiding from their family; both Pat and Terry were heavily involved in the children’s lives since they were born. They just hadn’t named what had to have been their quite obvious love and affection for each other. Just because straight people still can’t or won’t recognize queer love for what it is doesn’t mean queer people are living a lie until they define their lives in explicit ways that straight people can no longer ignore. What makes this story such a beautiful one (which does come through, thankfully, in the movie’s strongest moments) has little to do with how long Pat and Terry kept this secret, and everything to do with the enduring power of queer love — closeted or not. ●