Nothing Could Make Her Body Stop Itching. Would It Ever End?

It was dark by the time the 41-year-old woman was able to start the long drive from her father’s apartment in Washington, D.C., to her home in Westchester County, N.Y. She was eager to get back to her husband and three children. Somewhere after she crossed the border into Maryland, the woman suddenly developed a terrible itch all over her body. She’d been a little itchy for the past couple of weeks but attributed that to dry skin from her now-faded summertime tan. This seemed very different: much stronger, much deeper. And absolutely everywhere, all at the same time.

The sensation was so intense it was hard for the woman to pay attention to the road. She found herself driving with one hand on the steering wheel and the other working to respond to her skin’s new need. There was no rash — or at least nothing she could feel — just the terrible itch, so deep inside her skin that she felt as if she couldn’t scratch hard enough to really get to it. By the light of the Baltimore Harbor Tunnel she saw that her nails and fingers were dark with blood. That scared her, and she tried to stop scratching, but she couldn’t. It felt as if a million ants were crawling all over her body. Not on her skin, but somehow under it.

The woman had gone to Washington to help her elderly father move. His place was a mess. Many of his belongings hadn’t been touched in years. She figured that she was having a reaction to all the dust and dirt and who knows what else she encountered while cleaning. As soon as she got home, she took a long shower; the cool water soothed her excoriated skin. She lathered herself with moisturizer and sank gratefully into her bed. But the reprieve didn’t last, and from that night on she was tormented by an itch that no scratching could satisfy.

A Year of Unrelenting Agony

After two weeks, she went to an urgent-care center. There didn’t seem to be a rash or bites, the doctor told her, but her skin was so red and scratched up that he might not be able to see if there was an allergic reaction or bites from bedbugs or fleas beneath it all. He started her on a two-week course of prednisone; that should calm your itch, he told her, no matter the cause. She took it faithfully. It didn’t help.

She cleaned every inch of her house and hired an exterminator to search for bedbugs. She took her dog and two cats to the vet to have them treated for fleas. She bought new mattresses. None of it helped.

She saw a dermatologist, who thought it was eczema and recommended a moisturizer. Useless. She went to her internist, who wondered if this could be a symptom of a disease beyond her skin. He asked her if she had noticed any other symptoms. No, she felt fine — except for this itch. He ordered some blood tests, but the only abnormality found, he told her when he called with the results, was a mild iron-deficiency anemia. That can cause pruritus — the medical term for itch — though not usually this severe. She was prescribed an iron supplement and waited for a relief that never came.

An allergist found a reaction to dust mites and a chemical preservative used in some cosmetics and cleaning products called methylisothiazolinone (MIT). The patient bought an air purifier, put allergy covers on her (new) mattresses and pillows and searched labels for any MIT-containing products and replaced them. She took antihistamines. The itch continued.

A second dermatologist took biopsies from the skin on her thigh and arm. They were unrevealing. He started her on a steroid cream to treat what he thought might be eczema. It had no effect. When a third dermatologist, recommended by a close friend, also suggested that she had eczema, the patient burst into tears. She’d been suffering for over a year. Was she going to feel like this for the rest of her life? That doctor prescribed gabapentin, which can be used to treat pain and itching caused by injured nerves. The drug helped — she was able to get to sleep at night, when the itch was its worst. And it helped a little during the day. But even so, she was still horribly itchy.

A New Round of Questions

The patient’s husband started doing some research of his own. He found a couple of specialists he thought might help. One was in London, but another, Dr. Melissa Iammatteo, a specialist in allergy and immunology, was quite close. By the time he made this discovery, though, Covid-19 was rampaging through Westchester. His wife scheduled an appointment for the early summer, crossing her fingers that by then it would be safe for her to see the doctor.

It was a bright, cool day when the woman finally met Iammatteo. On exam, the patient’s arms and legs were covered with blotches of inflamed red skin, shiny in places and covered with marks from scratching. The patient repeated the story she’d already told a half dozen times: She felt fine except for this terrible itch that drove her nuts.

Iammatteo pressed: Did she really feel fine? Like the patient’s internist the year before, she was worried about problems that went beyond the skin. Iammatteo asked her specific questions, which helped the patient realize that she did not actually feel healthy. Yes, the patient acknowledged, she was tired. Yes, she had recently lost a little weight. And, come to think of it, yes, she did sometimes feel feverish, though, no, she didn’t have night sweats.

When dealing with patients who have already had an extensive work-up and seen many providers, it’s important to focus on the less likely causes of a symptom. Iammatteo forced herself to think broadly through all the different types of diseases that can cause itching. Diseases of the kidneys and liver are common causes of pruritus — but repeated testing was normal. Infection with parasites or viruses can cause itching; she would order tests for some of the more common of these, including toxocara, a type of parasite carried by cats and dogs, and for H.I.V. It was also important to check for cancer: Nearly 10 percent of patients with persistent unexplained pruritus are found to have cancer. She would order a chest X-ray to look for enlarged lymph nodes. And she would refer the patient to a cancer specialist just in case she’d missed anything.

She reviewed the plan with the patient, who needed to go to the lab and the radiology department before she left the building. Iammatteo would call her with the results, she said; it would probably take a few days. 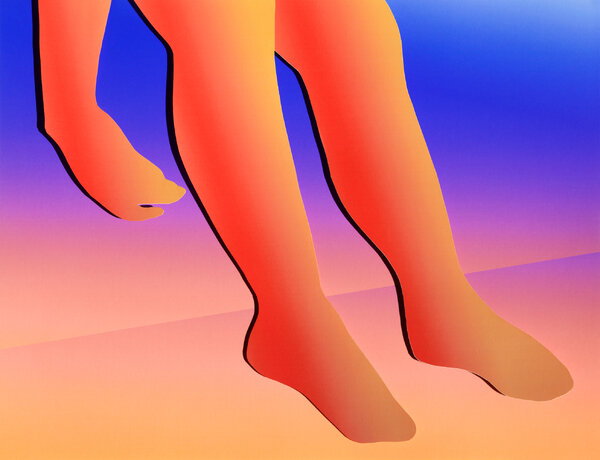 A Flurry of Tests, Scans and Biopsies

The patient hadn’t been home for long when Iammatteo called. She had some results. It wasn’t an answer, but a clue. The X-ray revealed a mass the size of a softball in her chest. Iammatteo wasn’t sure exactly what it was but had sent the image to the cancer specialist. And she had moved up the patient’s appointment with the specialist to that week. Iammatteo was sure he would be able to tell them exactly what was going on.

The next few days were a flurry of blood tests, scans and biopsies. Although this was scary, the patient was eager to finally have an answer — even if it meant she had cancer. And that is what it meant. She had Hodgkin lymphoma, an unusual cancer of a type of white blood cell known as lymphocytes. This cancer usually starts in the chest or neck and spreads through the lymph nodes. H.L. is often diagnosed when patients develop enlarged lymph nodes in the neck or under the arms. This patient never had that. Up to 30 percent of patients with H.L. report having pruritus for months or occasionally years before a diagnosis is made. Why this occurs is not well understood.

Treatment for this disease can be tough, but the prognosis is good. The patient would need months of chemotherapy. She was eager to start. “I would have done anything to get rid of this itch,” she told me. The itch subsided significantly after the first round of chemo. After six weeks it was gone completely. And it hasn’t come back.

As the patient neared the end of her treatment, she tracked down Iammatteo, who now only sees patients with severe drug allergies, to thank her for helping to beat that all-consuming itch.

Lisa Sanders, M.D., is a contributing writer for the magazine. Her latest book is “Diagnosis: Solving the Most Baffling Medical Mysteries.” If you have a solved case to share with Dr. Sanders, write her at Lisa [email protected]