It’s no secret that Pamela Anderson was not a fan of the Hulu series, Pam & Tommy, which chronicled the former couple’s sex-tape scandal. Now, the 55-year-old actress is sharing her side of the story in the new Netflix documentary, Pamela: a love story, which premieres on Jan. 31.

Lily James, who portrayed Anderson in the series, reached out to the pop-culture icon multiple times, but the Baywatch star never returned her calls — and for good reason. “It really gives me nightmares,” she said in the documentary, via Yahoo Entertainment U.K. “I didn’t sleep last night at all. I have no desire to watch it, I’m not going to watch it. Never watched the tape, I’m not going to watch this.”

While she certainly doesn’t blame James for taking on the role, it was just too painful for Anderson to relive all the trauma. “Nobody really knows what we were going through at that time. They should’ve had to have my permission,” she continued. She even reached out to her ex, Tommy Lee, for advice about how to deal with the onslaught of media attention surrounding the series.

She added, “I texted Tommy and said, ‘How do you feel about everything?’ and he said ‘Pam, just don’t let it hurt you as much as it did the first time’. Why would I want to go through that again?” In the end, Anderson let her son Dylan Lee, 25, watch the show for her and he summed up his mom’s feelings. “Why would you bring something up from 20 years ago that you know f**ked someone up?” Dylan said in the Netflix documentary. “[Taking] the worst part of her life, and making a semi-comedy out of it, doesn’t make sense.”

Before you go, click here to see all the celebrity women who have posed for Playboy. 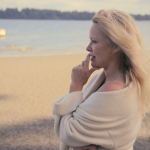