Arriving as 12 new models, Patek has made an effort to reinterpret an extensive range of aesthetics and features in familiar models. This year also sees the technical debut of the new Ref. 5326G-001 Annual Calendar Travel Time. Cosmetically, the color green has been incorporated into four models — the 5270, 4910 (Twenty-4), 5205, and 7130 (World time) — while blue makes its way onto the 5230 World Time, 7121, and the marvelous 5374 grand complications.

On top of the contemporary offerings, a sense of “vintage” was introduced within the Calatrava case as earthy tones of brown, beige, charcoal, and black come together for Patek Philippe’s take on a functional and elegant daily-wear watch in the ref. 5326 and 5226. 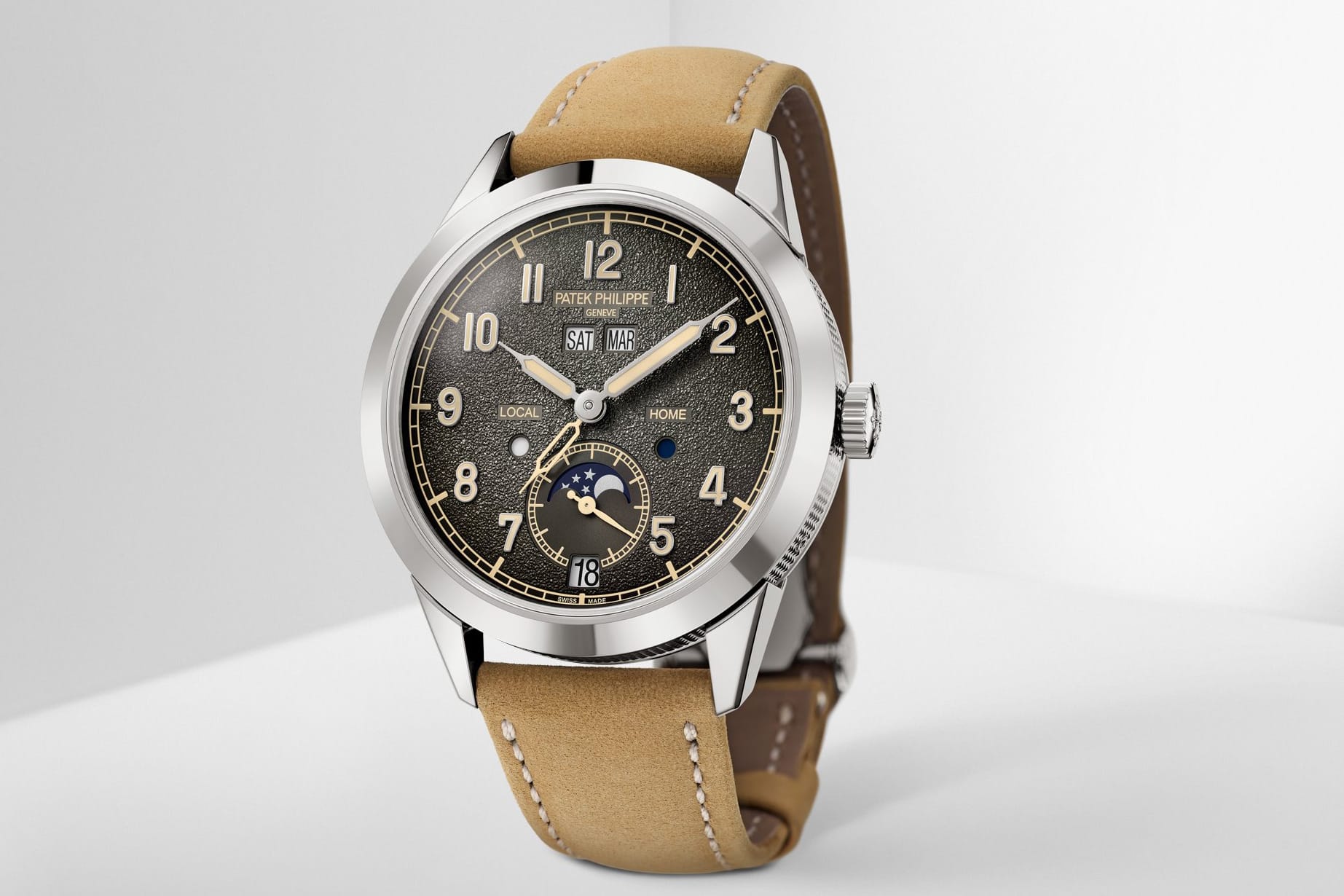 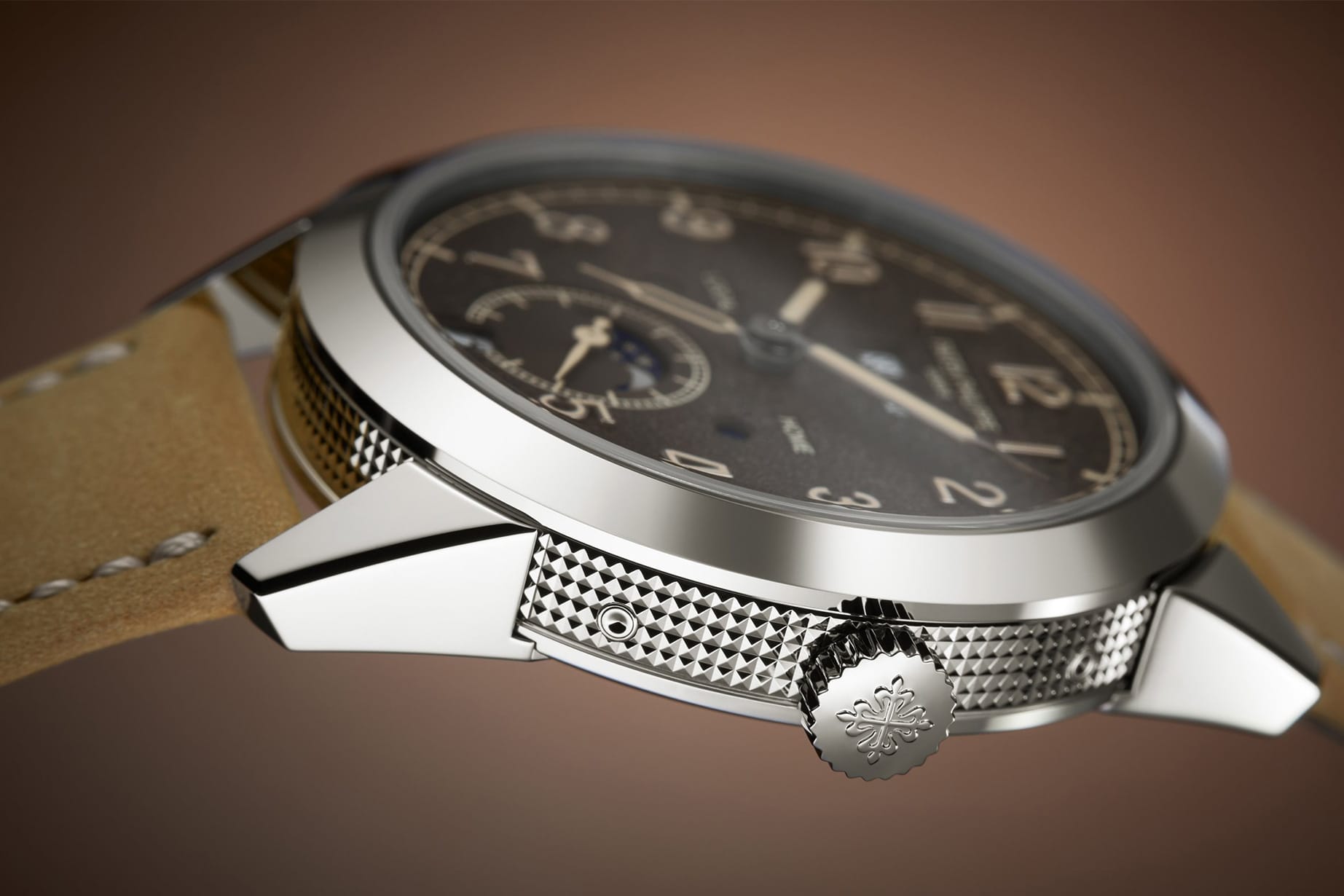 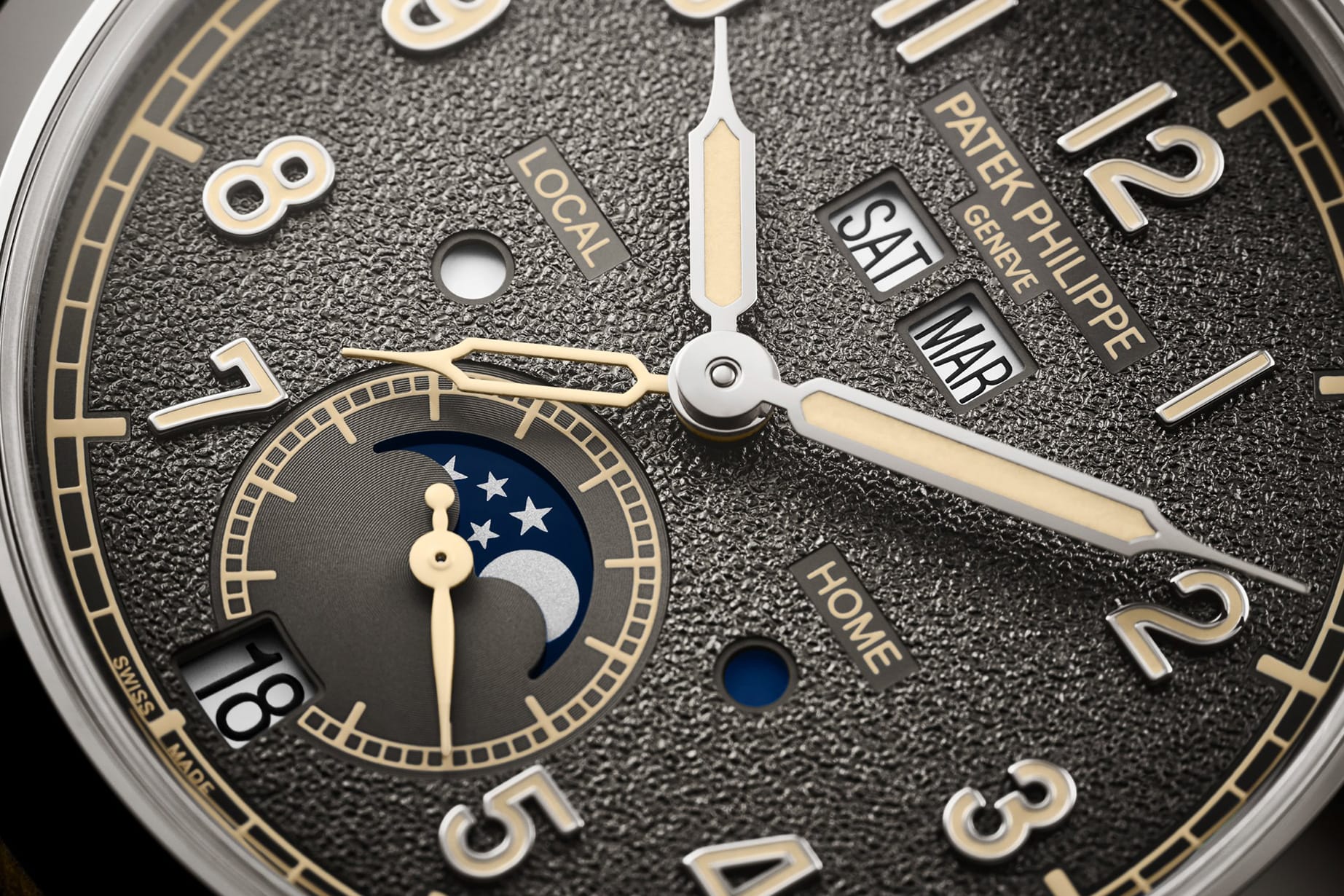 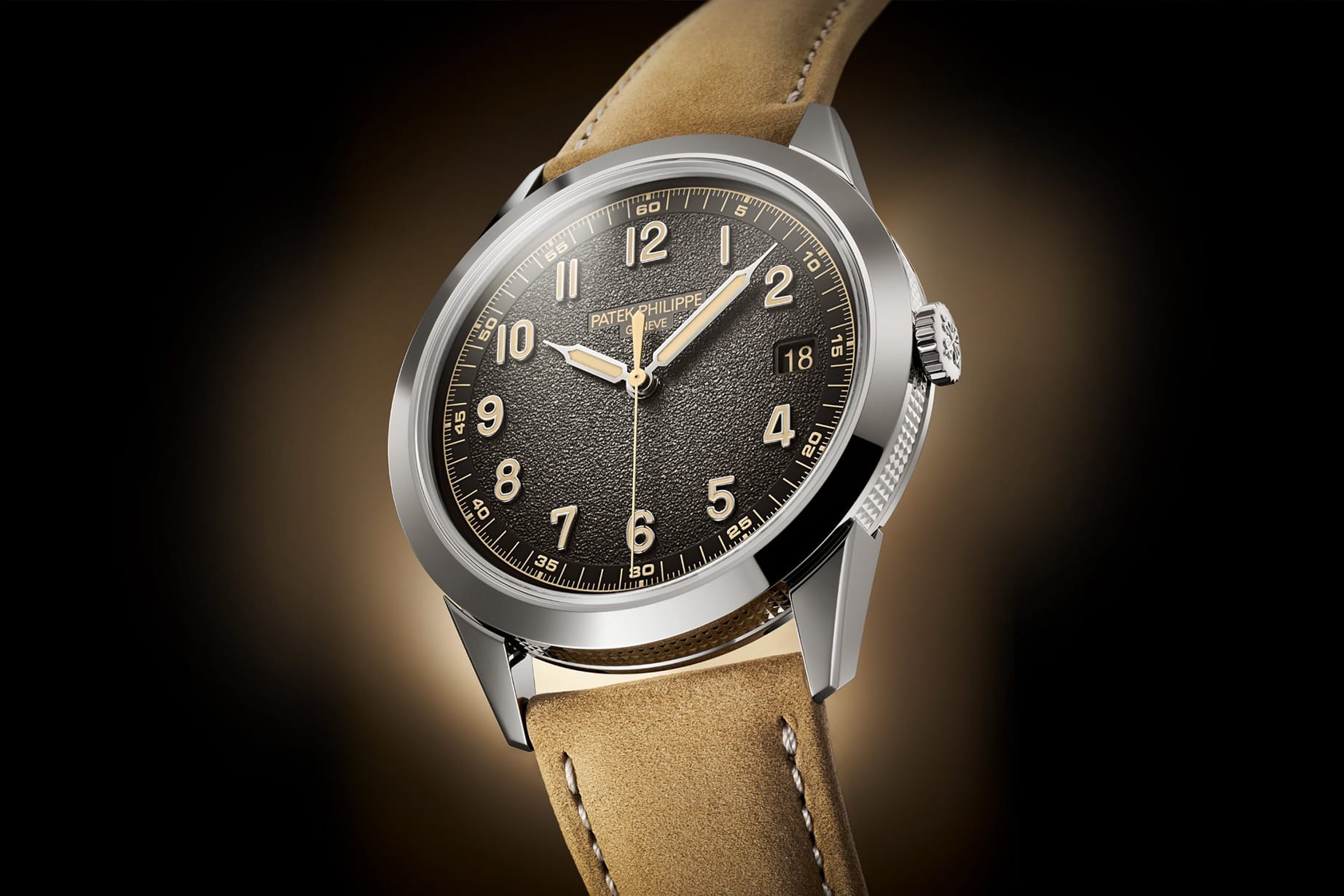 For the first time, Patek Philippe joins the annual calendar with a travel time function for the Ref. 5326G-001 Annual Calendar Travel Time. This self-winding caliber sees eight patents and might be a viable choice for those not sold on the Pilot Travel Time. Sitting at 41mm in a white-gold case, the design sees a granular dial that’s reminiscent of old cameras and is dressed with a Clous de Paris hobnail guilloche pattern at the rim of the case.

Patek Philippe will also be making a less robust version for those that appreciate the vintage styling — the Ref. 5226G-001. Aesthetically following the Ref. 5326G-001, this version will simply house time and date in a white gold 40mm case. Both watches come with interchangeable straps that compliment the watch’s design. The former watch will retail for approximately $70,000 USD while the later at $35,000 USD. 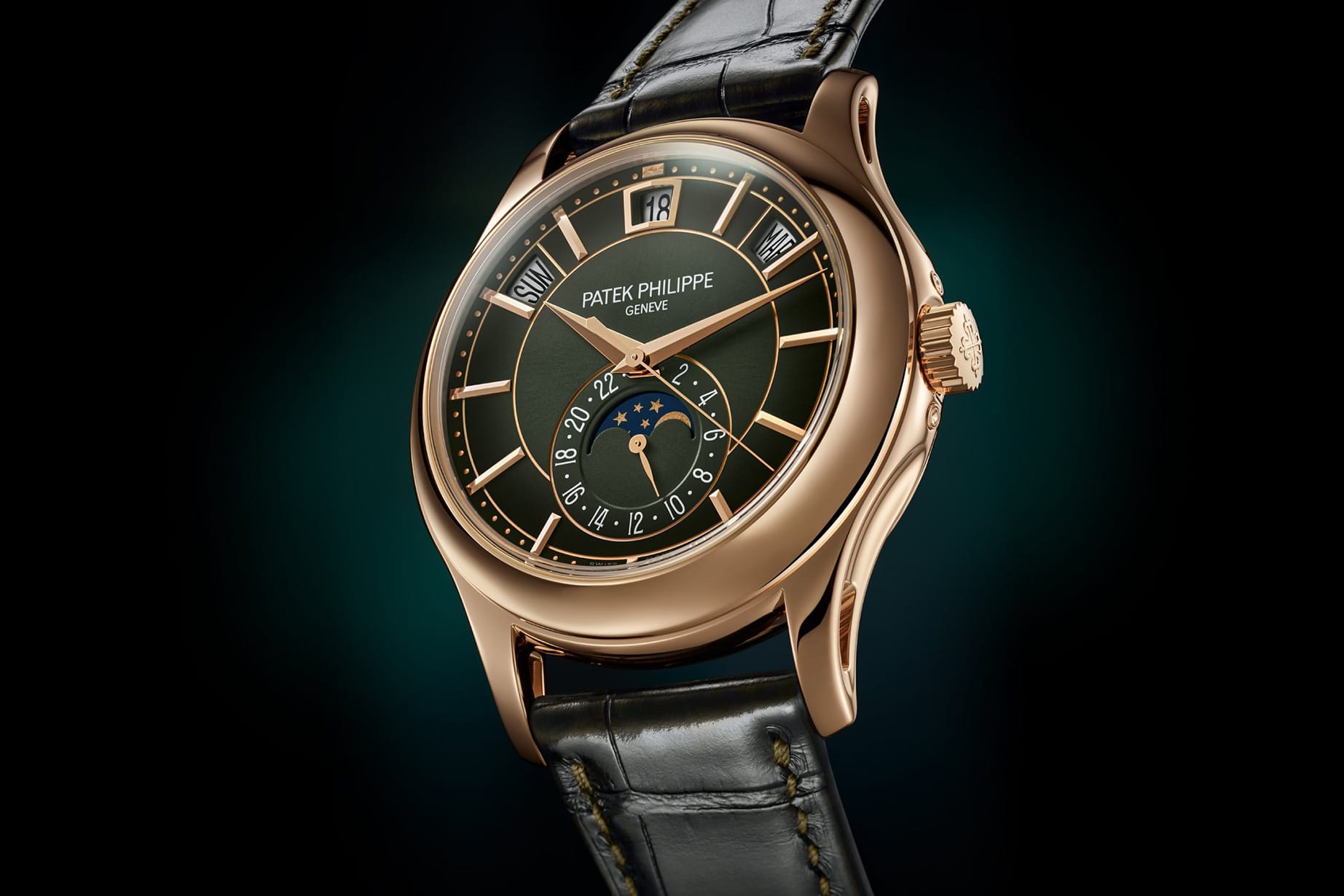 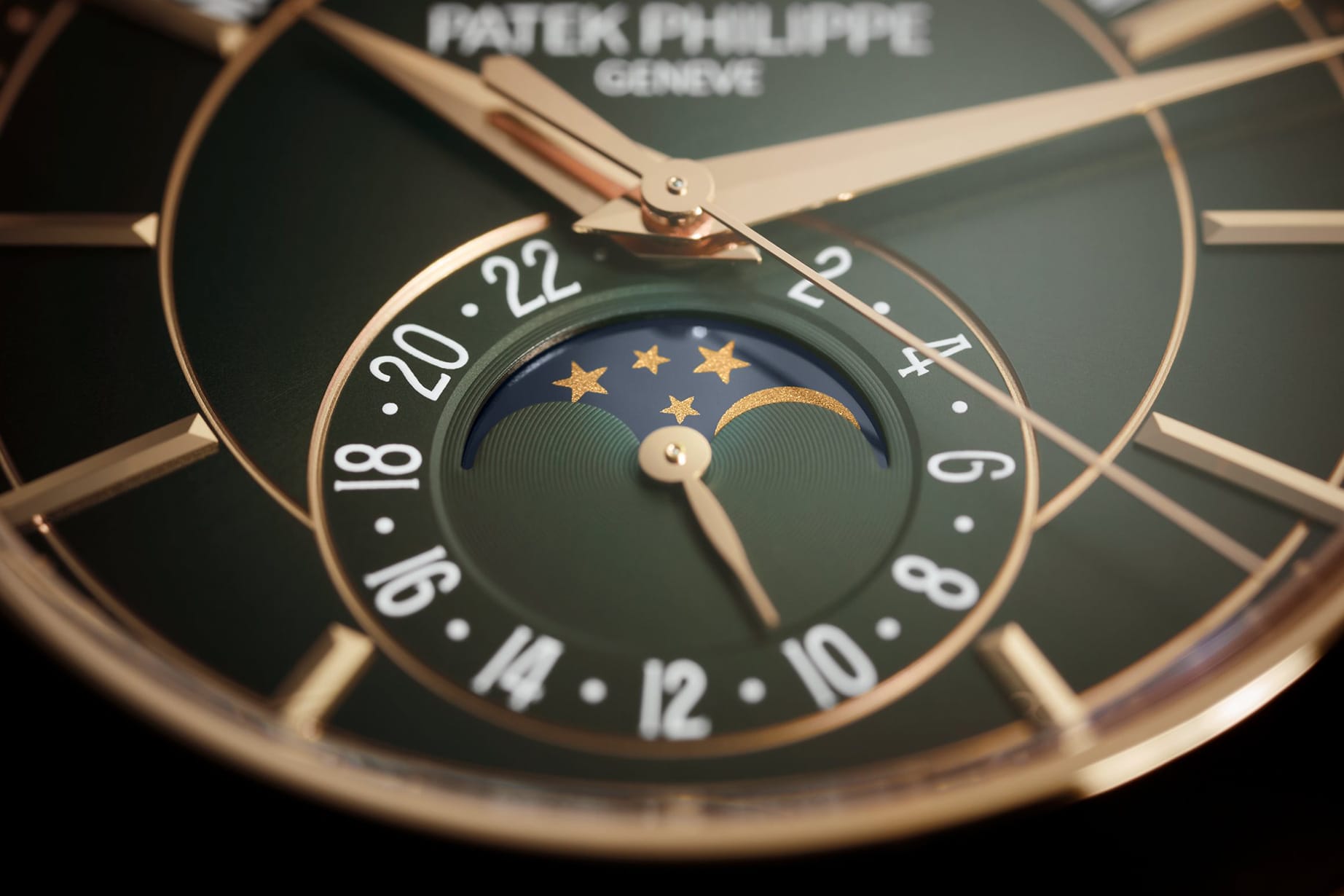 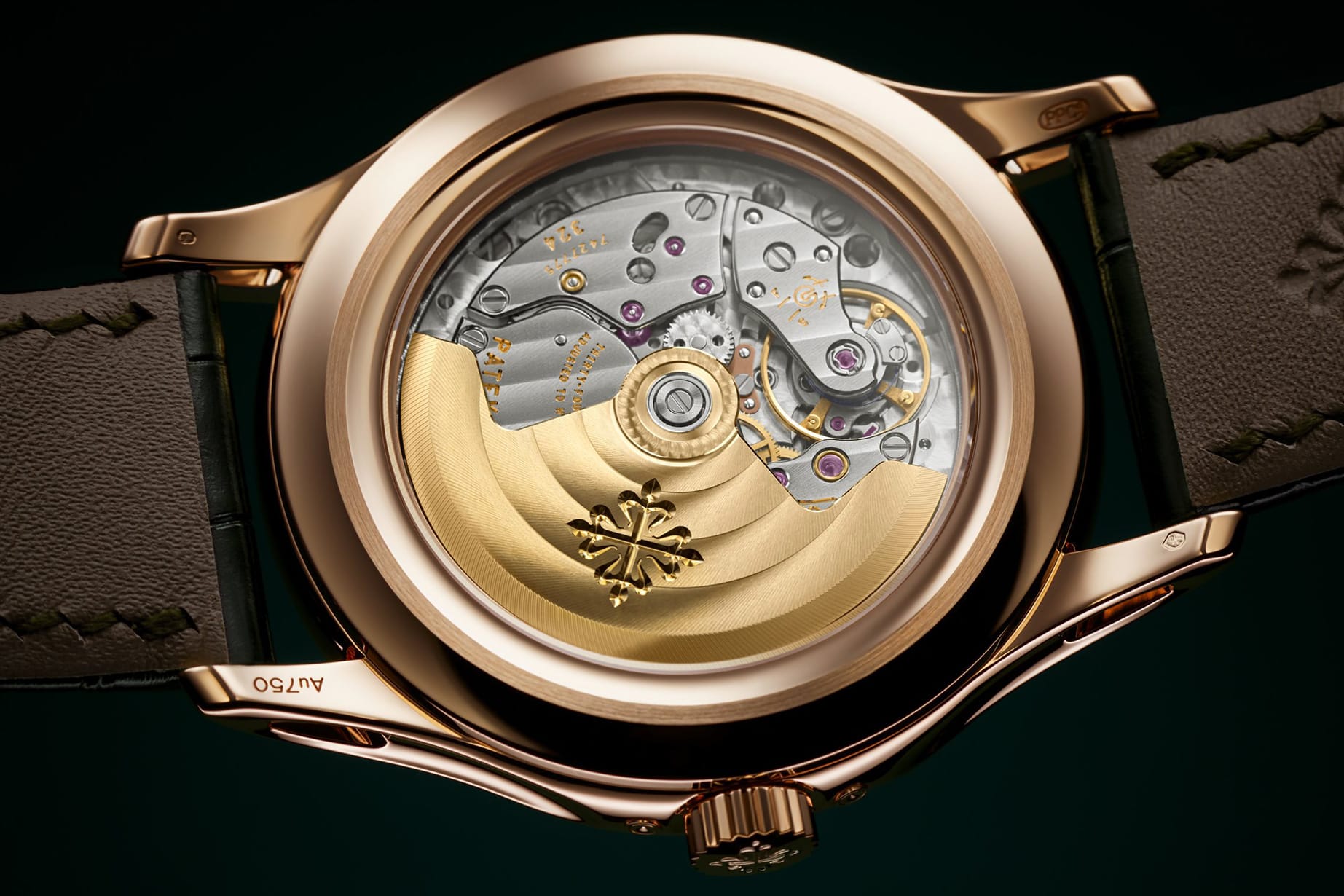 The Blue Sunburst 5205G now has a dance partner as a new Olive Green Sunburst dial version has been introduced in rose gold.

A dressier alternative to the blue version — and back to sans-lume on the hands — the annual calendar takes on a more contemporary look as its rose gold hollowed flanks and skeletonized lugs work in harmony with the olive green dial. As it is a sunburst dial, various angles give off the impression of the dial as being black, especially when viewing the rim. The signature triple aperture windows are still intact while the gold and navy of the mooon phase jumps out thanks to the contrasting colors. This one is set for approximately $50,000 USD. 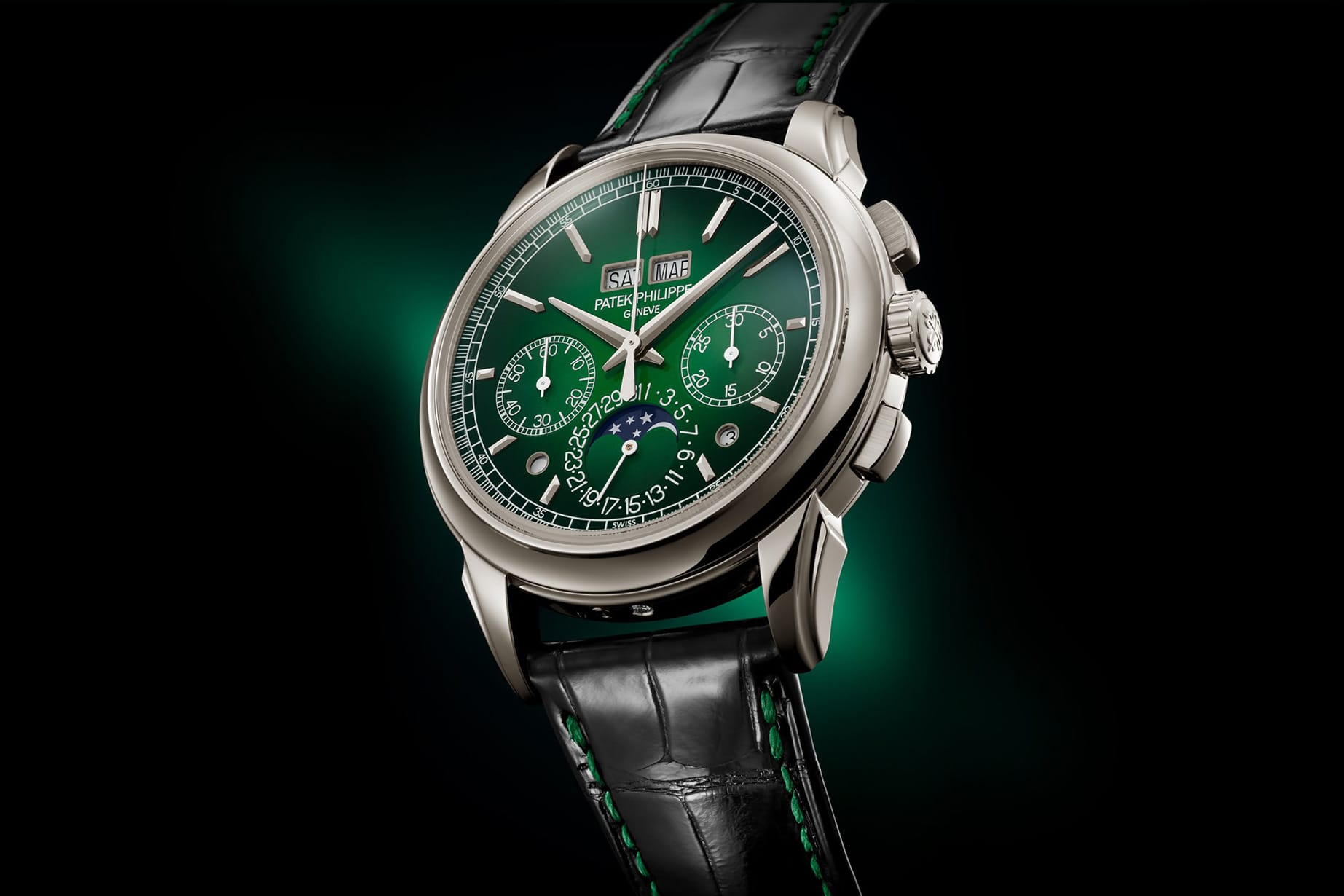 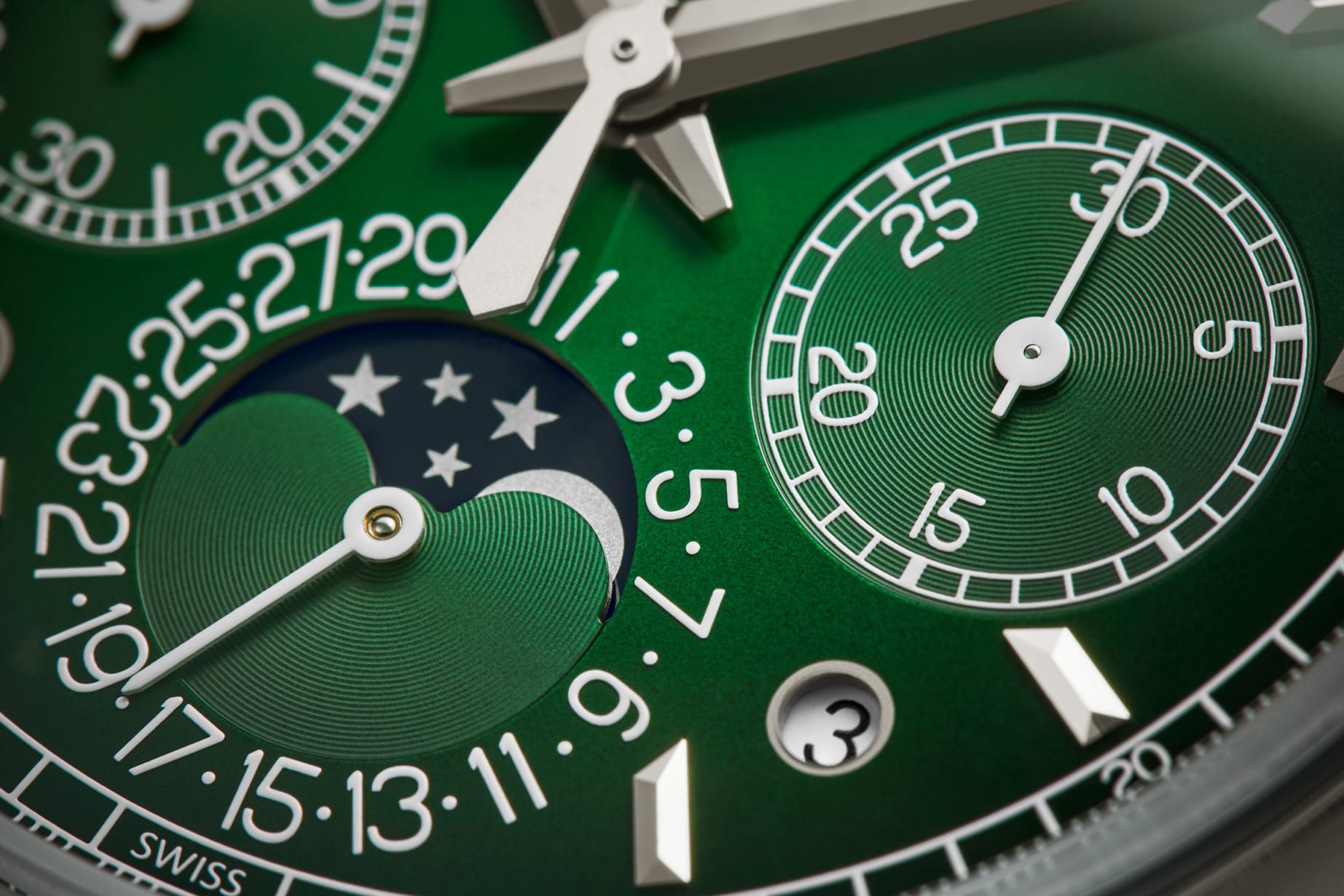 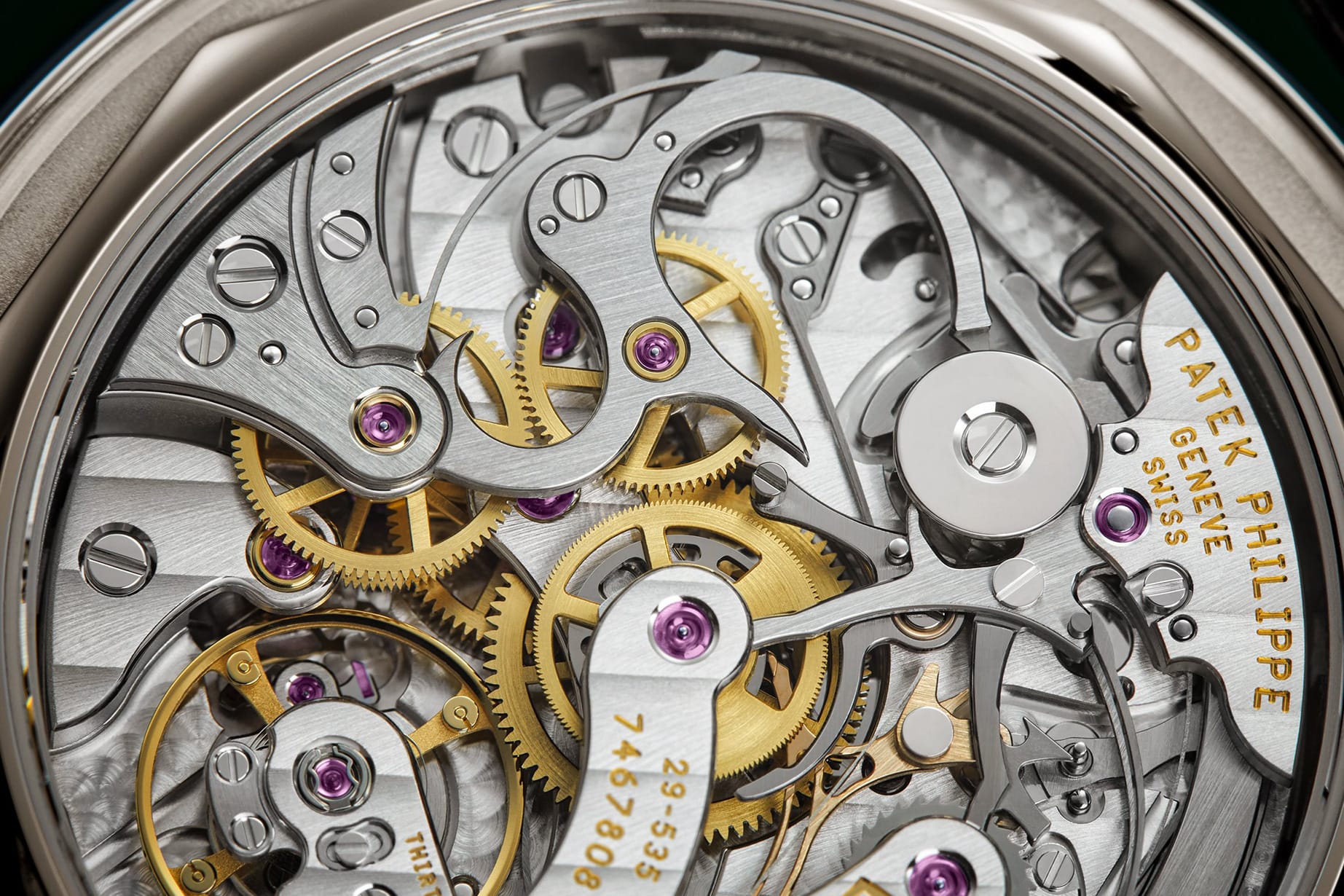 The 5270 — launched in 2011 — has been given some new life thanks to a new Laquered Green dial joined with a platinum case. This Grand Complications packs a tremendous amount of horological prowess with its six patented innovations that join to make the chronograph and perpetual calendar watch just 12.4 mm thick. The precious metal does come at a hefty price as this is set to retail for approximately $195,000 USD. 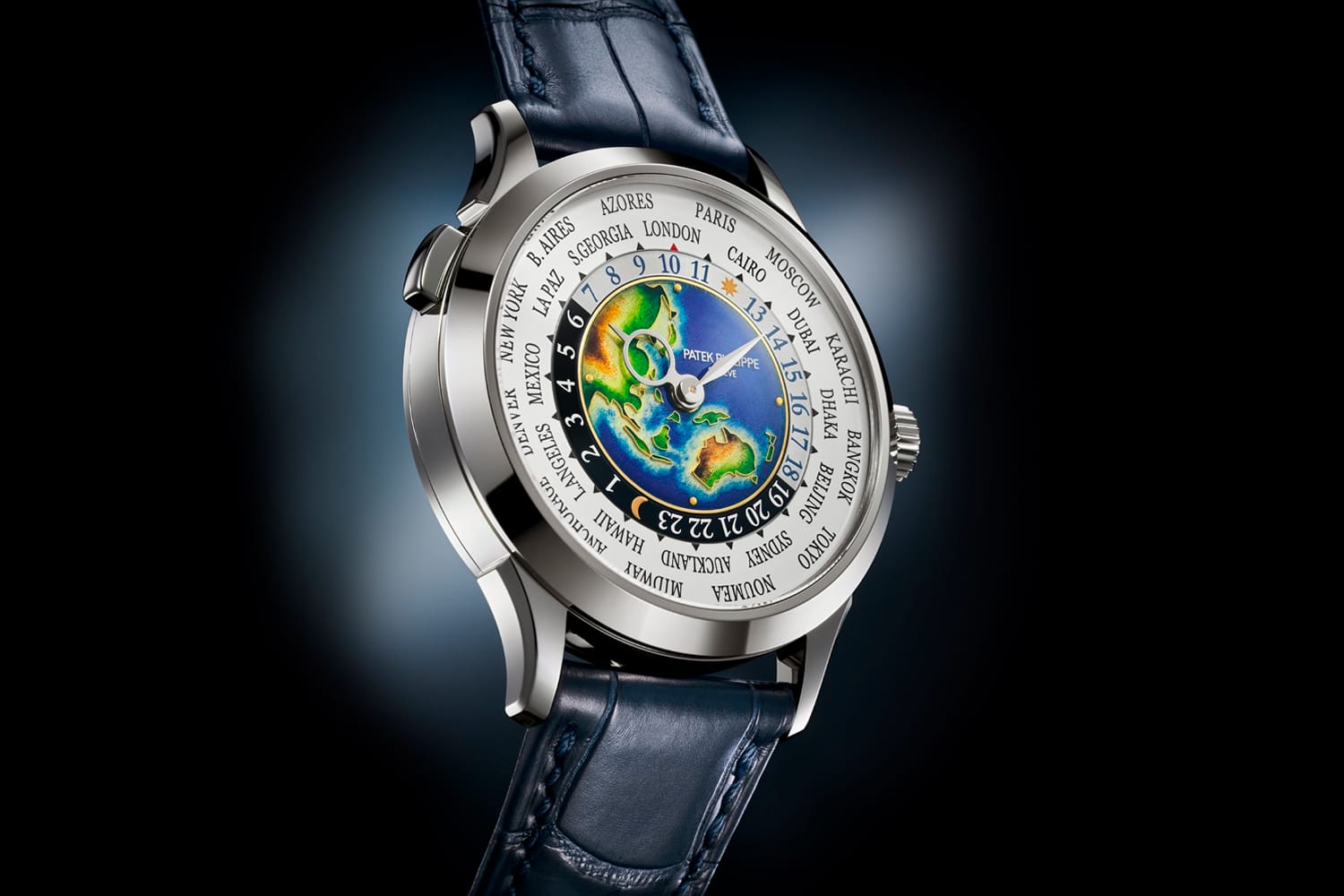 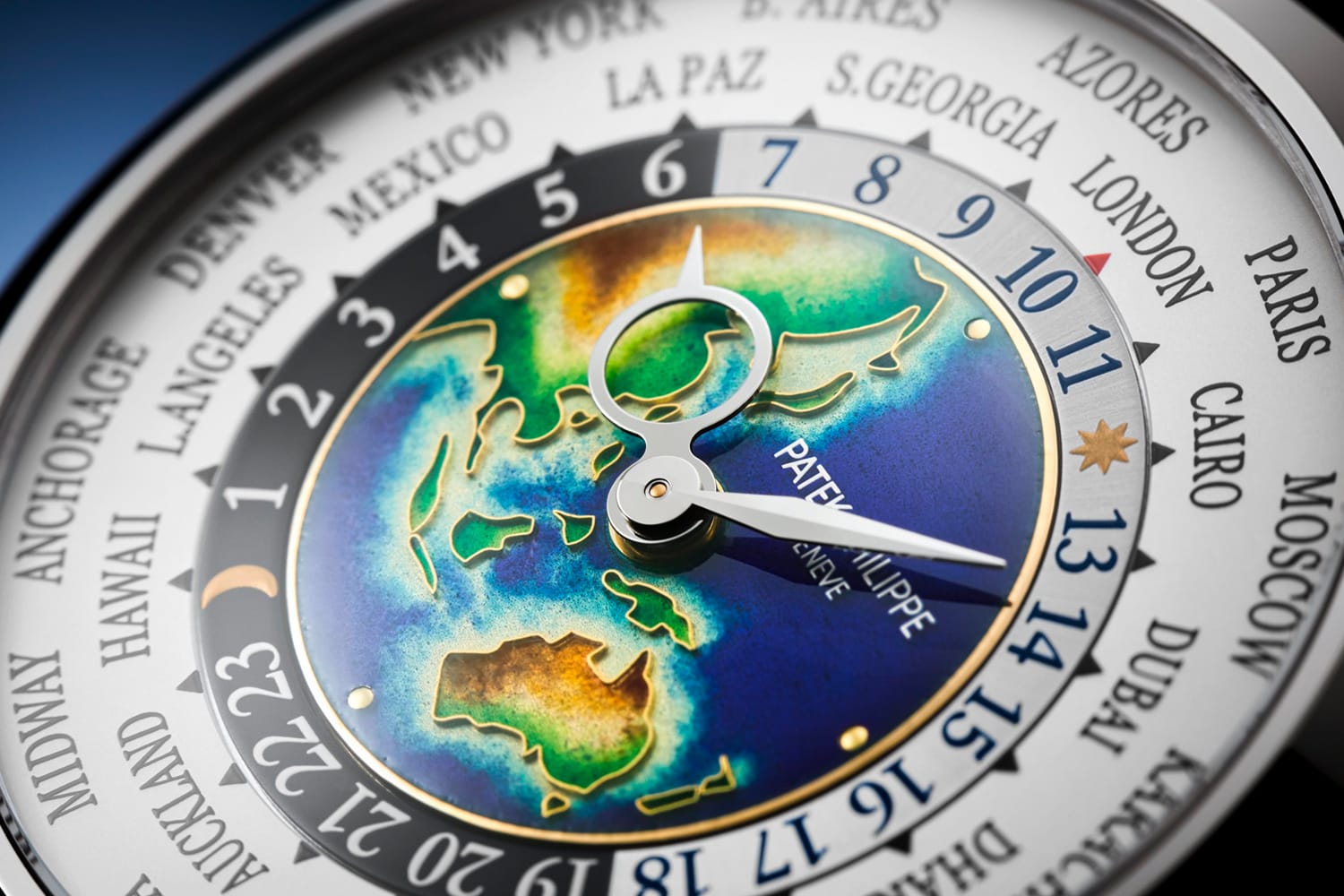 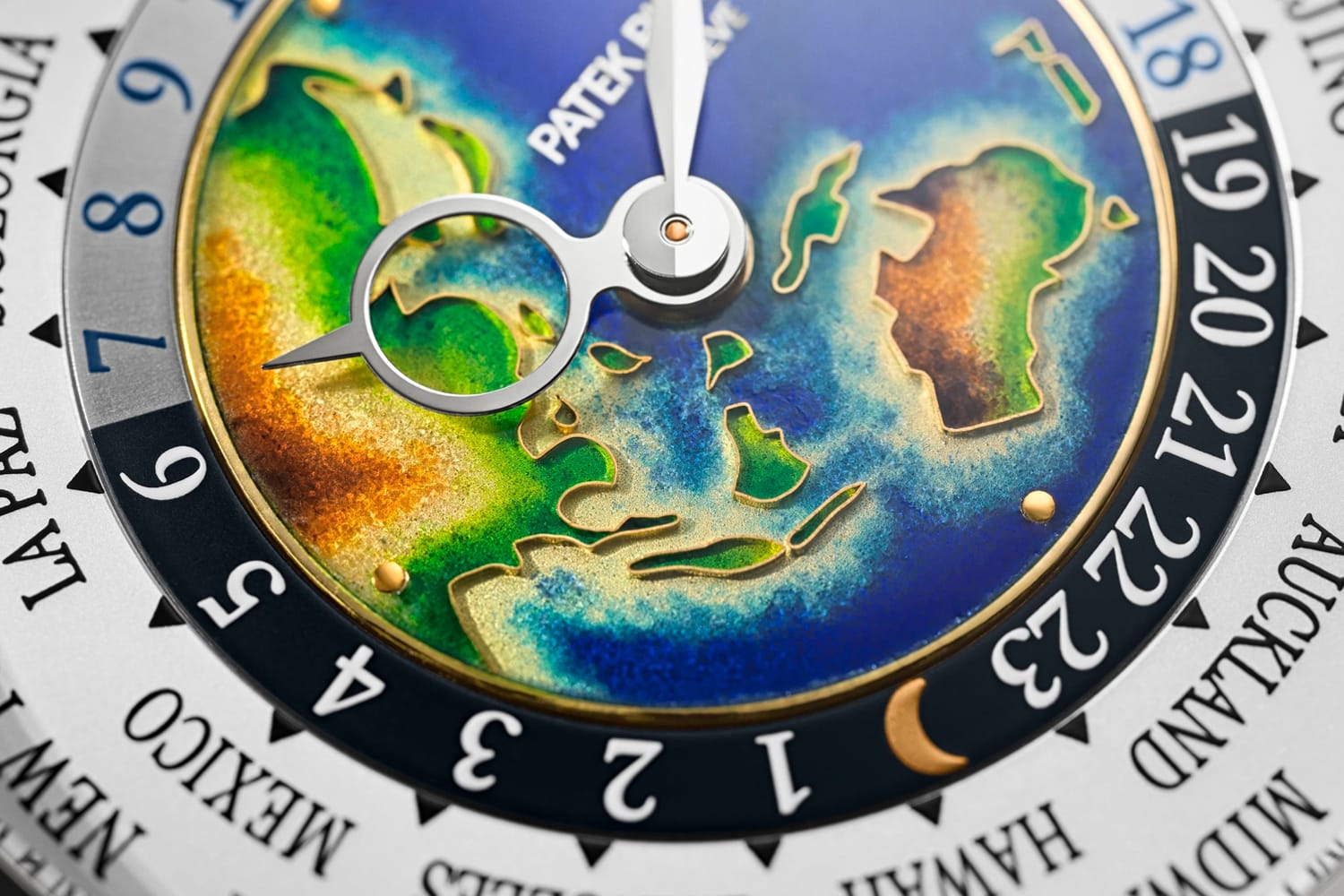 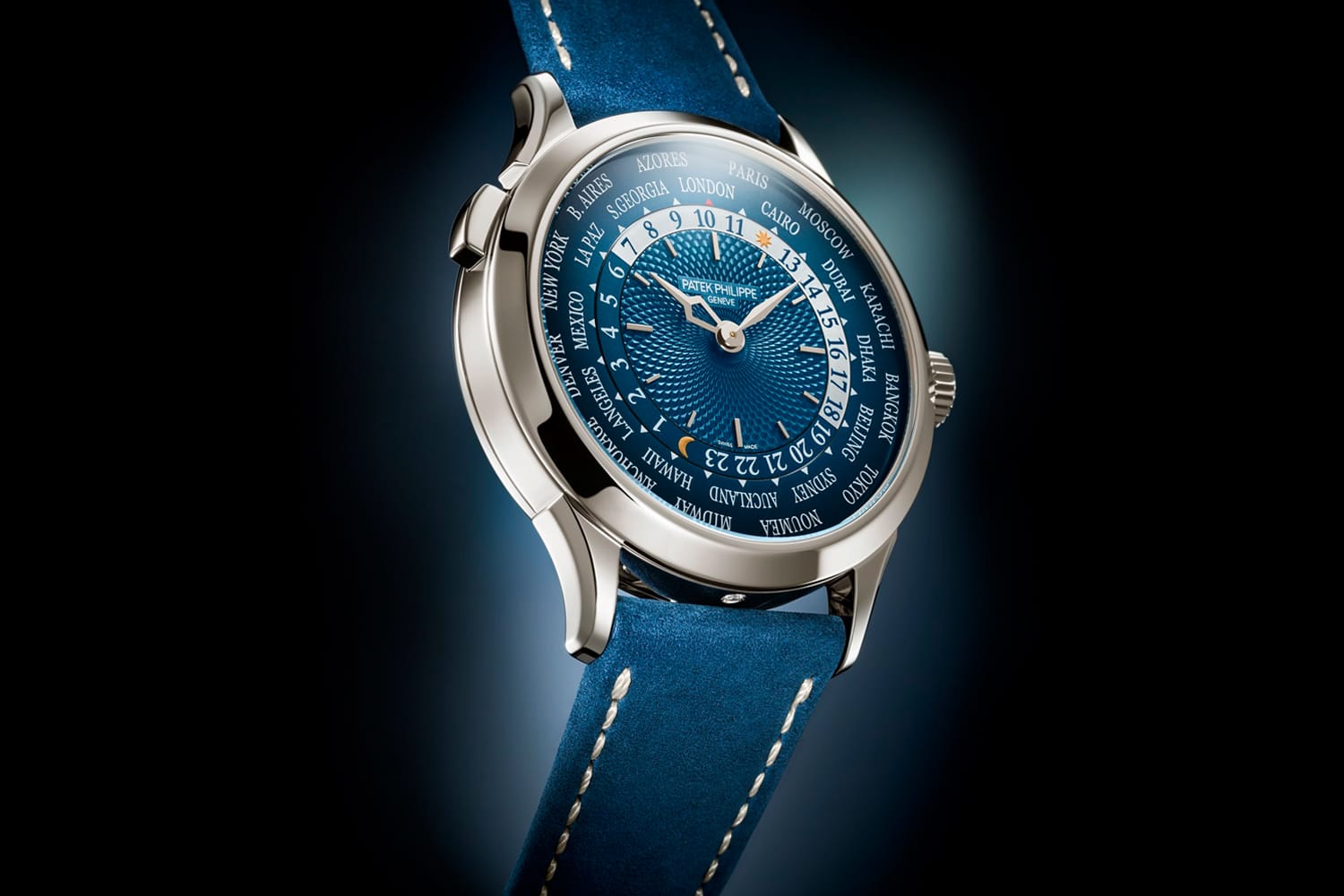 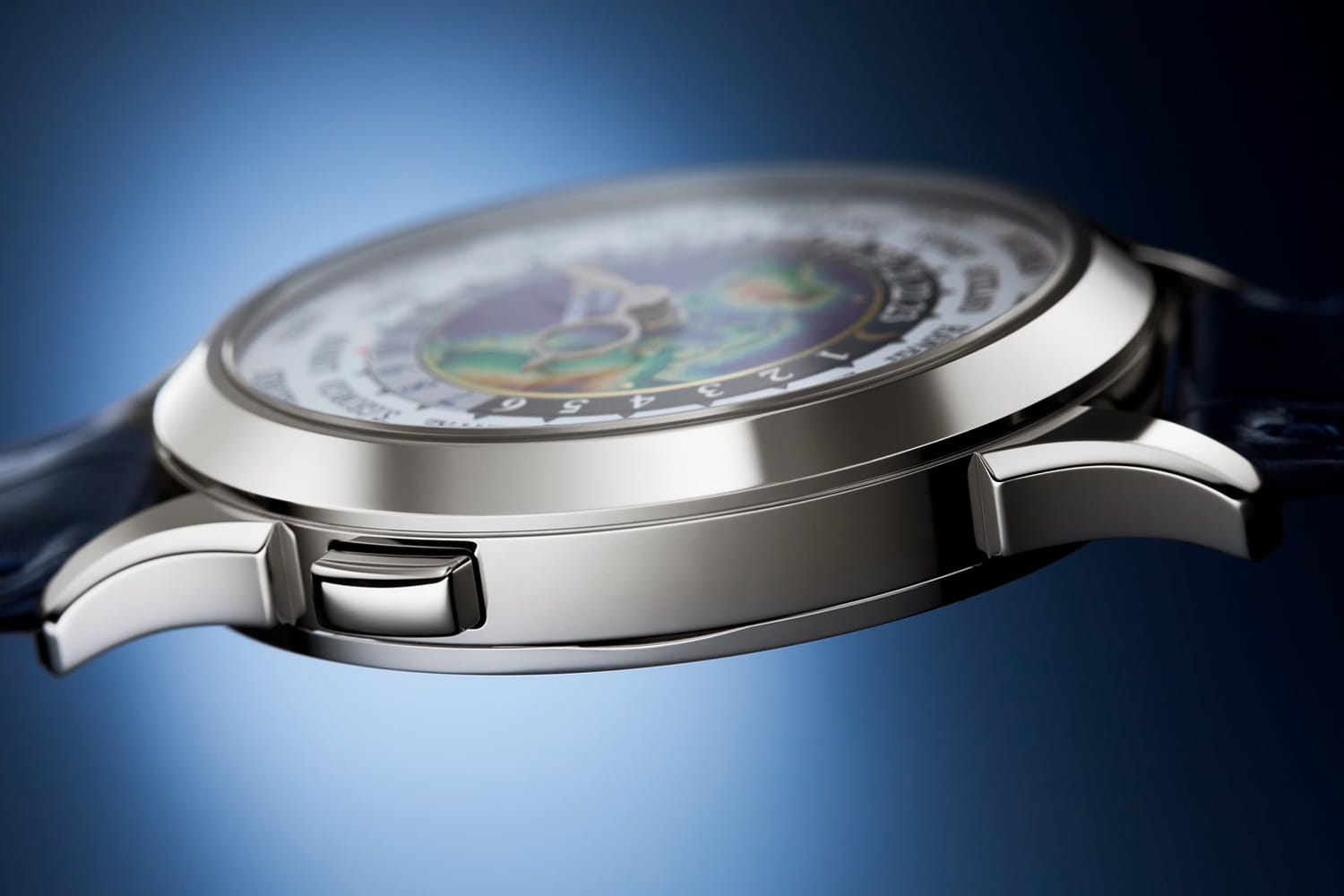 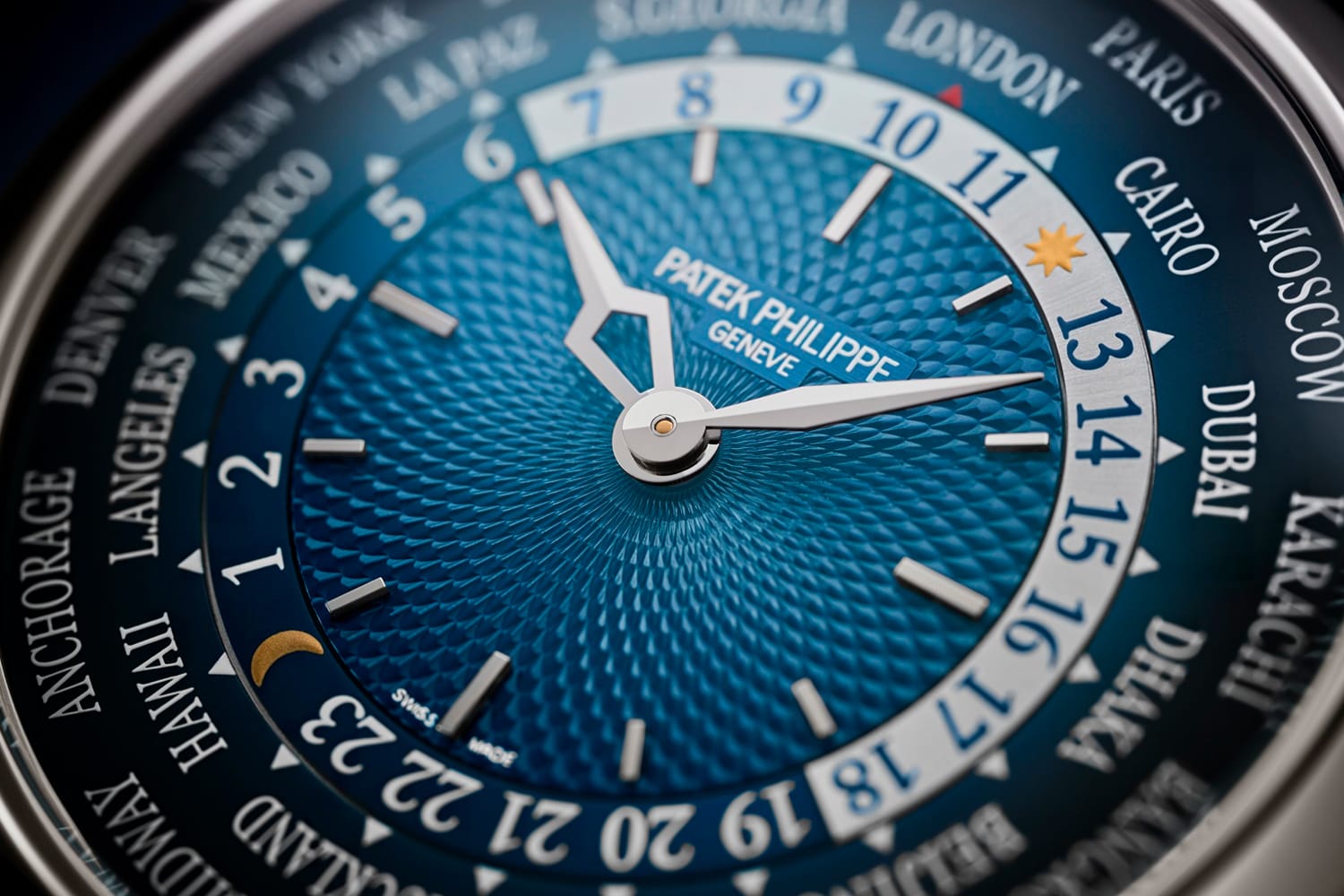 The World Time was not neglected this year as white gold now makes its way onto the Ref. 5231 and platinum on the 5230. The Ref. 5230P-001 sports a new blue circular hand-guilloched motif with a matching strap. The Grand Feu cloisonné enamel dial Ref. 5231G-001 now sees emphasis on South-East Asia and Oceania with four gold splangles. Just another way to track all 24 time zones on your wrist. The Grand Feu cloisonné enamel version will retail for approximately $82,00 USD while the Platinum version at $65,000 USD. 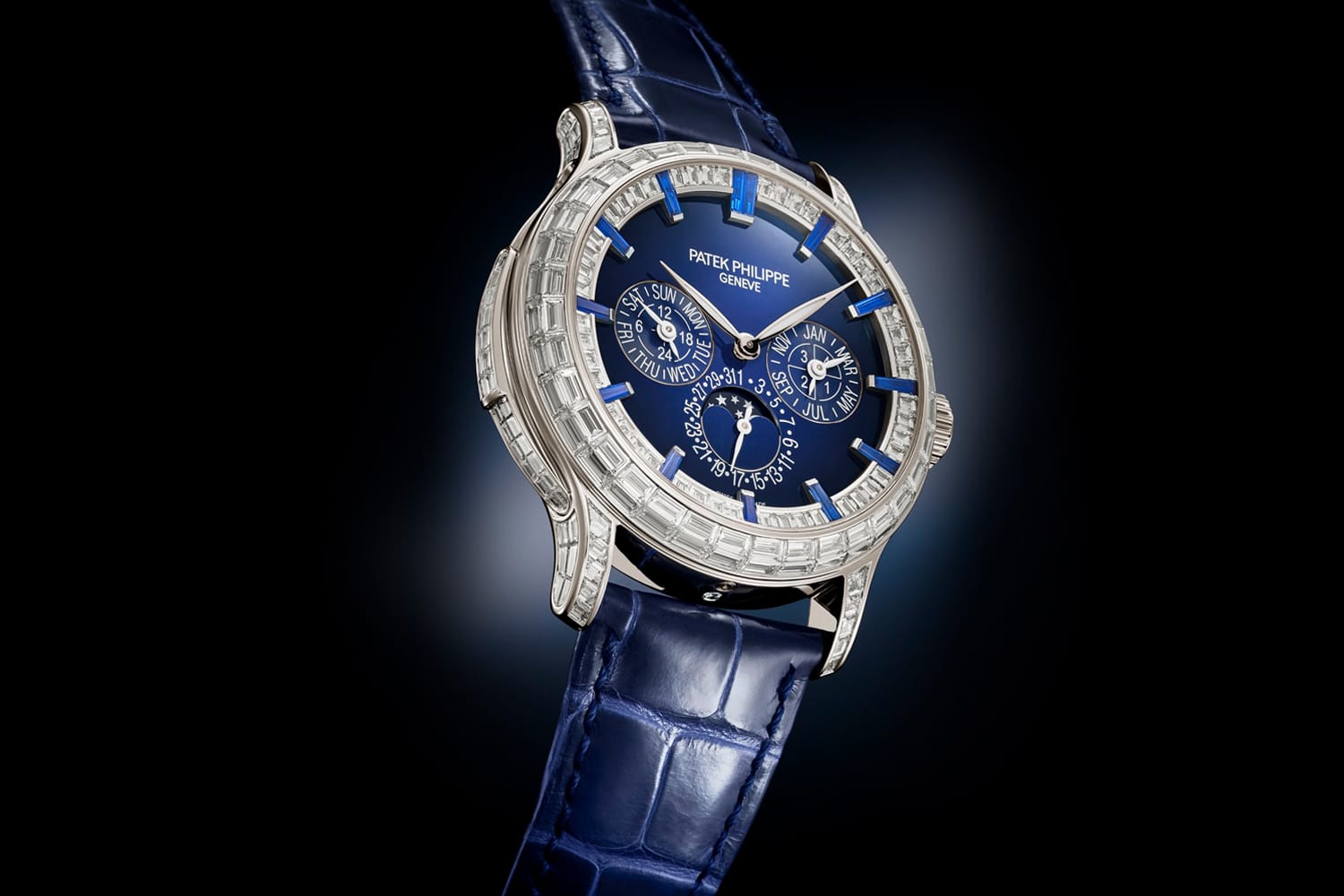 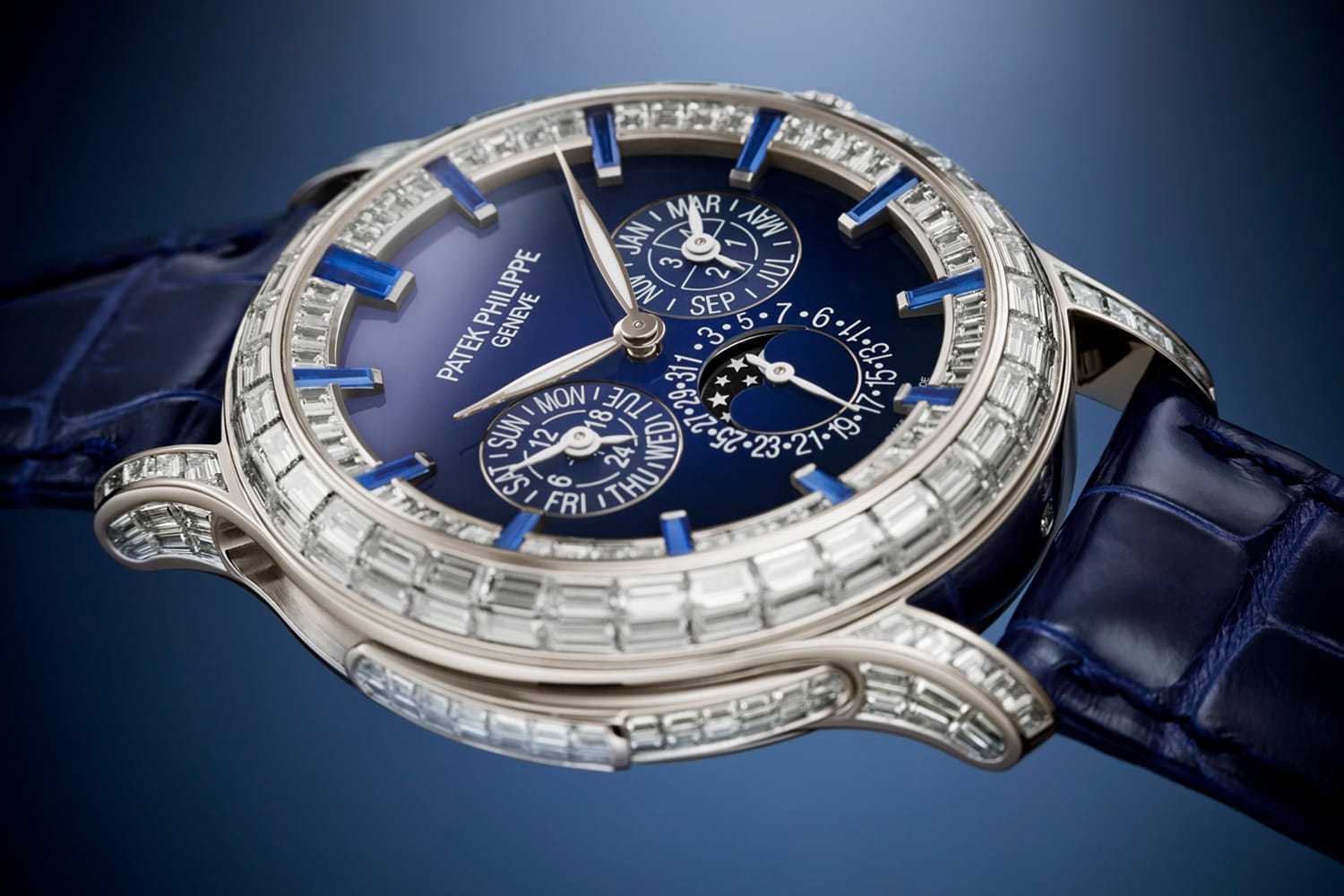 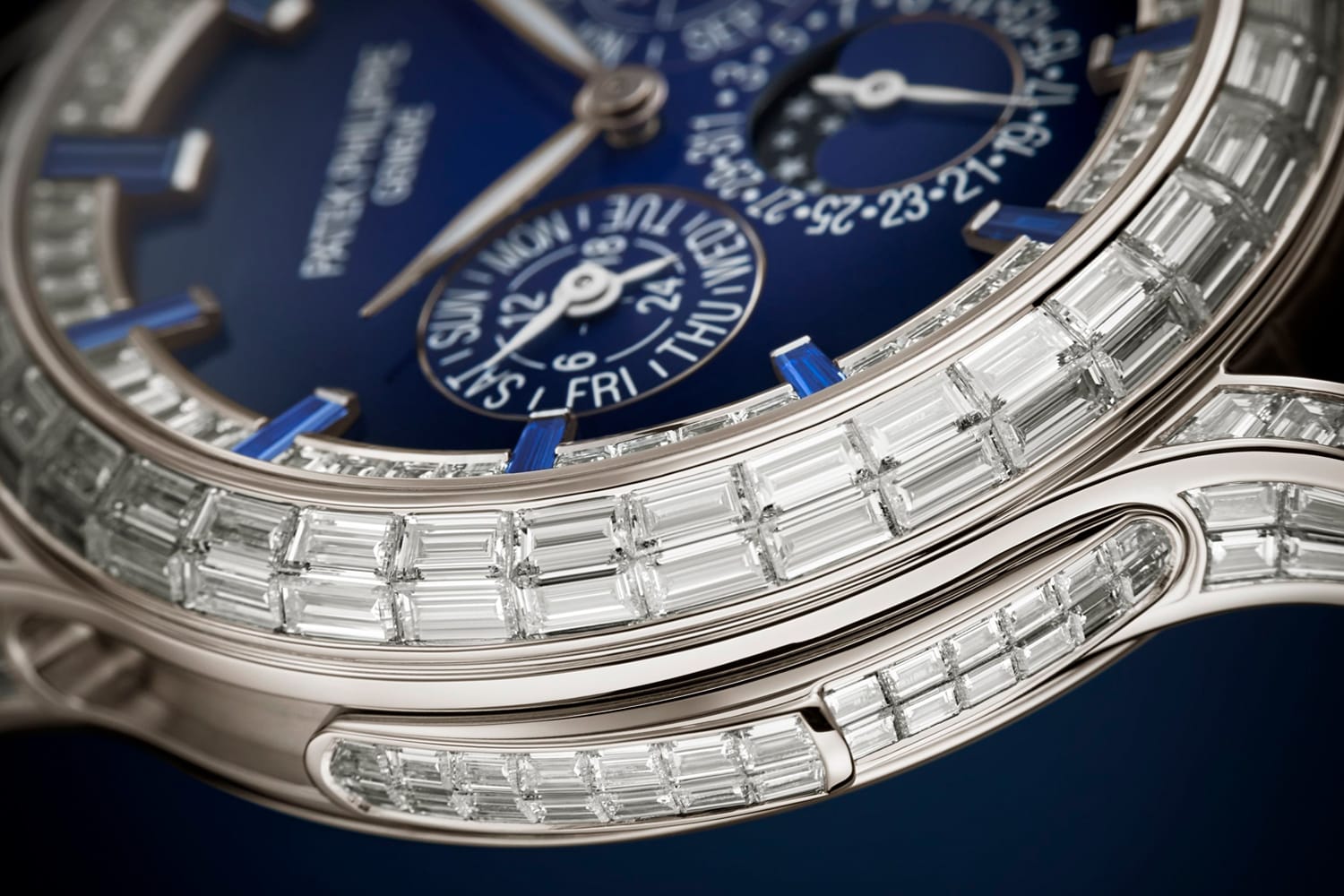 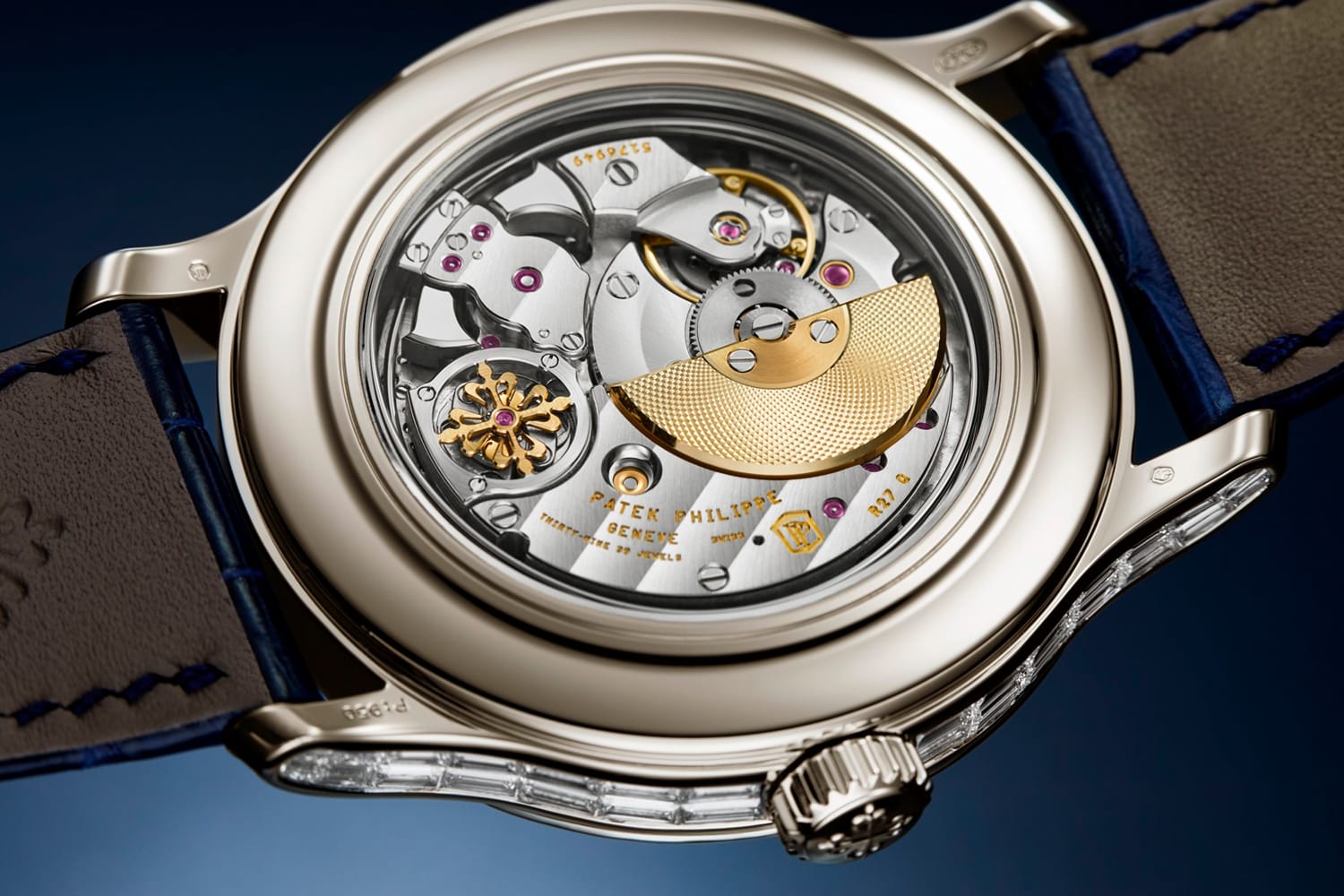 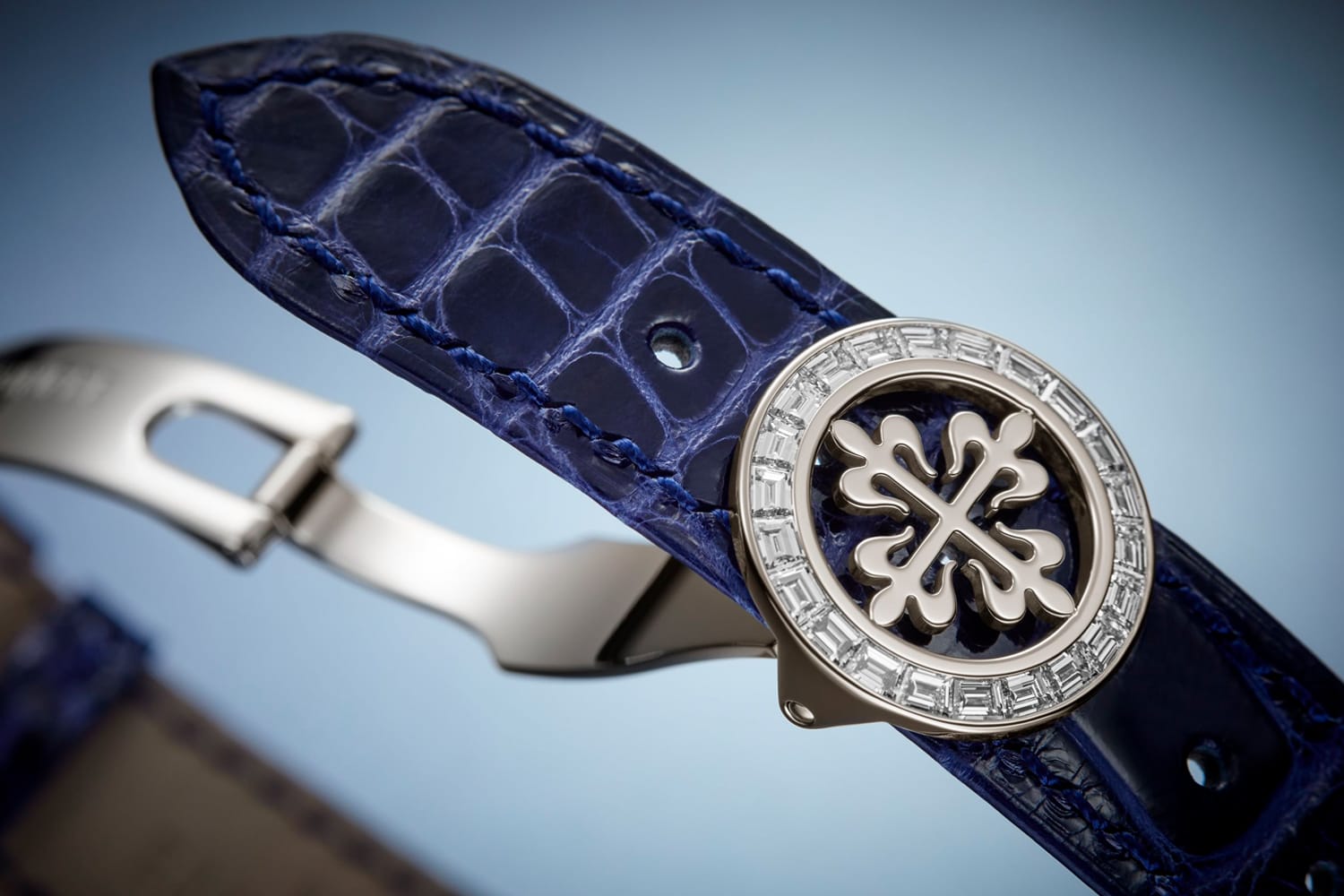 Patek Philippe did not leave precious stones out of this event as it also announced a stunning major complications 5374 minute repeater and perpetual calendar. Crafted in platinum, the 42mm case features 228 diamonds for a total of 11.62 ct. It also contains 13 (0.72 ct) baguette-cut sapphires as hour markers. This watch is equipped with a self-winding mechanical Caliber R 27 Q which has a minute repeater mechanism chiming on two “cathedral” gongs wrapped almost twice around the movement for a deep, rich sound. The price for this is available upon request.

To learn more on the complete range of new models for 2022, head over to Patek Philippe’s announcement site.