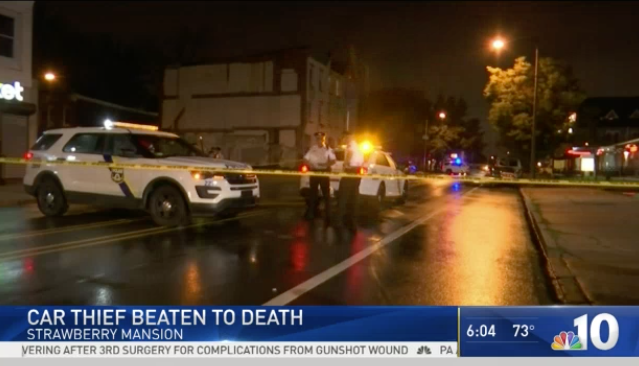 A man who stole a car with three children in the backseat was dragged from the vehicle by the kids’ father and beaten to death late Thursday night in Philadelphia, police say.

Authorities told local media that a 25-year-old woman parked her car at a pizza restaurant in the Strawberry Mansion neighborhood in the city’s north around 9:15 p.m.

She left the children in the backseat with the engine running as she went inside to talk to the father of two of the kids.

That’s when police say Eric Hood, 54, got into the car and sped off — but he quickly became stuck in traffic just half a block away.

The father ran after the car and dragged Hood from the front seat, police said.

“We’re being told that other males in the area helped the boyfriend with this physical altercation and a physical struggle ensued,” Chief Inspector Scott Small told NBC Philadelphia.

Hood was beaten unconscious and was later pronounced dead in a hospital.

The children, who were between 7 months and 5 years old, were not harmed.

The parents of the children, who have not been identified, have been questioned by police.

Authorities are also studying surveillance footage to track down other people involved in the incident.

Police did not respond to requests for comment on Saturday about whether charges would be filed, but district attorney Larry Krasner told the Philadelphia Inquirer newspaper it was too early to say.