Over the course of the past year-and-a-half, Prince Harry and Meghan Markle have gone through unimaginable change. The Duke and Duchess of Sussex made the difficult decision to take a step back from their positions as senior members of the British royal family in January 2020, then made the choice to move to America, settling in Montecito, CA, amidst a global pandemic. The months that followed included setting up their Archewell Foundation, starting projects with Netflix and Spotify, and moving forward on their philanthropic endeavors while using their platform to highlight humanitarian causes. It’s been a whirlwind journey, and it’s landed the couple on the cover of the 2021 Time 100 issue, with a gorgeous new photo taken in honor of the occasion.

The Duke and Duchess of Sussex posed for their first official magazine cover as a couple, captured by photographer Pari Dukovic. The image is simple, elegant, and puts Prince Harry and Meghan’s earnest expressions at its center. Of course, it’s due to the work they have done through their foundation and nonprofit partners, as well as their clear global reach that has lead them to earn this recognition. And their friend and frequent collaborator, World Central Kitchen founder José Andrés, articulated why the couple is among Time’s 100 most influential people of 2021. 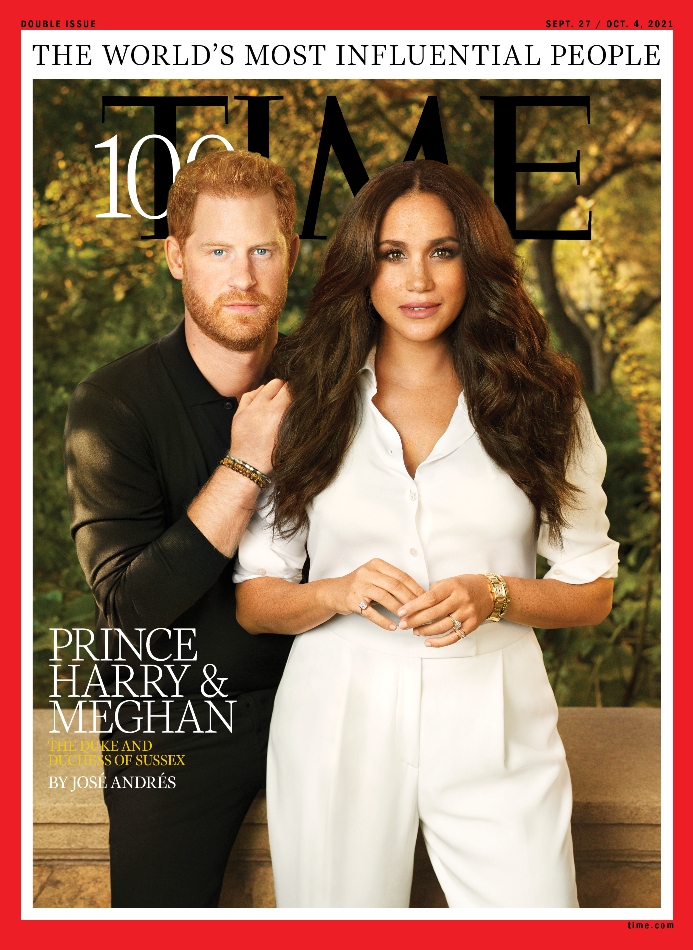 Citing the viral clip of Prince Harry ripping off his microphone during an interview while serving in the military, and Meghan’s long-standing convictions on the struggles faced by women and girls around the world, Andrés noted that this is a couple who has “been blessed through birth and talent and burned by fame. It would be much safer to enjoy their good fortune and stay silent. That’s not what Harry and Meghan do, or who they are.”

Moving forward into the latter few months of 2021, Prince Harry and Meghan seem poised to tackle new projects, raise their young kids — son Archie Harrison Mountbatten-Windsor and daughter Lilibet Diana Mountbatten-Windsor — and build their own empire. The couple already has a string of projects in the works, along with a personal memoir from Harry. It’s clear that Meghan and Harry have already left an indelible impact — now we’ll see how their influence changes and grows in the years to come.