Royalists are foaming at the mouth just waiting for Prince Harry and Meghan Markle’s Netflix docuseries to premiere. They are ready to criticize the Sussexes at every turn, but Princess Diana’s former butler Paul Burrell wants to be heard ahead of the drama.

He went to the thorn in the Sussexes’ side, Piers Morgan, to share his thoughts on what King Charles III should do about his son and daughter-in-law. “You take away the titles, I agree with you, you do,” Burrell said on Piers Morgan Uncensored. “They don’t want to be members of the royal family, so why should they trade on royal titles?”

Well, Paul, let’s go and talk about Prince Andrew first before Charles considers stripping Harry and Meghan’s royal titles. He’s brought far more shame to the palace than the Sussexes’ exit and his infractions have been swept under the rug. The couple is putting everything on the line to highlight the injustices done, particularly to women, with the current royal structure. And while Burrell does praise Harry for “protecting his family,” he feels like it’s a cash grab because they’ve partnered with Netflix.

He believes “the commercialism around it” wouldn’t be something that Diana would have appreciated because she “never took a penny from anyone else.” However, Harry realized that raising his family in a system embedded with institutional racism and misogyny wasn’t going to be a healthy environment for any of them. We have to think Diana would have understood why he left the royal structure and struck out on his own because his late mother was known for her heart, unlike some of the royal critics.

Before you go, click here to see more of Meghan Markle & Prince Harry’s milestones since leaving the royal family. 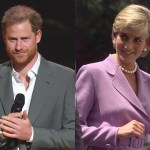