Put Down Your Book. It’s Time to Act Out.

When England began its first lockdown about a year ago, a production of “Coriolanus” at the Crucible in Sheffield locked down, too. Suddenly at liberty, the actress Alex Young hung up her Junius Brutus costume and returned to London. She panicked, she grieved and then on March 18, she opened Twitter. “Who’d be up for a Zoom/Skype play reading group?” she wrote. “Like a book group but we chose a script each time.”

More than 400 people liked the tweet; nearly 100 responded to her directly. A week later, the Corona Days Plays debuted, with a reading of the stage adaptation of “Shakespeare in Love.” This March, the group did the play again, “as a sort of anniversary read just to see how far we’ve come in terms of our Zoom prowess,” Young said, speaking on a video call.

Over the past year, as many theaters worldwide have remained closed, online play reading groups have arisen to fill that dramatic gap, with more or less prowess — on Zoom, on Skype, on the audio-only app Clubhouse. Some participants merely read their lines, scripts in hand, others act them out. Many clubs stick to Shakespeare and affiliated classics, but plenty range more widely, integrating contemporary plays, “Star Trek” episodes and film scripts.

Young described a recent reading of “Titanic,” the James Cameron movie. “There were many bathtubs and ice and excellence,” she said. 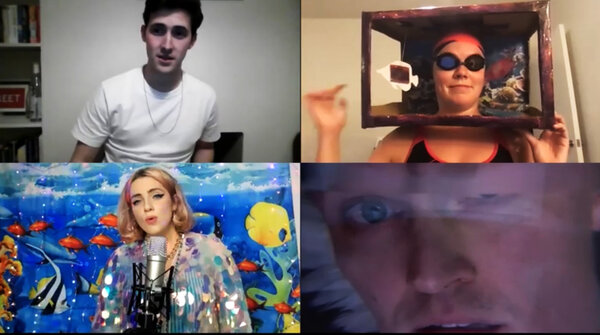 Theater has a long tradition of closet dramas, plays that were written to be read rather than staged. (Think Goethe’s “Faust” or Shelley’s “Prometheus Unbound.”) But now that’s pretty much every play — doubly so if you log on from your own wardrobe.

Amateur theatricals have a history, too. Nineteenth-century novels like “Mansfield Park” or “Jane Eyre” detail private friends-and-family performances. Public amateur dramatics became popular after the First World War, often as an outgrowth of a church, school, union or women’s organization.

They seem to have declined, in number and reputation, since the 1960s. It’s not particularly embarrassing to admit that you’re an amateur gardener or an amateur baker; outing yourself as an amateur actor invites mild ridicule. Or it used to.

Helen Nicholson, a professor at Royal Holloway, University of London, who researches amateur theater, has observed a new enthusiasm for do-it-yourself dramatics. “There’s been a massive turn toward amateur activity, amateur creativity,” she said. Reading plays in a group setting provides entertainment, community and perhaps a respite from lockdown life. “You get the opportunity to be someone else for a while, and follow a different kind of script,” Nicholson said. “It’s very powerful for people.”

These new groups have different ways of choosing which plays to read — by fiat, by suggestion, by Google poll, by working through Shakespeare’s first folio, in order or at random. Socially Distant Shakespeare, a group co-hosted by Brooke Brazer and Lori Mannette, finished the folio in late fall. “We’re going back and redoing it,” Brazer said.

Other groups have looked beyond the Elizabethans. Rebecca Brill, a freelance writer in Minneapolis, participates in a group with other recent M.F.A. graduates and friends. They have read Sarah Ruhl’s “In the Next Room,” Sarah DeLappe’s “The Wolves,” Clare Barron’s “Dance Nation,” plus two plays by Annie Baker. “It’s a lot more fun when the plays are funny,” she said, “so I try to choose contemporary plays that have a sense of humor.”

Casting has new rules, too. Many reading groups cast across gender and typically practice race-blind casting, save for roles and plays in which race and gender explicitly matter. Some troupes let participants request roles. Others keep detailed spreadsheets to maintain an even distribution of lead and minor roles. Corona Days Plays casts randomly, pulling names out of a bowl named “Sally Bowls”. Recently Sally acquired an assistant, “Camilla Parker Bowls.”

Haviva Avirom, a former stage manager, does the casting for her Los Angeles reading group. “We’re a group of mostly queer folks and one of the things we’re really enjoying is working in a company where literally anyone can play any part, regardless of gender or ability or size,” she wrote in an email. (Her email signature is a quotation from “A Midsummer Night’s Dream”: “We will meet and there we may rehearse, most obscenely and courageously.”)

About that ability part: If you see a lot of professional theater, you become inured to excellence, or at the very least, trained actors who have learned their lines and can play their characters with conviction. Amateur readings don’t have such advantages. They are swifter and sloppier, often entirely unrehearsed and sometimes not particularly good.

And yet, amateurism has its upsides. Daniel Krane, an SAT tutor and aspiring director, has organized two reading groups. Some participants have an acting background and some don’t. “People who don’t bring preconceptions to what good acting has to sound like can sometimes find something totally unexpected and delightful,” he said.

The form can be liberating even for trained actors. “I’ve felt freer as an actor then than ever before,” Young said. Still a funny thing has happened as lockdowns have continued — amateur readings have become a lot more professional. Costumes are a given now and props, too, like whisks repurposed as weapons. Some readers have become skilled in theatrical makeup and blood effects; others have created flour- and-water prosthetics. “It’s disgusting, in a way, but amazing,” Young said.

Ready for more amazement? Some professional theaters have intruded on the amateur act. Two dozen or so theaters have joined Plays at Home, which commissions playwrights to write and post plays that civilians can perform. The Pulitzer Prize winner Michael R. Jackson (“A Strange Loop”) offered “Trees on Broadway,” a play for 10 humans. (Description: “A young tree dreams of being on Broadway despite resistance from their family.”)

Theater Horizon in Norristown, Penn., has recruited local families to participate in Art Houses, which each month pairs them with professional playwrights and directors for one-performance-only Zoom shows. “Becky Bradbeer,” which followed the theater-loving title subject living with cerebral palsy, kicked off the effort; “The Peay Family,” a “life-affirming exploration of family, love, and art,” was the March edition.

“We realized that’s really how people fall in love with the arts, by participating in them,” Nell Bang-Jensen, Theater Horizon’s artistic director, said.

Foshay had never acted before and when Einspanier asked her what she thought her dramatic strengths were, Foshay answered, “Nothing.”

But once she managed her anxiety, she enjoyed her Zoom performance “in every way,” she said. Einspanier had fun, too. “Low stakes are nice,” she said.

Of course, not everyone feels that the stakes are low, particularly the emotional ones. Ellen Kushner, a writer, participates in an uncut Shakespeare reading group called All the Bard’s Words (All of Them). “I live for these Saturdays,” she said, “because I can just go big in a safe space.”

Young, who gave birth to a baby girl six months ago, hasn’t missed a week. She feels that it has brought her closer to why she fell in love with theater in the first place. “We do it as a gift to each other, as a beautiful offering,” she said.

Last winter, Michelle Navis, a freelance stage manager and venue manager, began a play reading group with her six housemates. They started with Maria Irene Fornés’s “Fefu and Her Friends,” then went to Chekhov’s “Uncle Vanya.” On Valentine’s Day, they read — and sang — “Mamma Mia!”

At the end of March, her pod and a few other friends met in Prospect Park in Brooklyn for their first outdoor reading. (If you were wondering when outdoor theater would return to New York: Right then.) Blankets were arranged in an irregular oval, oatmeal cookies were passed around. So was rosé, a little more surreptitiously. Someone had brought a stuffed shark. “It gets back at the core of what theater is about,” Navis said, “connecting with other people. And having a good time.”

The play, Agnes Borinsky’s “Ding Dong It’s the Ocean,” an episodic piece about a house party, took about an hour to read, including a brief intermission for more wine. After a year of minimal social interactions, everyone seemed relieved to have a script, a structure, a designated role. At the end there were applause and an improvised curtain call. Navis clapped, too, visibly relieved that it had gone so well.

“Now we can just hang out and we don’t have to read a play,” she said.