Review: A ‘Stonewall’ Opera Reflects the Diversity of Queer History

My favorite scene in the recent documentary “Maria by Callas” is when, after a seven-year absence, the world’s most famous diva returns to the Metropolitan Opera in 1965. A TV journalist visits the theater to interview young men who have been waiting hours — overnight, even — for tickets. And while none of them are explicitly gay, it’s no secret that they are.

There’s Dennis, with beaming eyes and extravagant phrasing, crowning Callas as “the greatest”; and Lex, dead serious in claiming that to miss her performance would be “a crime.” A third guy can’t stop smiling as he says she’ll receive a 30-minute standing ovation, even if he has to be the only one standing (though he’s sure he’ll have company).

Company, indeed. This heartwarming moment is a postcard from the past, preliberation gay men unintentionally announcing to the present: We have always been here. If you don’t think so, just read the hyperbolic diva worship in Walt Whitman’s poetry from the 19th century.

But opera, an art form that has existed for several hundred years, has only recently begun to reflect the lives of some of its most ardent fans with contemporary works that tell the stories of gay men, as well as the rest of the lesbian, bisexual and transgender community. The latest example is Iain Bell and Mark Campbell’s thin but often charming “Stonewall,” which premiered on Friday at the Rose Theater in a production by New York City Opera.

“Stonewall” — commissioned by City Opera to commemorate the 50th anniversary of the June 28, 1969, police raid and uprising that have come to signify the birth of the gay rights movement — is also the most recent installment in the company’s initiative to present an L.G.B.T.-themed production every year during Pride month. Last season was Charles Wuorinen’s bleakly strident “Brokeback Mountain”; before that, Peter Eotvos’s “Angels in America,” a streamlined and spare adaptation of the Tony Kushner play.

What could come next? Increasingly, there are options to choose from beyond the euphemism and tragedy in classics by, say, Britten or Berg. In the late-1990s, “Patience and Sarah,” by Paula M. Kimper and Wende Persons, brought a lesbian love story to the opera stage. And, in 2016, Gregory Spears and Greg Pierce’s wrenching “Fellow Travelers” homed in on a doomed romance caught up in the McCarthy-era “lavender scare.”

Like that opera, “Stonewall” aspires to tell a human story amid historical sweep. But it’s a nearly impossible undertaking because Stonewall, which was more of a nebulous moment than a self-conscious flash point, defies the simplification opera demands — not least of all because the bar catered to everyone on the queer spectrum, and they all deserve representation. 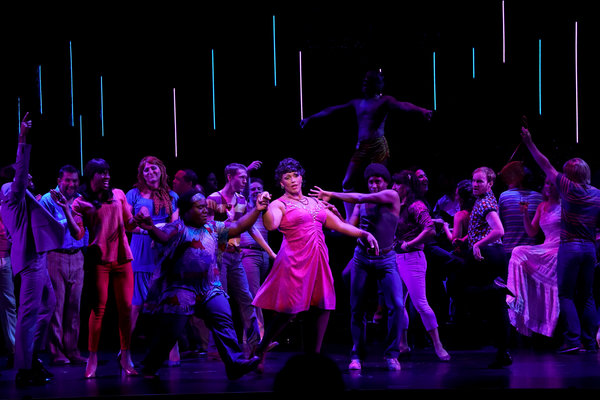 On that front, “Stonewall” is groundbreaking. It features what is billed as the first transgender role written for a transgender singer (Liz Bouk). And never have I seen such a diverse slate of characters as in the closing scene: a butch lesbian alongside a feminine one, alongside a drag queen, a gay Latino, a trans woman and a homeless young gay man. Inside the Stonewall Inn, white and brown bodies dance together as if in a world far removed from the bitter racial politics of the time.

But how to tell all of their stories within a single opera — one with a running time of less than 90 minutes? “Stonewall” tries, by giving the many principal singers brief arias that characterize them with pointedly telling details, but it ultimately doesn’t have the space to push any one role beyond mere archetype. And the baldfaced emotionality of Mr. Bell’s otherwise sophisticated score often abandons a human scale for something more like hagiography.

The opera opens with a spoken homophobic slur on the subway. (Riccardo Hernandez’s set consists of fluidly mobile walls covered in tin tile like a bar’s ceiling, decorated with thin strips of LED light that illuminate in different configurations for each scene.) The insult sparks a loud, dissonant chord that sets the opera in motion with a chugging, Sondheimian rhythm and restless momentum, vigorously conducted by Carolyn Kuan.

Maggie (Lisa Chavez), the butch lesbian, is on the receiving end of the slur; but she insults the man back and isn’t bothered, not with the evening she has planned: “Tonight downtown/I’m kissing a dozen girls,/And hope to take one home.” What follows is a long montage that recalls both the “Tonight” quintet from “West Side Story,” though a whole lot gayer, and the “I want” song trope of musical theater, with each major character briskly offering an introduction and aspiration.

Mr. Campbell’s plain-spoken and lucid libretto, smoothly conveyed through Leonard Foglia’s direction, touches not only on public harassment, but also blackmail, conversion therapy, discrimination and — admirably — the shady background of the Stonewall Inn, an unsanitary, Mafia-run bar that thrived on bribery.

Some singers appear too briefly. There’s barely any time, for example, to take in Brian James Myer’s buttery baritone voice beyond the passing scene of his character, a Dominican-American teacher named Carlos, getting fired from his Catholic school job for what the principal calls “your lifestyle.” Yet Mr. Bell’s music lingers a little too long on Renata (Jordan Weatherston Pitts), a drag queen whose introduction is underscored with exoticizing percussion that verges on problematic.

It doesn’t really matter, though, how well you get to know anyone, not once the tide of history sweeps into the Stonewall Inn. There the principal singers, whose characters are never really developed further, blend with the crowd as they dance to wonderfully fun jukebox songs — written by Mr. Bell and Mr. Campbell, and sung by Darlene Love — before being interrupted by the police, portrayed with simplistic villainy and led by the big-voiced tenor Marc Heller.

Even more simplistic, though, is how the opera represents the turning point of gay liberation: Ms. Chavez, mightily, sings “No!” at an officer as the riot erupts. (Is this growth for her? Not really, based on how defiantly she stood up against the man on the subway.) Then, for a moment, the opera becomes more like a dance, with the cinematic score accompanying a stage-wide battle, choreographed by Rick and Christian Sordelet, that begins chaotically but coalesces with the queer freedom fighters beating back the police as a single, massive force.

“Stonewall” ends shortly after, with a sunrise and an overly sunny finale that feels premature, as if this opera’s tale were just one chapter of a much bigger story. In real life, thankfully, it truly was.

Through June 28 at the Rose Theater, Manhattan; nycopera.com.

Joshua Barone is a senior staff editor on the Culture Desk, where he writes about classical music and other fields including dance, theater and visual art and architecture. @joshbarone • Facebook