Review: In ‘Enemy of the People,’ Water and Democracy Are Poisoned

Elections in Weston Springs are so simple. When a question comes before the townspeople, they confer in small groups, reach a consensus, press a button marked “X” or “O” and get the result, all within a minute. To a New Yorker, that sounds nice right about now.

But alas, Weston Springs, with its world-famous hot-water baths and grass-roots democracy, isn’t real. It’s the invented setting for “Enemy of the People,” Robert Icke’s enjoyable if gimmicky rewrite of the 1882 Ibsen drama originally called “En Folkefiende.” That play, structured traditionally in five acts, had 11 speaking roles and heaps of extras; Icke’s 95-minute version, which opened Wednesday night at the Park Avenue Armory, is a shiny one-woman show starring the formidable Ann Dowd as everyone.

Well, not quite everyone. For the occasion, the Armory’s 55,000-square-foot Drill Hall has been set up as a kind of laboratory of democracy, with a map of Weston Springs painted on the floor and 45 tables, seating two to five citizens each, deployed at different “addresses.” My pod of four was at Table 16, otherwise known as 16 Waivers Way.

So the audience plays the extras, each table getting one vote. As Dowd explains in a brief prologue, the results of the five “elections” that take place during the performance will affect the direction and even the content of the play, and help us answer its overriding question: “What does this community think?”

I’m not sure that goal was ever achieved. True, we voted on issues raised by the plot, which involves a public health crisis that butts up against an economic one when Professor Joan Stockman, chief scientific officer of the Weston baths, discovers lead in the water at levels even higher than the levels found in Flint, Mich., in 2015. (In the Ibsen version, the pollutant was apparently salmonella, which caused typhoid.) Surely the thing to do, Joan assumes, is to shut down the joint until new pipes can be laid, regardless of cost.

But the mayor — who, as it happens, is Joan’s older brother, Peter — doesn’t see it that way, or can’t afford to. The baths are not merely successful in themselves but have brought prosperity to the town as a whole. Since the complex was refurbished, tourism has increased ninefold, drawing people to its pools and potations while also creating an ancillary industry of high-end hotels and candle shops. When Peter learns that remediating the problem will take at least five years, and untold millions, he conveniently begins to suspect that the science is wrong. 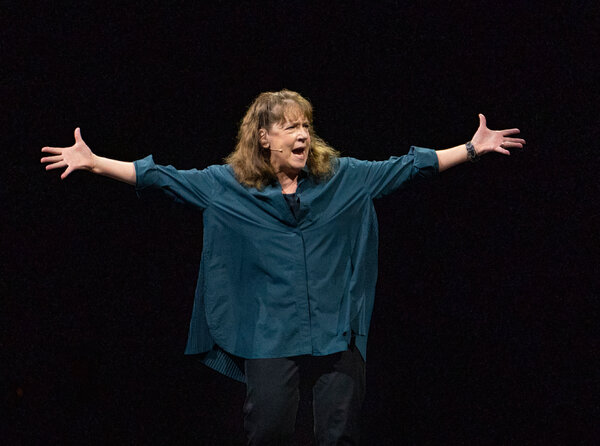 That both siblings are played by Dowd is a problem, and a plus. The plus is that Dowd is, as fans of “The Leftovers” and “The Handmaid’s Tale” know, an endlessly and effortlessly compelling actor, apparently unafraid of any extreme of human depravity. Her baseline naturalism — just looking at her face, taking in her posture, you believe that whomever she’s playing exists — allows for some terrifying flights into surreal psychology.

That’s the problem, too. Ibsen already loaded the deck in creating the contrasting siblings: Thomas — as Joan was originally known — was candid but excitable and arrogant; Peter, devious but phlegmatic and cordial. Because Dowd is playing both, and because she is a tiny figure on Hildegard Bechtler’s giant catwalk of a stage as it branches out amid the tables, she must push both characterizations to extremes.

So Peter, as projected live on jumbo screens, is no longer a worm but a snake, making arguments that (it seemed to me) were utterly transparent in their hypocrisy. And Joan, in return, is a mad fury instead of a mere idealist. As she bullies her brother, she undermines her positions by making them seem personal or even pathological. (She’s nasty to her husband, too, as Ibsen’s character never was to his wife.) Far from receiving the gratitude she expects for saving lives, she manages to make a mayor who is willing to sacrifice people for profit seem almost prudent and reasonable.

I suppose that isn’t so extreme. We have only to look at Flint — or at Covid-19 or the building collapse in Surfside, Fla. — to see how often, in real life, the advice of experts may be perverted by political or even democratic means. (Condominium boards, no less than municipal officials, are elected.) Biologists, virologists and engineers are just some of the modern-day scientists who become “enemies of the people” by trying to save them.

But neither Ibsen’s Joan nor Icke’s Thomas is able to stop at advancing a lifesaving crusade; both extend their arguments into weird, troubling territory. Enraged, Joan shouts that “molecules are not subject to majorities” and “facts are not a democracy” — viewpoints that soon merge into a profoundly elitist and even eugenicist worldview. In a properly organized society, she suggests, only experts would be allowed to vote. Or maybe only her.

In writing Joan this way, Icke, the director of the acclaimed Andrew Scott “Hamlet” in London and the excessively brutal “1984” on Broadway, puts an even heavier thumb on the scales than Ibsen, never a light touch, did. Clearly the attempt is to balance the arguments, or at least to balance our antipathy toward them. The voting likewise forces our hands, as the ballot issues are worded tendentiously. The last of them — “Who is the enemy of the people?” — requires you to choose between Peter and Joan, as if that were how democracy worked or was even, at least at Table 16, a question.

The voting concept is further trivialized by the doomy “quiz” music that plays as you deliberate, and, more fatally, by the outcome’s barely altering the experience of the play. Apparently, Dowd performs different scenes at two points, depending on the tally; on Wednesday, we met a local physician and the mayor’s public relations chief, whereas other audiences may spend time with Joan’s husband and a newspaper editor. But any one audience can only know the one sequence it sees, so the dramatic value of the gimmick is moot.

Which is not to say that “Enemy of the People” is too. Though it has stripped away most of the detail that Ibsen uses to dramatize the way civic crises arise from (and filter back down to) domestic ones, it offers a compensatory challenge. Icke asks us to dramatize these issues for ourselves, at our own tables. Communally, we are forced to consider: Is democracy the same as consensus? Is the ballot the best guarantor of good policy?

I ask because the four residents of 16 Waivers Way, split 2-2 on a key issue and unable to decide how to decide, ran out of time without hitting ‘X’ or ‘O.’ Ranked voting, anyone?