On an evening train back from the Hudson Valley last weekend, I overheard two drunken friends — one white, one Indian American — having a loud, expletive-ridden debate two rows behind me.

History was irrelevant, the white friend was saying. Between Cold Spring and Yonkers, they argued about police brutality, institutional racism and citizenship, but they kept circling back to the topic of reparations. “If my grandfather was a serial killer, why do I have to pay for his crimes?” he asked. He said history was being used against him. The past is the past — so why should he suffer?

That this experience followed a performance of James Ijames’s stunning new play, “The Most Spectacularly Lamentable Trial of Miz Martha Washington,” directed by Taylor Reynolds at the Hudson Valley Shakespeare Festival, was an event of stage-worthy irony. The theater gods certainly have a sense of humor.

And so does Ijames (“Fat Ham,” “TJ Loves Sally 4 Ever”), though his is laced with a brutal sense of cynicism. I say that as a compliment: What else could be more appropriate to the obscene joke that is this country’s treatment of its Black residents?

In “Miz Martha Washington,” George Washington is dead and his wife, Martha (played by Nance Williamson), seems about ready to follow him to the grave. Ann Dandridge (a sharp Britney Simpson) — her slave and also her half sister, who is unfortunately tangled up in Martha’s line of ancestry — tends to the former first lady while raising her own son, William (a perfectly jejune Tyler Fauntleroy).

Martha is weak and feverish, talking nonsense and having hallucinations while Ann and the rest of her slaves — the Washingtons held hundreds, historically — continue to cook her food, clean her floors, chop her wood and polish her silverware, as they’ve done her whole life. But now they’re antsy and less accommodating: In his will, Washington offered the slaves freedom upon his wife’s death.

In a series of hallucinations, her slaves appear as lawyers, prosecutors and historical figures who try to show her how accountable she is in a system of oppression. Her fever dreams include chats with Abigail Adams, Betsy Ross and Thomas Jefferson, all of them Black; a game show hosted by a Black King George and Queen Charlotte; and a “People’s Court”-style trial. She should just do the right thing and free her slaves while she’s still alive, but it’s hard to be ethical when you’re accustomed to a certain lifestyle.

“Miz Martha Washington” bears the signature of Ijames’s clever wit: He writes the slaves as more than docile stereotypes; these slaves have personality to spare, and they joke and sing with a threatening jocularity. You know how baring one’s teeth can be a sign of joy or hostility? Ijames does.

Two female slaves, Doll (Cyndii Johnson) and Priscilla (Claudia Logan), act as twin jesters in the play, clowning and gossiping at Martha’s expense — as when Priscilla acts out what she hopes will be Martha’s “death rattle,” a hilariously odd sound that falls somewhere between a groan and a screech. They don’t talk purely in the expected dialect of stage slaves, but in an anachronistic mix of that with modern Black American vernacular.

All of the elements of the production have a bit of this playful mash-up approach (which recalls the style of other great Black playwrights like George C. Wolfe, Adrienne Kennedy and Suzan-Lori Parks). In terms of plot, the play recalls, of all things, “A Christmas Carol,” as Martha is haunted by her wrongs. But “Miz Martha Washington” is never as procedural as that; scenes set in the real world are broken up by dance interludes with disco lights and by surreal fantasies like a reverse auction in which the slaves, posed as owners, examine and bid on Martha.

Even the costumes, by Hahnji Jang, are sportively eclectic, with clashing patterns and colors — along with additional anachronistic details, like hoop earrings and sneakers. Under Reynolds’s puckish direction, the tone, too, whips from exaggerated sitcom-style humor (hammy facial reactions, quick comedic beats) to poetic surrealism (a young slave boy’s prophetic monologue) to tragedy (accounts of abuse, sexual assault). 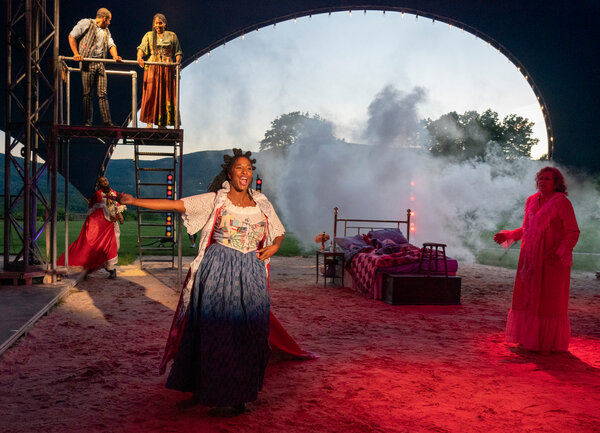 When the slaves sing and dance and drum around poor, sick Martha’s bed, it looks like a dark sacrificial ritual or an exorcism of America’s evils. And when one slave laughs, and the sound is joined by an offstage chorus of laughter from other slaves, the thunder is spirited at first but then quickly becomes unnerving. As Ijames notes in his script, “Laughter is a weapon.”

And yet Martha isn’t a meek, quivering pupil to the slaves’ lessons on the debts America owes to its Black people; Williamson pivots from pleas to commands, fear to rage, declaring herself America’s mother, a woman who “did right” by her slaves, and refusing to be spooked into more righteous behavior.

Behind the simple staging of Martha’s bed on a sandy patch of ground, an opening in the tent on the beautiful lawn of the Boscobel House and Gardens, in Garrison, N.Y., revealed a backdrop of mountains and a hazy blue sky. This view, which dimmed over time into the buzzing, uninterrupted darkness of the evening, for me recalled the ways our American mythos is tied to grand landscapes — “amber waves” and “purple mountain majesties” for white explorers and white landowners. All fitting for a show confronting questions about freedom, inheritance and birthright. (“Miz Martha Washington” is part of the festival’s 34th and final season before it moves to a new location.)

I couldn’t help but imagine how much greater the show would be on a big Broadway stage with all the fixings, so to speak. After all, Ijames’s revisionism works, in many ways, as the inverse to “Hamilton.” “Hamilton” uses its Black and brown actors to reclaim history as a story of hope for immigrants, minorities, the disenfranchised. It’s a rebranding of the American dream. “Miz Martha Washington” uses its Black actors to expose the blights of the American dream and the hypocrisies of our historical narratives.

And so the hilarious Brandon St. Clair is the obliging slave Davy as well as a very Black — and priceless — George Washington, resurrected from the dead. And another slave, Sucky Boy (Ralph Adriel Johnson), appears as a humorously tactless Black Thomas Jefferson.

Does the play have a happy, inspirational ending? Well, let me just say that despite Ijames’s antic fabrications, he is ultimately tethered to the tragedy that is America. And we all know how that story goes.

On the train after the show, the conversation between the two friends seemed to stretch on forever. When the white friend got off, after saying he had enjoyed the “discourse,” a fresh silence took over. Infuriated by the ignorant, racist statements I had been hearing, I walked over and spoke to the Indian American man, a lawyer named Ash.

“You’re totally right on everything,” I said. “I’m not sure you should bother.” He gave me a fist bump and said that he still wanted to try.

About halfway through the play, Priscilla says to Doll, “Hard work openin’ folks’ eyes,” to which Doll responds, “Huh … you can say that again.”

But are we all accountable for our fellow citizens who are, if not explicitly racist, at least complicit in the systems and institutions that degrade and oppress? Does Ijames consider his work educational, a corrective? I would wager not. History has taught us that even our most high-minded foundational ideals — “all men are created equal” — can be interpreted to a single group’s advantage or be a basis of manipulation. You can’t teach a person humanity if it’s a lesson they don’t want to learn.

In the fairy tale version of our country’s racial politics, we all learn about justice and skip happily toward the future. I, for one, am done with fairy tales as history — and patient explanations. Give me the harder truth of Ijames’s fantastical version any day.