Review: ‘Moulin Rouge! The Musical’ Offers a Party, and a Playlist, for the Ages

This one’s for the hedonists.

All you party people should know that the Al Hirschfeld Theater has been refurbished as an opulent pleasure palace, wherein decadence comes without hangovers. That’s where the euphoric “Moulin Rouge! The Musical” opened on Thursday night in a shower of fireworks, confetti and glittering fragments of what feels like every pop hit ever written.

Inspired by the 2001 Baz Luhrmann film and directed with wicked savvy by Alex Timbers, this “Moulin Rouge” is a cloud-surfing, natural high of a production. It has side effects, for sure, including the vertigo that comes from having your remembrance of songs past tickled silly and the temporary blockage of any allergies to jukebox musicals.

But for its plump, sleek two-and-a-half hours of stage time, “Moulin Rouge” — which stars a knockout Karen Olivo, with Aaron Tveit and Danny Burstein doing their best Broadway work to date — has the febrile energy you may associate with the wilder parties of your youth, when gaudy nights seemed to stretch into infinity.

Or rather, it’s like the memory of all those parties merged into one streamlined fantasy. The team behind “Moulin Rouge” — which includes the brilliant arranger and orchestrator Justin Levine and the choreographer Sonya Tayeh — know that familiar music opens the floodgates of recollection like few other stimuli.

Though it is set in fin de siècle Paris, “Moulin Rouge” uses as both its score and its lingua franca roughly 70 songs, most of them chart-toppers of the past several decades. And since the majority of them concern the extreme joys and sorrows of being in love (or lust), they are likely to have figured in the soundtrack of your own romantic history. These are numbers that many of us fell in love to, made love to and fell out of love to, and they’ve kept playing in our heads ever since. 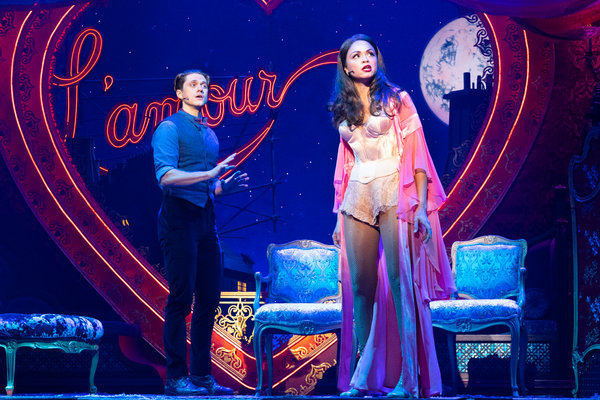 Mr. Luhrmann had the inspired notion that such music is to our age what the arias of grand opera were to an earlier time. The movie “Moulin Rouge” pumped a verismo-style, gaslight-era plot — a hybrid of “La Traviata” and “La Bohème” — full of melodic anachronisms like “Your Song,” “Lady Marmalade” and even the title number from “The Sound of Music.” 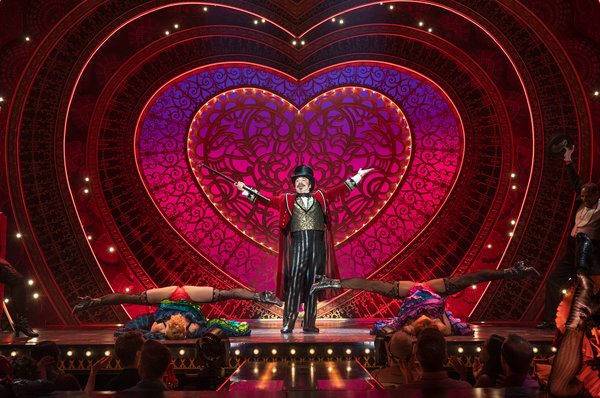 The stage version retains most of these but has added a whole lot more, many used only in snippets. (The characters here sometimes communicate in mash-up numbers through a giddy chain of “name-that-tune” lyrics.)

At the same time, Mr. Timbers’s production, which features a strategically clichéd book by John Logan, translates the shimmery illusions of cinema into the grit and greasepaint of live theater. It picks up on the outmoded idea of show people as close kin to panderers and prostitutes, emphasizing the transactional relationship between live entertainers and their audiences.

Thus when you enter the Hirschfeld you will immediately encounter variations on the idea of love for sale. Derek McLane’s dazzling nightclub set of the title — that’s the same Moulin Rouge associated with Toulouse-Lautrec, and yes, he’s a character here — is a gasp-inspiring nest of valentine hearts, cushioned nooks and outsize exotica, illumined in shades of pink and red by the lighting designer Justin Townsend.

Lissome men and women, wearing little more than corsets and stockings, stare down the audience. (A top-form Catherine Zuber has dressed the cast sumptuously, in clothes designed to ravish.) Men in top hats and tails, cigars clamped between their lips, assess the human flesh on offer. And a splendidly seedy master of ceremonies greets us with flattering insults.

That’s Harold Zidler, played with rouged cheeks, suspicious eyes and an all-embracing leer by a marvelous Mr. Burstein. “Welcome, you gorgeous collection of reprobates and rascals, artistes and arrivistes, soubrettes and sodomites,” he says. “No matter your sin, you are welcome here.”

In contrast, there’s our other host, who says he’s summoning a cherished chapter of his life for our delectation. That’s the open-faced, virginal Christian (Mr. Tveit), newly arrived in Paris from Lima, Ohio, who asks us to “think back” and “try to remember your first real love affair.”

The object of Christian’s adoration is Satine, a nightclub chanteuse and demimondaine, almost past her prime and riddled with consumption. On-screen, Nicole Kidman portrayed her as a gossamer-spun apparition. Ms. Olivo, in a performance that sends her into the constellation of great musical actresses, gives us a figure of palpable flesh, who deploys a coquette’s arsenal of wiles and illusions to conceal illness, desperation and a hard-lived past.

When Ms. Olivo’s Satine, which has acquired even greater depth and polish since I saw this show in Boston a year ago, sings “Diamonds Are Forever,” “Diamonds Are a Girl’s Best Friend,” “Material Girl” and “Single Ladies (Put a Ring on It)” — all in one number — she’s a delicious compound of artifice and ardor. Like the show itself, she skillfully walks a tightrope between archness and sincerity, sophistication and gee-whiz wonder, without ever stumbling.

The wide-eyed Mr. Tveit covers the “gee-whiz” part of the equation with appealing exuberance and a gleaming voice. He has been given two lively sidekicks — the Argentine tango dancer Santiago (the vibrant Ricky Rojas) and the painter and, uh, show-within-the-show director Toulouse-Lautrec (a charmingly melancholy Sahr Ngaujah).

As Christian’s romantic rival, the Duke of Monroth, Tam Mutu swaggers suavely and menacingly. He introduces himself to Satine by singing (wouldn’t you know) “Sympathy for the Devil.”

The stuff of radio-wallpaper has been repurposed here, but it’s never performed as karaoke throwaways. When Ms. Olivo sings the Katy Perry chart-topper “Firework” or Mr. Tveit does Adele’s “Rolling in the Deep,” it’s with an uncompromising, personal passion.

Mr. Rojas and a snarling Robyn Hurder lead the sensational Act II showstopper, an angry blend of Lady Gaga’s “Bad Romance” and Britney Spears’s “Toxic.” (Ms. Hurder is also part of the fab quartet of divas — along with Jacqueline B. Arnold, Holly James and Jeigh Madjus — who give torrid life to “Lady Marmalade.”)

When Mr. Burstein makes his jubilant entrance at the top of the show, you may find yourself thinking of another insinuating M.C., from another European nightclub, from another Broadway musical. I mean, of course, the immortal “Cabaret.”

In “Moulin Rouge,” life is beautiful, in a way reality never is. All is permitted, and forgiven, in the name of love. Bohemian poverty is exquisitely picturesque. Stardom is around the corner for the gifted and hungry. And even songs you thought you never wanted to hear again pulse with irresistible new sex appeal.

What this emporium of impure temptations is really selling is pure escapism. You may not believe in it all by the next morning. But I swear you’ll feel nothing like regret.

When you purchase a ticket for an independently reviewed play or musical through our site, we earn an affiliate commission.

Ben Brantley has been the co-chief theater critic since 1996, filing reviews regularly from London as well as New York. Before joining The Times in 1993, he was a staff writer for the New Yorker and Vanity Fair.