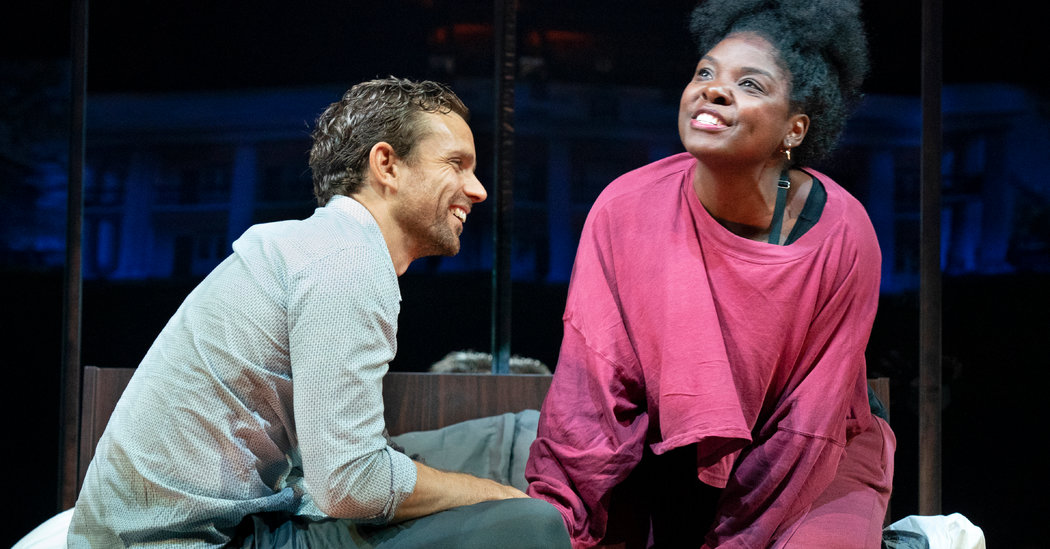 Though it’s mild, paradoxical and perhaps a bit prurient to say so, “Slave Play” is a happy surprise.

It’s mild because Jeremy O. Harris’s play, which opened at the Golden Theater on Sunday, is one of the best and most provocative new works to show up on Broadway in years.

It’s a paradox because what could be happy in a play about pain? A play so serious, so furious and so deeply engaged in the most intractable conflicts of American life that it became both a cause célèbre and a scandal before it opened?

But sex is more than titillation in “Slave Play”; it is the crucible in which Mr. Harris performs a thought experiment. If black people in intimate partnerships with white people felt safe to say how they needed to be seen, would their white partners be able and willing to comply? Or are black people forever condemned by the legacy of slavery to live “squarely in the blind spot” of their nonblack partners’ “myopia?”

Though the experiment is carried out in a complex format — one that blurs satire and minstrelsy and comedy and drama — this is not some avant-garde nonsense producing microscopic results. In focusing on three messed-up interracial partnerships, “Slave Play” has nothing less than the messed-up interracial partnership of our whole country in its sights.

If only our whole country could go on a weeklong retreat to explore these issues, as the three couples do. (Read on judiciously if you want to preserve the play’s surprises.) Their retreat, at a former plantation outside Richmond, Va., has been designed to help the black partners “process” their anhedonia — their inability to get pleasure from their white partners — through a series of exercises including, on Day 4, role play as slaves.

In that role play, Kaneisha (Joaquina Kalukango) takes on the persona of a “disgusting little bed wench” to “Massa Jim” — that is, her husband (Paul Alexander Nolan), putting on a Southern accent. Phillip (Sullivan Jones) portrays a cultured house slave who agrees to be dominated by his partner, Alana (Annie McNamara), playing the plantation’s neurotic mistress. Gary (Ato Blankson-Wood) casts himself as a field slave in charge of a white indentured servant played by his narcissistic boyfriend, Dustin (James Cusati-Moyer).

In the play’s first section, called “Work,” these three couples try to reconnect sexually in their antebellum alter egos (and in Dede Ayite’s witty costumes) while Mr. Harris and the play’s director, Robert O’Hara, press every outrageous button they can. (It’s just the beginning when Kaneisha twerks to Rihanna, begging Massa Jim to call her a “Negress.”) For some audience members — not to mention social media kibitzers — just seeing black characters take on reviled stereotypes may be too much to bear.

But the play’s ambition is built on this outrageous foundation. In the second part, called “Process,” the couples discuss the outcomes of their role play under the guidance of two psychologists — Teá (Chalia La Tour) and Patricia (Irene Sofia Lucio) — who developed the therapy. Here, Mr. Harris’s satire of academic gassiness and self-help psychobabble does double duty: It’s hilarious (even if a bit overdrawn) and yet illuminating. As the couples begin to pry ever more deeply into their troubles, we are the beneficiaries of their painful insights.

What we learn in lockstep with them is that the black subjects — Kaneisha, Phillip and Gary — are prized by their lovers despite their blackness instead of because of it. The role play, designed to flip that polarity, has forced the white partners to look at color and see it deeply, even at the risk of mortification.

This dynamic is pushed to a thrilling conclusion in the play’s third section, called “Exorcise,” in which one couple faces the fallout of their work. A brilliant little play in itself, “Exorcise” is as wrenching a portrait of moral gridlock as anything in Arthur Miller, as weirdly lyrical as Tennessee Williams and as potently heightened as Suzan-Lori Parks.

I wish I could see what Mr. O’Hara, who often directs his own coruscating plays, could do with those authors. (His staging of “A Raisin in the Sun” at the Williamstown Theater Festival this summer was revelatory.) His showmanship both leavens and deepens difficult material and was crucial in turning “Slave Play” into the event it was downtown.

Uptown, his staging has grown broader and funnier but no less trenchant in the 800-seat Golden than it was in a space one-quarter the size; the continuous embroidering of marvelous detail fills any gaps that might have opened in the expansion. (Watch Phillip take refuge under his hoodie when he gets overwhelmed, or Alana scramble after her notebook as if it might protect her from what she’s learning.) The returning cast — especially Mr. Cusati-Moyer as the boyfriend who pathetically insists he is not as white as he looks — has likewise amped up the emotional volume; they have a bigger house to bring down.

Their performances make that of the only new cast member — Ms. Kalukango — even more distinct and grave by comparison. As Kaneisha becomes the center of the play’s argument, you see her struggle to express herself playing out on her face before she has the words. When the words do come, they are all the more devastating.

Devastating and, for white people, or at any rate for me, painful. And why shouldn’t they be? The best plays aren’t just about empathizing with the oppressed; they’re also about accepting our connection to the oppressors. With asperity but also love, “Slave Play” lets us all see ourselves in the muddle that is race in America now. There’s even a giant mirrored wall in Clint Ramos’s set to make sure we do.

Such reflections are no longer common on Broadway. If “Slave Play” can bring them to a bigger audience — even an audience that is shocked or offended — it will be a happy surprise indeed. Shock and offense may be just the ticket now.

When you purchase a ticket for an independently reviewed play or musical through our site, we earn an affiliate commission.

Jesse Green is the co-chief theater critic. Before joining The Times in 2017, he was the theater critic for New York magazine and a contributing editor. He is the author of a novel, “O Beautiful,” and a memoir, “The Velveteen Father.” @JesseKGreen • Facebook

END_OF_DOCUMENT_TOKEN_TO_BE_REPLACED

END_OF_DOCUMENT_TOKEN_TO_BE_REPLACED
We and our partners use cookies on this site to improve our service, perform analytics, personalize advertising, measure advertising performance, and remember website preferences.Ok