Mauro Peter was a fourth-year music student in Munich when he received a call inviting him to audition for the Salzburg Festival’s Young Singers Project — a two-month training program held in Mozart’s birthplace every summer. The answer was yes, and Mr. Peter was one of 16 trainees in 2012.

The Swiss tenor’s career has taken off since then. Having made his Royal Opera debut as Tamino in Mozart’s “The Magic Flute” in 2017, he sang the role at last year’s Salzburg Festival. This year, he has a solo recital on one of the main Salzburg concert stages on Aug. 20.

The Young Singers Project is “a crash course in being a professional,” Mr. Peter said. He described the program as two “crazy months” of learning, rehearsing and performing, “so intense that you maybe only realized half a year later what you achieved.”

“It was the first time I experienced this kind of pace and pressure.”

If, as a singer, you survive the high-octane course, he added, “then you know that there is something there which you can work with.”

In the 11 years since it welcomed its first class, the Young Singers Project has hosted 157 young singers from 41 countries. (Included in the total are this year’s 13 young singers from 11 countries.) Trainees get their own apartments and, in their spare time, drive to the picturesque lakes on the outskirts of Salzburg.

Not that there is much time to be spared. Looking back on his own summer experience, Mr. Peter recalled: “You couldn’t count to 10, and the day was over. You fell into your bed and were exhausted. But it was a good thing.” 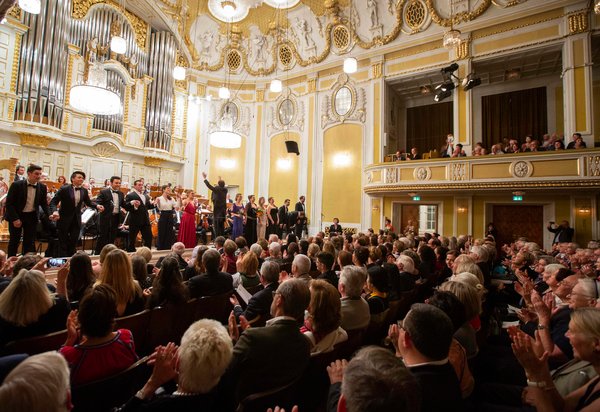 The schedule goes something like this: There are two or three lessons a day — singing, acting, language coaching — six days a week. Trainees learn new repertoire and rehearse and perform in the festival’s children’s opera. A lucky few participate in that season’s main opera production.

Ms. Ludwig made her Salzburg Festival debut in 1954 and performed with conductors including Leonard Bernstein and Herbert von Karajan before retiring in 1994. She said in an email that she started teaching the master classes roughly 10 years ago, because she “always loved” the festival and performed there extensively during her career.

She said participants were carefully chosen from all over the world, adding that “all have excellent singing technique: I only help them with their interpretation.”

“Most of all, I want to pass on what I learned from the great conductors,” she said.

The program is often an effective springboard for budding talents. Last year, the Belgian soprano Emma Posman found herself on the main stage — as Queen of the Night in Mozart’s “Magic Flute” — when the star of the show fell ill. As she later told Belgium’s VRT Radio, she was doing some Saturday afternoon shopping in Salzburg when she was summoned by the opera company, and she had only three hours to rehearse for that evening’s performance. She passed the test, and went on to sing the role at Berlin’s Komische Oper this year.

A 2015 alumna, Christina Gansch, made her debut at the Teatro alla Scala in Milan and at the San Francisco Opera. And the 2017 alumnus Vasilisa Berzhanskaya has gone on to perform title roles at the Deutsche Oper in Berlin.

Mr. Peter had a similar trajectory. The year after completing his summer program, he said, he was given three concerts on the big Salzburg stage, as well as a minor part in a matinee performance where he sang a short aria. For the first time in his career he received media attention, which he had to learn how to deal with.

Other young singers not lucky enough to get Salzburg Festival dates or bound onto major world stages join an opera company ensemble, or become a freelancer and do what many budding singers do: give as many recitals as possible, write to talent agencies seeking to be signed on and audition a lot.

What makes it tricky nowadays is that opera is a crowded field, Ms. Ludwig said.

“After World War II, there were only German singers in Germany,” she said. She learned singing from her mother, made her performing debut at age 18 at the Frankfurt Opera and joined the company that same year.

“Today, singers come from all over the world,” she noted. “That is why it is so much more difficult.”

Mr. Peter said the Salzburg program was not only an opportunity for artistic improvement, but also a chance to learn how to handle other aspects of a singing career — such as how to cope with competition.

During his program, he recalled, he was one of four young singers to be cast for a minor part in that summer’s production of “The Magic Flute.” Some fellow students were happy for him and said they looked forward to the show; others had a harder time. Mr. Peter said he realized that to move forward in the profession, he had to figure out how to deal with competition. It was important “not to be bitter about it,” he said, and “not look left and right at who’s getting what,” because missing out on a part “happens to everyone, regardless of what stage” of their careers they are in.

Even for those young singers for whom opportunities come quick and fast, the profession is tough, he said.

“In the end, you have to step up and be on stage and rock the thing and perform,” he said. “If you go into the business and expect a lot of help, that’s a bit too naïve. You can expect some help, but you have to do a lot yourself.”