Sara Leland, Ballerina of Passion and Abandon, Dies at 79

Sara Leland, a principal dancer with New York City Ballet who was entrusted with staging George Balanchine’s ballets worldwide even during her performing career, and who went on to became a beloved ballet master with the company, died on Nov. 28 in Westwood, N.J. She was 79.

The cause of her death, in a hospital, was congestive heart failure, her niece, Mary-Sue O’Donnell, said.

Ms. Leland, who was known to friends and colleagues by her birth name, Sally, was a young dancer with the Joffrey Ballet in New York when Balanchine, the ballet master in chief of City Ballet, saw her dance in a class and invited her to join his company.

In 1960, her first year with City Ballet, she was given a principal role in “Les Biches,” a new ballet by Francisco Moncion; she was promoted to soloist three years later and began to perform principal parts in a wide range of ballets, including Balanchine’s “Agon,” Symphony in C” and “A Midsummer Night’s Dream”; Jerome Robbins’s “Interplay”; and Frederick Ashton’s “Illuminations.”

Balanchine created a role for her in the “Emeralds” section of his full-length “Jewels” (1967) and in the short-lived “PAMTGG,” based on a commercial jingle for Pan American World Airways (1971). Robbins created roles for her in “Dances at a Gathering” (1969) and “Goldberg Variations” (1971). Her ability to rapidly absorb and remember choreographic sequences led Robbins to ask her to assist him at rehearsals, and they worked together closely during the creation of both those ballets.

Ms. Leland was promoted to principal dancer in 1972, just before City Ballet’s Stravinsky Festival, which opened with “Lost Sonata,” a pas de deux created by Balanchine for Ms. Leland and John Clifford. That same evening she performed the second movement with Edward Villella in the premiere of Balanchine’s “Symphony in Three Movements,” a ballet with which she would be associated throughout her career, and which she later taught to generations of City Ballet dancers. 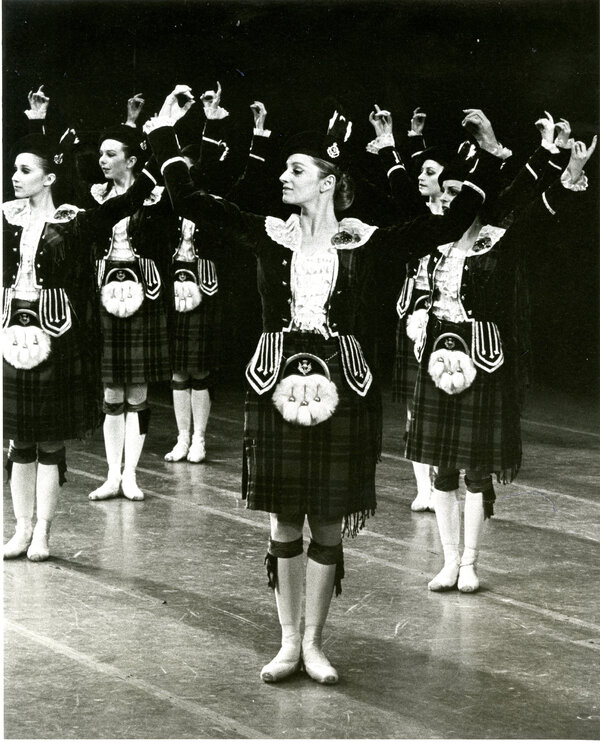 “Sally was a quick learner, and Balanchine really struggled with ‘Symphony’ with regard to tempos, so he gave Sally a lot of steps to show the corps de ballet,” Barbara Horgan, Balanchine’s longtime assistant, said.

Those steps stayed with Ms. Leland. “When I first staged ‘Symphony,’ I remember writing down the complicated counts from Sally, who had it all in her head,” said Christine Redpath, a repertory director at City Ballet. “I still remember her abandoned, quicksilver dancing in that work.”

Balanchine went on to choreograph roles for Ms. Leland in “Union Jack” (1976) and “Vienna Waltzes” (1977), and her steely technique and versatility allowed her to perform in an exceptionally wide range of the company’s repertory, including abstract ballets like Balanchine’s “Serenade” and “Agon”; romantic, expressive pieces like “La Valse” and “Davidsbündlertänze”; and conventional story ballets like “The Nutcracker” (as Dewdrop and the Sugar Plum Fairy) and “Don Quixote” (as Dulcinea).

“She was fun to watch because you didn’t have to hold your breath,” Ms. Horgan said. “She was so strong that she could take risks — but they weren’t risks for her. Some dancers are the same in everything, but she wasn’t.”

Ms. Leland began to stage works by Balanchine and Robbins in the mid-1970s, while still performing. She traveled to Amsterdam, Havana and Copenhagen to teach their ballets as well as working on them with companies in the U.S., including the Joffrey Ballet, Dance Theater of Harlem and the Boston Ballet. She was appointed an assistant ballet master with the company in 1981, two years before retiring from the stage.

“I’m watching Mr. Balanchine as much and as closely as possible these days,” she said in a 1982 interview with The Christian Science Monitor. “I treasure every minute of every rehearsal that he conducts. I’m trying to learn his ballets so accurately that I will never forget them and can stage them in the future exactly as he intended.”

Sally Harrington was born on Aug. 2, 1941, in Melrose, Mass., the second child of Ruth (Gibbons) Harrington and Leland Kitteridge Harrington, known as Hago, a former player for the Boston Bruins of the National Hockey League. She later adopted the stage name Sara Leland.

An older sister, Leeta, was born with spina bifida, and a doctor suggested she take up ballet as physical therapy. The family lived near the school of E. Virginia Williams, a noted teacher who admired Balanchine’s work and had studied his teaching methods. Ms. Leland went along with her sister to study there.

Her talent was immediately apparent, and she began to train intensively with Ms. Williams, who in 1958 founded the New England Civic Ballet, the forerunner of the Boston Ballet. Ms. Leland’s mother and Ms. Williams became close friends, and Ruth Harrington ran the company’s front desk, took dancers into the family home and made costumes for the troupe.

Robert Joffrey saw Ms. Leland perform with the company in 1959 and invited her to join the Joffrey Ballet. On vacation in Boston the next year, she attended ballet classes with Ms. Williams and was spotted by Balanchine, who was an artistic adviser to the New England Ballet.

“Balanchine adored Sally,” said Richard Tanner, a former ballet master at City Ballet. “She was such an unusual dancer, with such freedom of movement and lack of inhibition. She danced really big, and he loved that. He liked her personality, too, everything about her.”

Soon after Ms. Leland began to take on rehearsal duties, Balanchine asked her to coach the principal ballerina roles in his ballets. Her unusual ability to retain the choreography of all parts of a ballet, and to teach it, meant that she could work on more than 30 works in the repertory. She also frequently staged Balanchine’s works abroad, notably “Jewels” at the Mariinsky Theater in St. Petersburg, Russia, in 1998.

Ms. Leland married Arthur Kevorkian in 1975; they divorced in 1993. In later years Ms. Leland, a keen gardener, lived in New City, N.Y. Ms. O’Donnell, her niece, is her only survivor.

Wendy Whelan, the associate artistic director of City Ballet, said that Ms. Leland made an indelible impression on several generations of dancers.

“She was bigger than life; she had this giant, wide smile and so many things that I imagined a Balanchine dancer should exude when I joined the company,” Ms. Whelan said. “Passion, freedom, individuality — she was all that. When she taught, it was always ‘More! Bigger! Go for it!’ She embodied all the qualities that we tried to put into the dancing.”