Savion Glover, Listening to the Sound of His Own Searching

NEWARK — “What does the sound look like that you see when you are listening?”

This is how Savion Glover, the master tap dancer, talks about tap. Late last week, he was at Newark Symphony Hall here, in his hometown, preparing a new show — it runs July 2-7 at the Joyce Theater in Manhattan, his first appearance there since 2014 — and his post-rehearsal explanations kept coming out like Zen meditations: “Do you hear what you see? Or do you see what you hear?”

Mr. Glover, 45, has been saying things like this for decades. Usually, it’s to help audiences respond to his dance as music, an effect he achieves more in directly in performance.

Consider his appearance at the Blue Note Jazz Club in Greenwich Village last week, a kind of gig he does periodically. What you could see there was Mr. Glover on a small, amplified wooden stage, accompanied by a saxophonist and a drummer.

His bearded face, framed by dreadlocks, is a little more gaunt than it once was. His body and how he moves it have grown leaner. Palms up or floating heavenward, he could look like a man in prayer. Crouched, arms swinging, he could resemble a dancer from a West African tradition. Often, his movement looked like a hazy memory of dancing, or a ghost.

But what you could hear was the opposite of hazy. Mr. Glover has developed a sound unlike anyone else’s. It’s not only that his power, speed and articulation are unsurpassed, his rhythms both trustworthy and surprising. His sound is somehow bigger, deeper. Its intensity cuts into you, implacably.

Mr. Glover’s focus is intense, too, but as he improvises, he seems to tune into different grooves, different snatches of old songs, some of which he sings. He cracks jokes. The overall impression is of an artist totally at home in his art, which makes sense for someone who has been performing in public for 35 years, acclaimed for most of that time as the greatest ever in his field. And yet, most remarkably, the sound of Savion Glover is the sound of someone still searching. 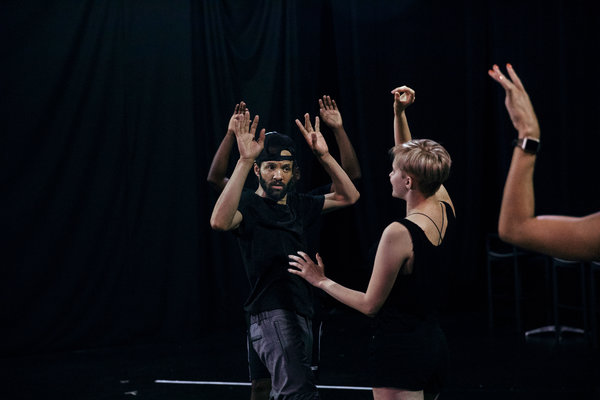 “There’s always new rules to establish, a new understanding for others to get hip to,” he said in Newark. “I don’t want to finish here, to find it here on Earth. I want to find it when I can no longer communicate it to you.”

“There’s obviously something going on in my hearing,” he said at another point. “I don’t hear the same as everyone else, and I want to pay more attention to that — not just in my musicality, but I might as well translate it to my sense of existing.”

His new show for the Joyce, “Lady5 @ Savion Glover’s BaRoQUe’BLaK TaP café,” addresses this broader sense of how he hears. “It’s about how we only know what we see,” he said, “until we hear something that we’ve never heard before.”

The setup, accordingly, is quite different from the one at the Blue Note. “It’s for a different community,” Mr. Glover said, “which means a different ear.” The dancers wear costumes that represent, perhaps, the masks of social convention. “Once we realize we don’t need these masks,” he said, “we can just be ourselves, and, dance-wise, everything changes.”

This theme of artifice and authenticity is an abiding one for Mr. Glover. One of the first pieces of group choreography he ever made, at 18, was called “The Real Deal.” The desire to draw a distinction between what’s fake and what’s real ran through his Tony Award-winning choreography for the 1996 Broadway show “Bring in da Noise, Bring in da Funk,” his contributions to Spike Lee’s 2000 film “Bamboozled” and his Tony-nominated choreography for the 2016 Broadway musical “Shuffle Along”

This time, the music is all recorded: an eclectic mix encompassing Bach, Astor Piazzolla, and 1970s jams by Quincy Jones and Stevie Wonder, as well as more recent tracks by Lorde, Bjork and the spoken-word poet Jae Nichelle. Mr. Glover taps, as does his longtime sidekick Marshall Davis Jr. But as in his 2007 show “Invitation to a Dancer,” the men often play backup to a small ensemble of four women.

These women, for the most part, do not tap. They strike haughty poses and sexual attitudes. They emote. What to call this style? Jazz? Contemporary? “Don’t call it anything,” Mr. Glover said. “It’s just energy. It’s just body language.”

As with most aspects of Mr. Glover’s art, though, this body language has roots in his past, in his childhood, starting when he was 10, already starring on Broadway in “The Tap Dance Kid.”

The story that Mr. Glover has most often told about that past is what happened next: how he came under the influence of a grandfatherly generation of African-American tap dancers, like Jimmy Slyde and Lon Chaney, and their middle-aged inheritor, Gregory Hines. The tap style of these men, who called him the Sponge for his precocious interest and ability, is what he’s always presented as the real deal.

But the Sponge wasn’t soaking up only their influence. One of his co-stars in “The Tap Dance Kid” was Hinton Battle, a Broadway triple threat with ballet training. Mr. Battle was friends with Gregg Burge, a Juilliard-trained performer and Broadway dancer who later choreographed the music video for Michael Jackson’s “Bad,” and, with Michael Peters, a Broadway choreographer best known for his work on seminal Jackson videos, “Beat It” and “Thriller.”

Jimmy Slyde and the hoofers like him — “those are my guys,” Mr. Glover said, “my Jesus.” But Mr. Burge and Mr. Peters are also “distant mentors.” Their style, “because it didn’t have a chance to get labeled,” he said, isn’t as remembered and influential as Mr. Glover thinks it should be.

To him, they represent the scene he found in the early 1980s at the Hines-Hatchett studio, which later became Broadway Dance Center. “Everybody was going there,” Mr. Glover remembered: “Brooke Shields, Jody Watley.”

“I was inspired by studio dancers you don’t know,” he continued. “4:30 Intermediate jazz class: I was in the doorway, watching.”

Those memories inform the new Joyce show. In the program, Mr. Glover writes of an imaginary conversation with Mr. Burge, who died in 1998, and gives an “overseen by” credit to Mr. Peters, who died in 1994.

If, to some people, the look of that style might seem an odd match for the sound of his tapping, that’s the kind of risk he likes to take. “His general approach has been consistent,” said Mr. Davis, who has appeared in most of Mr. Glover’s productions of the past 20 years. “It’s: ‘This is what I want to express. Let’s see if they get it.’”

Ultimately, though, Mr. Glover said that what people think is not really his concern. Neither are such public matters as the general state of tap today.

“I have a lot of rap songs about bad tap dancers that maybe they’ll release when I’m dead, but I had to remove myself from all that,” he said. “I had to realize that I’m me. I’m different from any other tap dance in the world.”

“I have the same mission I always had,” Mr. Glover said. “To do me, express me. I found out that I can make you cry and laugh and do things that you don’t know why you’re doing them, all through tap dance. That’s what I’m here to do. Tap dance is why I exist.” 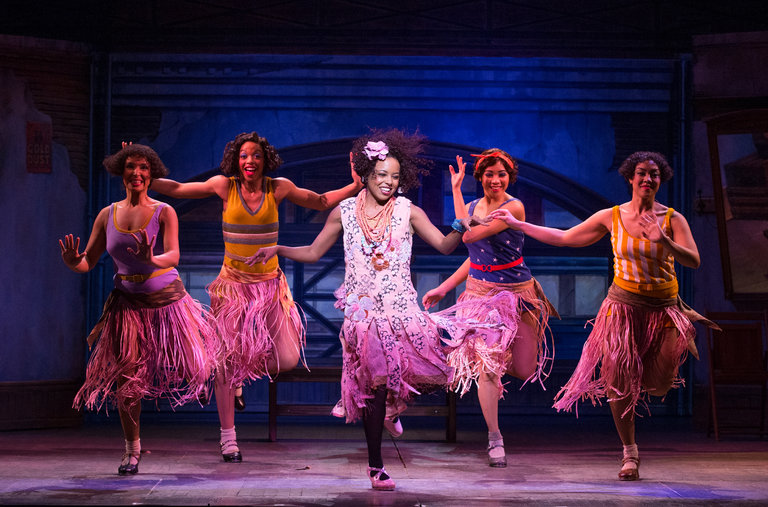 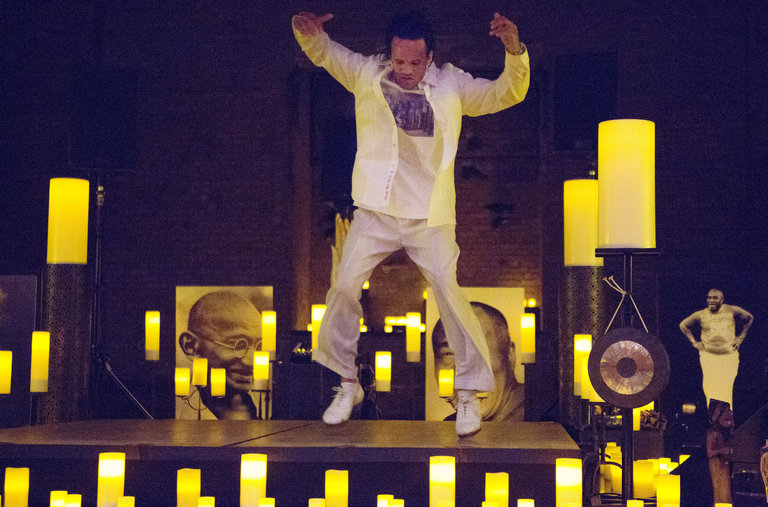 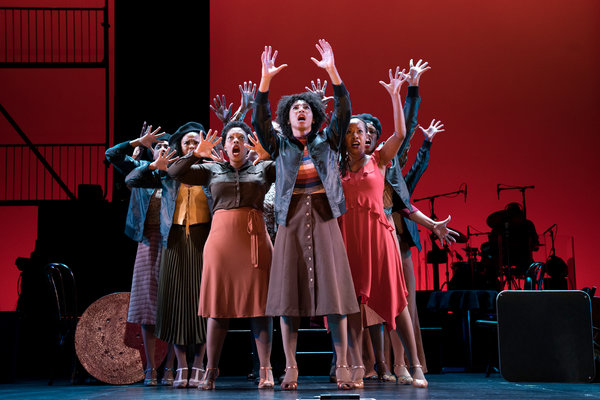