In 2017 Beyoncé spoke with Solange for Interview magazine, and popped a couple of questions about her sister’s tastes. First she asked for her sibling’s favorite Diana Ross film, then a choice some readers might have found more puzzling: “‘No Me Queda Mas’ or ‘I Could Fall in Love’”?

“This is so unfair!” Solange protested, before answering: “No Me Queda Mas.”

Neither sister needed to mention the name of the song’s singer. Growing up in Houston in the 1990s, everyone knew of Selena, the Tejano star whose death at age 23 in 1995 catapulted her to national fame.

In the quarter century since her death, Selena’s legend has continued to grow, fed by reissues and remixes, numerous books, a film starring Jennifer Lopez and now a bio-series from Netflix, which debuts Friday. A regular theme of these projects is that the young star was struck down while recording her first full English-language album, right on the verge of crossover success. While not altogether wrong, that interpretation misses an essential fact about Selena’s career: She had been crossing stylistic, linguistic, ethnic and geographical boundaries since she began singing professionally at age 9, constantly expanding both her music and her audiences. And everything she sang came from her own background and experience. 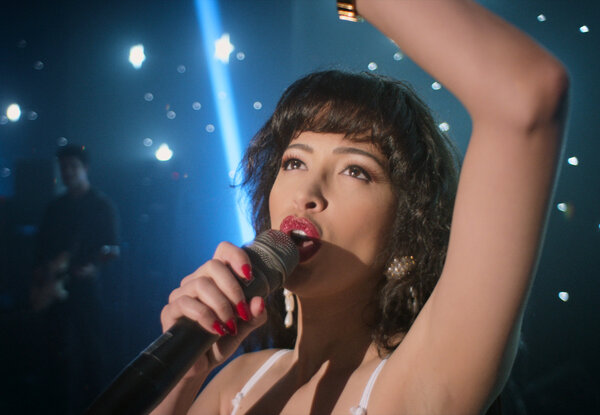 Selena’s first hits were in Spanish, but her first language was English and her musical tastes ranged from traditional ranchera, the Mexican equivalent of country-western, to whatever was currently on the radio. A 1987 performance at Houston’s Miller Outdoor Theatre shows her dressed in jeans and a denim jacket, singing Jody Watley’s “Looking for a New Love” — a No. 1 R&B hit that year, and one with particular significance for the overwhelmingly Latino crowd, which enthusiastically cheers its bilingual kiss-off line, “Hasta la vista, baby.” Selena struts across the stage, busting out Paula Abdul dance moves and negotiating the melody with effortless power, then announces “a song by Janet Jackson’s brother” and segues into “Beat It.”

Barely 16 years old, Selena was breaking out as the new queen of the Tejano scene. The previous month she had been named best female vocalist at the Tejano Music Awards — an honor she would win for nine of the next 10 years — and if her records focused on the light Spanish-language show-band pop typical of that genre, her live shows demonstrated an uncanny ability to assimilate any style that attracted her. Whether she was singing hot R&B, bouncy cumbia, rootsy accordion conjunto music or her own genre-busting fusions, she looked and sounded completely at home.

Selena combined virtuosic skills with a kind of magical ordinariness. You can see it in a live performance of one of her defining songs, “Como la Flor.” She begins by emphasizing the heartache of the lyric, slowly drawing out the lines about a lover leaving, her face contorted in pain. Then, in an instant, she drops the mask, smiling and even laughing, reminding the audience they are all watching and enjoying this together — and then she again is in agony, her fist beating her chest, murmuring the final words, “como me duele,” “how it hurts me.”

The triple transformation takes barely a minute, and although she repeated it night after night, both personas feel authentic: She is tearing herself apart for us and also is one of us, entertained by the spectacle. Then her hips sway as the band shifts to a cumbia, the crowd cheers and relaxes, and the show goes on.

That mix of brilliance and normalcy created a special bond between Selena and her fans. No matter how dazzling or famous she became, she always seemed approachable and candid, and easily laughed at herself. It helped that she was part of a family band: Her father, Abraham Quintanilla, had been part of a popular Tejano vocal group in the early 1960s and raised his children to continue and amplify his dream. Selena’s older siblings formed a solid rhythm section, sister Suzette on drums and brother A.B. on bass, and when she married the band’s guitarist, a Van Halen-style shredder named Chris Perez, they moved into a house next door to her parents.

That sense of family grounded Selena’s most spectacular performances in a reassuring warmth and stability, and as she explored a growing range of styles, it kept her sound impressively cohesive. A.B. Quintanilla arranged and produced all the recordings and wrote almost all the songs, often in partnership with the backing vocalist Pete Astudillo, and they rarely brought in any outside musicians.

The 1990 album “Ven Conmigo” marked Selena’s first significant crossover, hitting not only in Texas but in Mexico. The key was her R&B-flavored version of cumbia, the Afro-Colombian style that had become popular with dancers on both sides of the border. Selena prepared for the new market by working hard on her Spanish — in early interviews she responded to Spanish questions in English, but by the 1990s she was comfortably fluent, though she still joked about occasional mistakes.

She also proved she could sing the deepest form of ranchera and make it her own. Her brother and Astudillo wrote a ballad of female anger, “¿Qué Creias?” (What Did You Think?), which she delivered with the ferocious passion of a classic Mexican diva — and in concert she would call for a volunteer from the audience and spit the lyrics in his face, paying tribute to tradition while comically asserting her independence from it.

That ability to find a unifying, personal approach to widely disparate styles was Selena’s special genius. Where other artists might seem to be torn or shifting between cultures, all her explorations felt like natural extensions of herself. She was genuinely an R&B singer, genuinely a Mexican diva, genuinely the little daughter of a close family and genuinely a dazzling pop star. As she reached new audiences, first in Texas, then Mexico, then the broader Latin markets of Miami and South America, and finally the United States’s Anglo mainstream, it felt less like she was “crossing over” than inviting them to join her.

Selena’s death was in jarring contrast to her life. Shot by her close friend and fan club president in a moment of madness, she became a tragic legend. Dramatic retellings of her story inevitably build toward that ending, showing her bravely struggling against a domineering father, pervasive sexism and the prejudices of both Anglos and Mexicans, cut down before she could realize her dream. Selena undoubtedly had to surmount a lot of barriers, but that legend is the opposite of what she chose to portray every time she stepped onstage: a young woman joyfully in control of her music and her life.