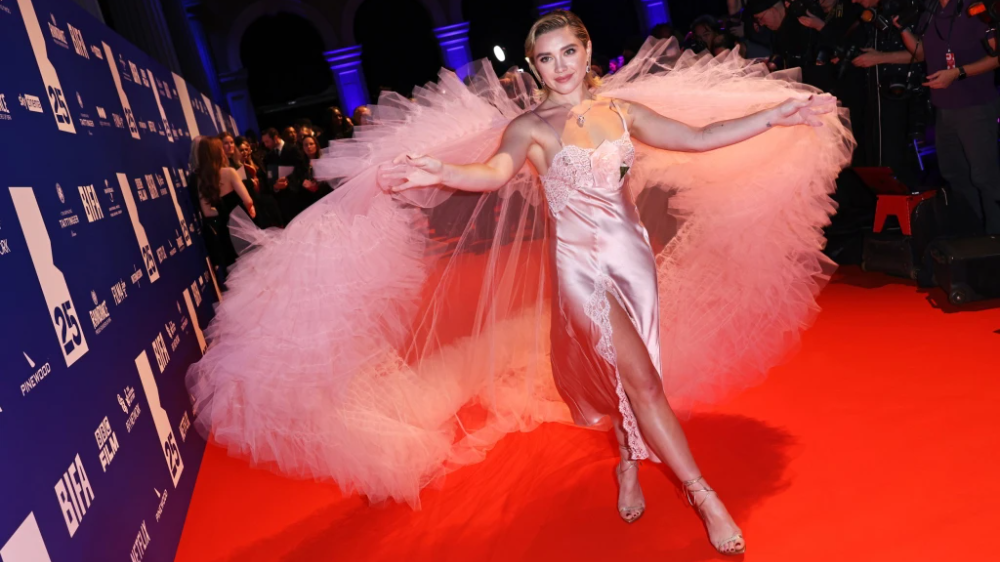 We cannot get over Florence Pugh in this dress.

The actress was the belle of the ball as she walked the carpet at the 25th British Independent Film Awards, donning a stunning pink gown.

Florence, 26, made sure to show her elegant ensemble off for cameras, whipping the mesh train around and wafting it in the air.

Her gorgeous satin frock featured a low-cut neckline and floral detailing, as well as a thigh-high split.

She styled the show-stopper with a pair of gold heels and opted for a glamorous make-up look, complete with a soft eye and nude lip.

The Don’t Worry Darling actress’ appearance at the ceremony shows she’s well and truly moved on from her alleged beef with director Olivia Wilde, after promo for their film was overshadowed by rumours of an on-set feud.

Now, though, Miss Flo is thriving, as she stood tall on the red carpet and ensured her outfit grabbed headlines.

Also in attendance was Jenna Coleman, who went for a slightly more demure look as she wore a black gown.

The 36-year-old Victoria star went for an off-the-shoulder ruffled number with a semi-sheer skirt.

She completed her look with complementary stilettos and wore a strong smokey eye.

As for accessories, Jenna wore a pair of dazzling emerald and diamond.

Sex Education’s Amy Lou Wood also went for a suit, styling a cream jacket with a bow tie but keeping that feminine edge with high heels and a black clutch.

Britain’s Got Talent judge Alesha Dixon, 44, opted for a quirky number, as her black fitted dress seemed plain from the front, but featured unusual chain detailing down the back.

Black Panther actress Letitia Wright, 29, put in an appearance too, showing off her edgy fashion sense in a black dress with white crimped cuffs.

As for the awards, it was an exciting night for Florence, who was recognised for her lead performance in The Wonder, while Paul Mescal was celebrated for his supporting performance in God’s Creatures.

The cast of Emily received nods while the likes of Aftersun, Living, and Blue Jean were recognised for best British independent film.

The coveted Richard Harris award for outstanding contribution by an actor to British film went to Samantha Morton.