The Democratic Debate Gave Us Some Amazing Gifs — Here Are The Best, You Are Welcome 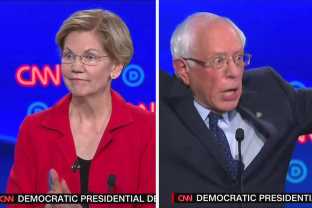 “I wrote the damn bill”

Here’s what brought that on:

CNN moderator Jake Tapper: “Let’s start the debate with the number one issue for Democratic voters, health care. Senator Sanders, let’s start with you. You support Medicare-for-All, which would eventually take private health insurance away from more than 150 million Americans in exchange for government-sponsored health care for everyone. Congressman Delaney just referred to it as bad policy and previously he’s called the idea political suicide that will just get President Trump reelected. What do you say to Congressman Delaney?

Here’s what Buttigieg was saying: “This is the exact same conversation we have been having when I was in high school. I was a junior when the Columbine shooting happened.”

The exchange (about prescription drug prices):

John Hickenlooper: “So again, I think if we’re going to force Americans to make these radical changes, they’re not going to go along. Throw your hands up, but you haven’t…”

Warren rubbing her hands with glee

Here’s what brought that on:

CNN moderator Don Lemon: “Congressman Delaney. I’m coming to you now. Your estimated net worth is more than $65 million. That would make you subject to Senator Warren’s proposed wealth tax on the assets of the richest 75,000 households, or so, in the United States. Do you think Senator Warren’s wealth tax is a fair way to fund child care and education?

Delaney: “I think wealthy Americans have to pay more.”

(These last two are more video clips than gifs but you get the idea.)

“I wrote the damn bill”

Sanders: “They will be better because Medicare-for-All is comprehensive and covers all health care needs for senior citizens it will finally include dental care, hearing aids, and eyeglasses. Second of all…”

Full quote: “If you think any of this wonkiness is going to deal with this dark psychic force of the collectivized hatred that this president is bringing up in this country, then I’m afraid that the Democrats are going to see some very dark days.”

END_OF_DOCUMENT_TOKEN_TO_BE_REPLACED

END_OF_DOCUMENT_TOKEN_TO_BE_REPLACED
We and our partners use cookies on this site to improve our service, perform analytics, personalize advertising, measure advertising performance, and remember website preferences.Ok