‘The Falcon and the Winter Soldier’ Series Finale Recap: ’Tis of Thee

What was the best part of “The Falcon and the Winter Soldier”? Was it the action? The first episode kicked off with an aerial fight sequence exciting enough to be in a Marvel movie; and throughout the series, even when the plot was less than gripping, the director Kari Skogland and the stunt and special effects teams could pep up almost any episode with some high-flying, hard-punching, shield-flinging thrills.

The series finale, “One World, One People,” leans hard on the big action set pieces. More than half of the episode is dedicated to a multistage, multilocation battle between the heroes and the violent anti-nationalist organization the Flag Smashers. Sam — now clad in his new hybrid Captain America/Falcon costume, complete with both shield and wings — performs phenomenal feats of strength and agility as he battles the kickboxing mercenary Batroc, chases a helicopter and saves a truck full of hostages from plunging to the ground.

Meanwhile, Bucky, Sharon Carter and John Walker all cross paths out in the street, fighting directly against Karli Morgenthau and the Smashers. Before the melee is done — ending with Batroc and Morgenthau shot dead by Sharon — we see motorcycle stunts, martial arts, and superpowered combat.

So, yes … if you tuned into “The Falcon and the Winter Soldier” each week to see big-budget super-heroics, then you should have been pretty pleased by this finale. But if you watched this show for the characters? You may have been disappointed.

As I mentioned in last week’s recap, the writers left themselves a lot of work to do in their final chapter. This show about Captain America’s legacy ultimately had five or six major characters, each with an arc to complete in a way-too-crowded finale: Sam, Bucky, Walker, Sharon, Morgenthau and Baron Zemo.

Bucky’s story is perhaps the cleanest and most heartening. He gets to deliver a touching warning to Morgenthau, letting her know she will be haunted by the people she kills, no matter the reason. After the fighting is done, he completes his list of amends, finally confessing to his neighbor Yori Nakajima (Ken Takemoto) that the Winter Soldier killed his son. In a sweet montage of life in Louisiana at the end of the episode, Bucky seems at peace, playing with Sam’s nephews. It’s nice!

But it’s harder to know what to make of the endings for Zemo, Morgenthau and especially Sharon. The Baron’s presence in this episode is almost an afterthought as he remotely engineers the bombing of a surviving cadre of Flag Smashers. As for Morgenthau, even before she is killed she has begun to lose the faith of her people, who question her bloodthirsty win-at-all-costs mentality and her apparent need for martyrdom.

Neither Zemo nor Morgenthau has a particularly strong finish, in large part because of the big twist in this episode: revealing that Sharon has been the series’s real villain, pulling the strings as the Power Broker. This doesn’t come out of nowhere. Sharon seemed pretty shady when she first appeared back in Episode 3, and that never really changed — all the way up to this finale’s mid-credits scene, which showed her worming her way back into the U.S. intelligence services with plans to exploit her new access for profit.

Still, given that she wasn’t prominently featured throughout “The Falcon and the Winter Soldier,” it is an odd choice to center on Sharon at the end. It makes the show’s entire thematic and narrative focus feel misdirected. 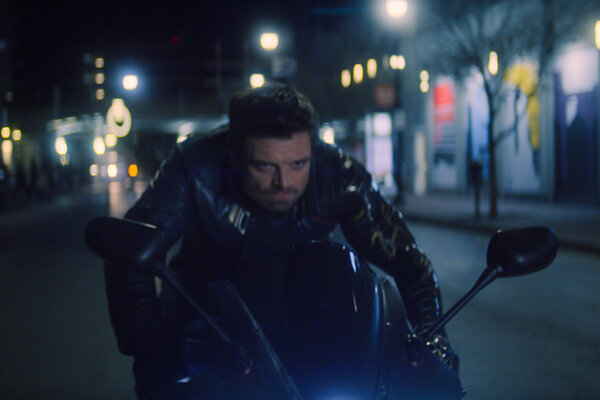 The episode’s credited writers, Malcolm Spellman and Josef Sawyer, are on firmer ground with their two Captains: Walker, who gets rebranded at the end of this episode as U.S. Agent (just as that character did in the comics), and Sam, who shakes off his doubts and critics and figures out what kind of Captain America he wants to be.

Walker is such a fascinating character: a fiercely honed and doggedly faithful warrior, nurturing resentment toward the superpowered people who get all the headlines. When the Contessa Valentina Allegra de Fontaine reappears in this episode, promising to put him to work representing the interests of the powerful in a complicated post-Blip world, that’s a fitting fate for a man so committed to a “might makes right” worldview that he dosed himself with a dangerous, destabilizing serum.

In fact, Walker’s lingering problems probably should’ve been recognized more in this finale. But the character works well here (as he did in the comics) as a contrast to Captain America. Again, this episode too quickly resolves some of the series’s thorniest themes about who should and shouldn’t try to represent American ideals. After all his soul-searching, Sam finally claims the Captain America title with a tidy speech, in which he says he is choosing to fight for his home and for the rights of the marginalized.

But Sam’s off-the-cuff manifesto is very much in the spirit of Captain America, who from the comic book pages to the multiplex has nearly always been both a champion of the underdog and a force for fairness. Having a new Captain America with no super powers — who can tell the world, “The only power I have is that I believe we can do better” — makes sense.

There were a lot of different paths “The Falcon and the Winter Soldier” could’ve followed to get this point where Sam finally claims the shield. I think the show meandered too much, shoehorning in too many side characters and too much Marvel mythology. Nevertheless, it was a rush in Episode 1 to see the Falcon zooming through the air. In the end, it is even more satisfying to see the new Captain America doing the same.

I appreciated the callbacks to earlier episodes, as when one of the spectators calls Sam “the Black Falcon” and another says, “I thought Captain America was on the moon.” Some of this show’s best moments involved the nonheroes, trying to live their lives while supernatural phenomena and property-demolishing super fights happened around them. It made me think that a TV version of Kurt Busiek and Alex Ross’s “superheroes as seen by ordinary folks” comic book series, “Marvels,” would work really well.

We got another look this week at that amazing Captain America museum exhibit, which included a section dedicated to Isaiah Bradley’s super-soldier service. This exhibit was first featured in the Captain America movies. It has always impressed me with how much it looks like a real museum installation, complete with video-screens and memorabilia. One of the great pleasures of the Marvel Cinematic Universe — including this TV version — is the level of fine detail, indicating that no expense was spared.

One last thought on this largely enjoyable if scattershot show: Unlike the Marvel movies, “The Falcon and the Winter Soldier” ends with so many unresolved and newly generated story lines that I have no idea what Marvel Studios is going to do with all this material — if anything. Will we ever see the U.S. Agent again? What about Sharon? Captain America? Some of the Marvel movies and TV shows in development could use these characters. (“Hawkeye” and “Secret Invasion” on the small screen, for example, or “Black Widow” and “Black Panther II” on the big one). But it seems equally likely that some of these threads will be left dangling forever. After this show and “WandaVision,” I’m not seeing the same sense of direction that distinguished the earlier M.C.U. projects. Here’s hoping the future series and films bring some clarity.