The Llama as Therapist

STOCKDALE, Tex. — The 300-pound llamas strolled quietly through the corridors of the nursing home, lowering their heads to be petted by residents in wheelchairs and pausing patiently as staffers took selfies.

“Did you get a bath today?” one resident, Jean Wyatt, asked Tic, a white male llama owned by Zoe Rutledge. (He had.)

Zoe, a high school sophomore, was there with her parents, Jeff and Carol Rutledge, who keep 13 llamas and alpacas at their home here in Stockdale, an exurb of San Antonio. Three of their herd have passed the qualifying exam necessary to become registered therapy llamas, a test that involves being touched by strangers and remaining impassive when people nearby start arguing. 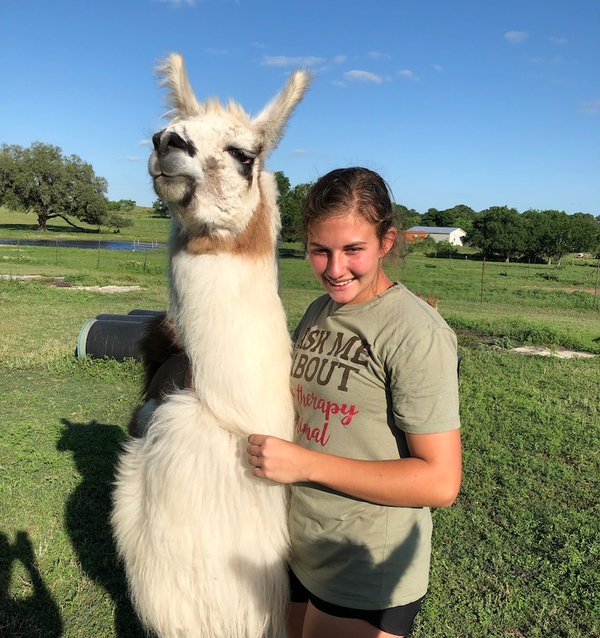 “You look for the ones that are mellow and calm,” said Zoe, explaining how her family chose the animals they take to assisted living facilities, nursing and veterans’ homes, rehabilitation centers and walk-a-thons for groups like the Down Syndrome Association of South Texas.

Llamas and alpacas — popular in TV commercials, as toys and on all manner of apparel — are simultaneously growing more common in therapeutic settings. While a handful are registered with Pet Partners, a national nonprofit clearinghouse for therapy animals, most are simply family farm pets whose owners take them to hospitals, college campuses and senior centers to ease people’s stress.

The novelty factor is a big part of the appeal, along with the creatures’ big-eyed, empathetic gaze. Among the animals that biologists refer to as charismatic megafauna — tigers, elephants, giant pandas and the like — llamas, which are not endangered, are among the few that people can safely hug.

“For some people, dogs are a little too much, or they’ve had a bad experience with them,” said Niki Kuklenski, a longtime llama breeder in Bellingham, Wash., who was one of the first to use the animals for therapeutic purposes. She said that her llamas, especially a female named Flight, “will read people. So when she goes into a setting where someone’s really animated and excited to see her, she’ll put her head down for a hug.”

But if someone seems apprehensive, “Flight will stand stock still,” Ms. Kuklenski said. “She is very cool.”

At Pet Partners, 94 percent of the registered therapy animals are dogs, but there are 20 llamas and alpacas in the mix, said Elisabeth Van Every, a spokeswoman for the group. (Most are llamas, which are much larger than alpacas and typically far friendlier to humans.) People who register their animals are covered under Pet Partners’ insurance for the duration of their therapy visits, and must abide by strict rules about health, grooming and working conditions. No animal may work more than two hours a day, and handlers must be aware of any signs of fatigue or annoyance.

Llama owners will tell you that their pets have a sixth sense about people who are needy, ill or frail. Carol Rutledge says that her therapy llama, whose name is Knock, will walk voluntarily to the bedside of a hospice patient and stand in silence while the patient reaches for him. “It wrenches at your heart,” she said. “It’s taken me several visits to be able to get through it without getting emotional.”

Mona Sams, an occupational therapist in Roanoke, Va., has eight llamas and five alpacas at her practice, which serves children with autism and other disorders, as well as adults with developmental disabilities. One patient is a girl with severe cerebral palsy and seizures who comes twice a week. “I have one llama,” — named Woolly — “who literally sits there with her for a whole hour, face to face,” Ms. Sams said. “She calls Woolly her ‘counselor,’ and she will spend the first part of the hour telling Woolly what difficulties she’s had, and he just sits beside her for that entire time.”

Hal Herzog, an anthrozoologist and professor emeritus of psychology at Western Carolina University, said that such results are not surprising, though they do not prove the efficacy of animal-assisted therapy. He says there’s a big mismatch between what the public believes — or wants to believe — about the effectiveness of therapy animals and what scientific studies show.

In Ms. Sams’s llama study, for example, he said, the children who got the standard therapy were doing “boring stuff” compared with the children who got to play with llamas. “I have no objection to that llama study, if it makes the kids feel better for a time, but I wouldn’t call it therapy,” said Dr. Herzog, author of the animal ethics book “Some We Love, Some We Hate, Some We Eat.”

He also pointed out that many people who research the human-animal bond are what he calls “true believers,” eager to validate the positive influence of pets and emotional support animals. “As an animal lover myself, I really wanted to believe it too,” Dr. Herzog said, adding that his research led him to a different conclusion.

Llama therapy is certainly not for everyone. While llamas are gentle creatures that seldom spit at humans, some people find their large stature intimidating or get spooked at seeing livestock indoors. On the flip side, some llamas aren’t cut out for the job: The two notorious runaway llamas that escaped onto a highway near Phoenix in 2015 had bolted from a visit to an assisted-living residence.

When two of the Rutledge family’s three therapy llamas — Tic and Knock — arrived at the Stockdale Residence and Rehabilitation Center for a regular visit, Bill Smallwood, a resident who is disabled from a motorcycle accident, accepted a small brush from Zoe and began grooming her llama. Mr. Smallwood is nonverbal, she said, but when the llamas are there, he will murmur and make word-like noises.

This summer, for a science competition for 4-H Club, Zoe compared the blood pressure readings of three of the nursing home’s residents, including Mr. Smallwood and Ms. Wyatt, before and after the llamas visited. Her hypothesis proved correct: Most of the time, their blood pressure was lower after the llamas left, and, observationally, they seemed happier.

Bobbie West, the nursing home’s activities director, said she kept it secret when the llamas were scheduled to visit, lest staff and residents get too excited. “They love the llamas,” she said. “One lady, she can be in the foulest of moods, and when the llamas come, she just gets a whole new aura to her.”