The T List: Five Things We Recommend This Week

Welcome to the T List, a newsletter from the editors of T Magazine. Each week, we’re sharing things we’re eating, wearing, listening to or coveting now. Sign up here to find us in your inbox every Wednesday. And you can always reach us at [email protected]. 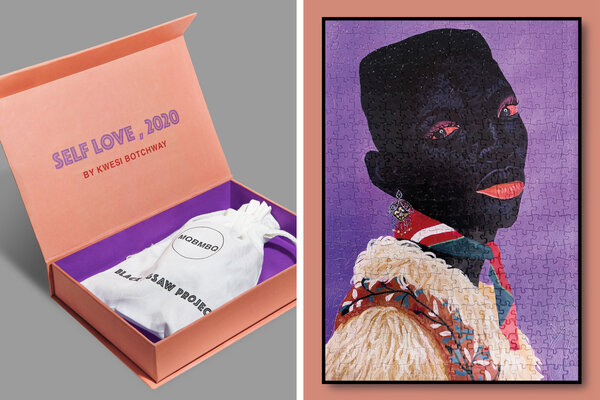 For the fourth installment of My Queer Blackness, My Black Queerness (MQBMBQ), an ongoing visual exploration into the experiences of queer Black people around the world that encompasses a photo project, film screenings and an artist’s residency, its founder and primary curator, Jordan Anderson, chose a new medium: the puzzle. The Black Jigsaw Project, sponsored by Gucci, comprises a pair of puzzles that, when assembled, each depict an original artwork, made exclusively for MQBMBQ, that foregrounds the lives and identities of Black queer people. In the Philadelphia-based illustrator Ggggrimes’s “Our Home,” four figures adorned in vibrant clothing from Gucci’s resort 2021 collection, titled Epilogue, unwind in their apartment, itself aglow with color and warmth. Meanwhile, the Ghanaian painter Kwesi Botchway’s “Self Love” features a portrait of a young Black man, set against a violet background, as he gazes directly at the viewer with self-assurance and style, his eyelids swept with a fluorescent pink shadow, his scarf and shearling vest also from Gucci’s new line. “If I’d seen these types of puzzles when I was younger, I would’ve felt more comfortable,” says Anderson. “I feel like I would’ve been more queer.” Each limited-edition puzzle contains 384 pieces and is encased in a box designed by the artist Cary Fagan. All proceeds go to Movimento Identita Trans, Italy’s oldest trans-centered organization. About $200 each, mqbmbq.com.

A Sleep Retreat Among the Canyons

I was a poor sleeper to begin with, but ever since the start of the pandemic, working from home has meant less exercise, poor eating habits and too much screen time, all of which have contributed to getting even fewer hours of rest. When I learned that the Amangiri — the five-star luxury hotel located on 600 acres in Canyon Point, Utah — was hosting a sleep retreat this February, I perked up. Held over the course of four days, the experience starts with a pre-arrival assessment conducted by the sleep specialist Michael Breus that determines your personalized schedule for the rest of your stay. (According to Breus, there are four different animal types that symbolize one’s sleeping patterns: bears, who follow the sun and have little problem sleeping; lions, who are early risers and go-getters; wolves, who are more nocturnally inclined and also creative; and dolphins, who are brilliant but restless sleepers.) Activities range from morning yoga sessions to cold plunges to lectures on how to enjoy alcohol and caffeine without affecting one’s sleep, and on how to create better sleeping habits for the future. Set against southern Utah’s ocher-colored canyon landscape, the package includes full board and access to the hotel’s other amenities (such as the spa and fitness center) and promises to be a restful way to start the new year. Reservations can be made at (435) 675-3999 or aman.com.

A Loewe Collaboration Inspired by ‘My Neighbor Totoro’

Jonathan Anderson’s deep love of craft is newly evident with each passing fashion season — Loewe, the Spanish fashion house where he is creative director, regularly collaborates with weavers, embroiderers and leather workers. With the brand’s latest capsule collection, though, Anderson celebrates a different sort of art form: animation. Concocted in collaboration with Studio Ghibli (the Tokyo-based outfit founded in 1985 by the directors Hayao Miyazaki and Isao Takahata with the producer Toshio Suzuki) and dedicated to one of its most beloved films, in which a pair of sisters in postwar Japan commune with fantastical creatures in the woods near their house, Loewe x “My Neighbor Totoro” is a 66-piece offering that includes bags and other accessories, sweats, shoes, T-shirts and one buttery leather biker jacket, many of them rendered in cartoon-bright hues and embellished with figures and lush imagery from the 1988 movie. Forest scenes cover totes and tops, and Totoro himself appears on a number of items, including the popular Puzzle and Hammock handbag styles. There are various reminders that this is a marriage of skill sets — some of the flourishes were hand-painted, while others were realized via a leather intarsia or tapestry technique — but the overall effect is one of whimsy. For Anderson, who remembers watching “My Neighbor Totoro” on VHS with his parents, the collection as a whole, which is launching Jan. 8, is also a reminder, ever apt in our modern world, of the importance of nature and adventure.

As the poet Bill Berkson once wrote, Martha Diamond, who is known for her indelible New York cityscapes rendered in thick, gestural brush strokes and bold, contrasting colors, “builds edifices that bring citified chaos into focus as character, condensing the rush and stabilizing it as an emblem.” Next week sees the opening of a new show, at Magenta Plains gallery on Manhattan’s Lower East Side, that explores the depths of Diamond’s affinity for these structures. Culled from pieces completed in the ’80s, a pivotal decade for the artist that culminated in her work appearing in the 1989 Whitney Biennial, the six large-scale oil paintings to go on view share a palette of muted grays, midnight blues, glowing yellows and burnt scarlets — shades encountered on a lonely stroll at night, or thanks to a peek through the blinds after dark. (A number of preparatory studies on Masonite will also be on display.) Having lived and worked on the Bowery since 1969, Diamond indeed draws on scenes from her own walks through the city, depicting grids of buttery windows (as in “Moonlight/City View #2,” 1981) or stacks of green fence screens on identical balconies (“Untitled 11,” 1987). She also paints with her nondominant hand, which gives her canvases their intimate, figurative quality. They brood, slump and occasionally menace, and yet they’re also solitary and anonymous — in other words, the works themselves are true city dwellers. More than a particular place, says Olivia Smith, the gallery’s director, they “represent a memory of something that we all recognize.” For this New Yorker, whose city has felt all but unrecognizable these past 10 months, it’s a welcomed remembrance. “Martha Diamond: 1980-1989” is on view from Jan. 13 through Feb. 17 at Magenta Plains, 94 Allen Street, New York City, magentaplains.com.

After being appointed the head designer of Tiffany & Co. in the 1970s, Elsa Peretti was celebrated for her bold, sculptural styles that elicited both glamour and power. Nearly 50 years later, her iconic pieces remain house favorites. Take the bone cuff — a broad, majestic band designed to conform to the contours of the wrist — a gold version of which is worn by Gal Gadot in Patty Jenkins’s “Wonder Woman 1984” (2020). Artful gold jewelry was also a notable trend on the spring 2021 runways: There were oversize button earrings at Balenciaga, twisted-metal chokers at Jil Sander and chunky chains worn as cuffs at Louis Vuitton. And many independent jewelry designers are following suit. Rosh Mahtani, the founder of the London-based Alighieri, considers her pieces to be wearable interpretations of Dante poems, while Anna Jewsbury, the founder of Completedworks, also in London, designed a pair of earrings inspired by intricate folds of drapery as captured in Renaissance paintings. Then there’s the New York-based designer Monica Rich Kosann, known for her modern take on the locket, who created a ring that resembles a fish and is meant to symbolize perseverance, a quality that all artists must possess, and one for the rest of us to aspire to as we start a new year. Plus, who doesn’t love a splash of gold?

A Charming Country Home Nestled in the Catskills