The Time-Warped Charm of Valerie June

A fire crackled in a cast-iron stove behind Valerie June. She had a bright carnation in her abundant dreadlocks, a mug of tea, a banjo by her side and an Etta James album propped against an amplifier as she chatted via video about her new album, “The Moon and Stars: Prescriptions for Dreamers.” She had all but finished the music last January, after two years of on-and-off recording, and was expecting at first to release it in 2020. But her label, Fantasy, convinced her that would be a “bad idea,” she said with a laugh.

Now, the 39-year-old musician was ensconced at an Airbnb rental house in upstate New York, where she could make music at any time without disturbing the neighbors at her Brooklyn apartment. She had set up instruments, microphones and lights for home recordings and for the livestreamed performances that she’s substituting, for now, for her years of perpetual touring.

“It feels so strange,” she said. “It just feels so different to not travel. I value just being alone, but this is way too much.”

Although “The Moon and Stars: Prescriptions for Dreamers,” due March 12, arrives in a different era than the one it was made in, it sounds unexpectedly timely. Even before the isolation of the past year, Valerie June’s artistic intuition had led her toward thoughts of stillness, meditation and inwardness. She also completed a book that is due in April under her full name, Valerie June Hockett: “Maps for the Modern World” (Andrews McMeel), a collection of poems, drawings and homilies about consciousness and mindfulness, like “Visualization”: “When you don’t see a path/Before you,/Maybe it’s time to fly.”

Valerie June has built a devoted following by ignoring expectations. She is simultaneously rural and cosmopolitan, historically minded and contemporary, idiosyncratic and fashionable, mystical and down-to-earth. She calls her style “organic moonshine roots music.” Her voice has a wayward twang and a sly finesse, while her music wanders amid soul, country, folk, jazz and blues — 3 along with nods, on the new album, to hip-hop and Fela Kuti’s Afrobeat.

“Not every song that I write fits a certain genre,” she said. “Songs are teachers — they’re like bosses, basically. They’re like, this is what we want. They have lives and feelings and potentials and desires and dreams. And I have to be the one who’s listening to them and telling whoever it is, what I hear that they want.”

She added, “A whole lot of magic has to happen to make music. A whole lot of minds have to see something invisible. The act of making music — that could be spiritual. You’re taking something that’s not physically seen and you’re bringing it from nowhere, pulling it from thin air, so people can experience it.”

Valerie June was born in Jackson, Tenn. and grew up in nearby Humboldt. She learned to sing from all the voices around her at church services — young, old, pure, cracked — while she was exposed to the secular music business through her father, a part-time concert promoter. She also dug into the musical history of Tennessee, the Appalachians and the Deep South, from early blues singers like Memphis Minnie to Dolly Parton to the Memphis rap group Three 6 Mafia. Valerie June moved to Memphis as a teenager and began singing with bands and then as a solo act. In 2010 she landed a spot on an online MTV series about Memphis musicians, “$5 Cover.” 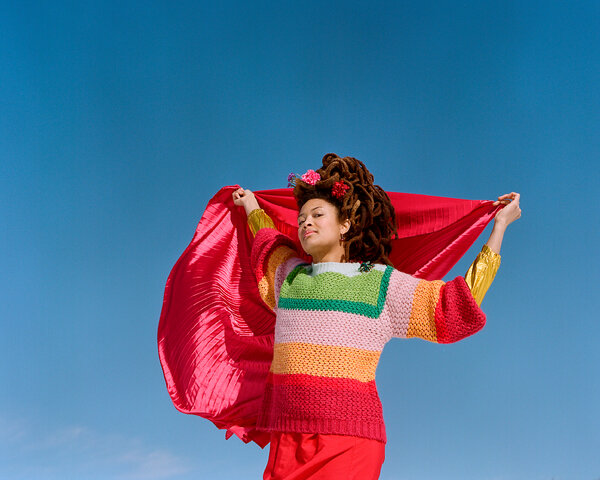 Her reputation spread fast among musicians. She sang featured backup vocals with the country singer Eric Church, the rapper John Forté and the songwriter Meshell Ndegeocello; she released her own recordings, including a bluegrassy EP, “Valerie June and the Tennessee Express,” co-produced by the fiddler Ketch Secor from Old Crow Medicine Show. Dan Auerbach of the Black Keys was a co-producer for her 2013 debut album with a label, “Pushin’ Against a Stone.”

By then, she had moved to Williamsburg in Brooklyn, though she rarely stayed in New York City for long. “For basically a decade,” she said, “what I was doing was flying to New York, washing my clothes and going back on the road.”

“Pushin’ Against a Stone” and “The Order of Time” from 2017, her first albums released nationally, had the naturalistic sound of musicians playing together in real time. They drew comparisons to expansive stylistic hybrids like Van Morrison’s “Astral Weeks.” But for “The Moon and Stars,” Valerie June decided to incorporate some studio time-warping. She wrote new material and dug into a backlog she estimates at 150 songs; one, the fragile “Fallin’,” dates back to the early 2000s. And with her co-producer Jack Splash — a Grammy-winning Los Angeles producer whose extensive credits include tracks with Kendrick Lamar, Alicia Keys, Jennifer Hudson and Anthony Hamilton — she layered live band recordings with low-fi demos and multitrack experiments.

“When I was working with Jack,” she said, “I told him certain words and feelings that I want the record to be able to have for people. Spirituality was one, iridescence was one, illuminance was one. Ethereal was one. And magical, fairylike, dreamy, colorful.”

From his studio in Los Angeles, Splash said, “Valerie writes like a poet writes. That’s something that very much gets overlooked in contemporary music in the constant quest for hits and success. It’s not often when I get a chance to work with an artist who actually cares enough about the world to want to write those types of things.”

They worked on the songs at home and saved up material until they were ready to gather musicians at professional studio sessions. Those tended to be scheduled on nights with a full moon, by “absolute cosmic coincidence,” said Splash. “It was very beautiful though. We felt like the sky was smiling down on us.”

Splash connected Valerie June to vintage Memphis soul by bringing in the string arranger Lester Snell, who was a mainstay of the Stax Records studio band and a frequent collaborator of Isaac Hayes in the 1970s; they recorded his ensembles at the renowned Sam Phillips Studio in Memphis. Valerie June also garnered a cameo appearance from the soul singer Carla Thomas, who had mid-1960s hits like “B-A-B-Y” and made duet albums with Otis Redding. On “The Moon and Stars,” Thomas recites an African proverb — “Only a fool tests the depth of the water with both feet” — and then sings along with Valerie June on “Call Me a Fool,” a Southern soul ballad testifying to impulsive love.

But the album also includes hypnotic songs like “Within You,” which stays on one chord throughout its five minutes as Valerie June sings thoughts like, “The only truth to know/Is in the letting go.” It’s a sonic assemblage built from a mantra-like acoustic guitar line, tendrils of electric-guitar improvisation, an off-kilter drum-machine loop, wisps of Valerie June’s voice and Snell’s hovering string-section chords.

The final track for “The Moon and Stars” was going to be “Home Inside,” a song about a search for peace, which reflects, “I know there is a home inside/Window to soul, where every dream abides.”

But during the first months of quarantine in 2020, Valerie June returned to her family home in Humboldt, where her mother still lives. “It was starting to be summer,” she recalled. “I was still out in the country, away from everybody in the world. And all I heard was bird song, day and night. I would wake up and just go out there and record bird song.”

Eventually, she decided to give the album a new ending. With her bird recordings, she and Splash layered on keyboards, flutes and the bell tones of a Tibetan singing bowl to make “Starlight Ethereal Silence,” the album’s postscript. “You go into this nature world,” she said, “And you can sit there and let them be the singers — because they’re the best singers — and just be immersed in all of what is around us all the time.”

Although the album was finished in 2020, the context of that turbulent year changed the way Valerie June saw her songs. “Smile,” a song that arrives midway through the album, is about a determination to make it through rough times. In 2020, she was listening to the track and watching Black Lives Matter protests and, with the death of the Georgia congressman and civil-rights activist John Lewis, footage from the marches and rallies of the 1960s.

“I saw everything that we’re fighting for now, with systemic racism and injustice,” she said. “And I saw this older Black woman sitting on the steps of, like, a sharecropping house or something. Maybe she had been a slave and maybe she had truly known the hard times. And she just started smiling. Because she had done everything. She had fought for freedom. She had tried, you know, and all she could do was smile. And in that smile, there was some joy and some happiness that just couldn’t be taken from her no matter what anyone ever did. And I was like, ‘Oh my God, is that what the song is connecting me to?’”

Above all, a willed and unblinking optimism courses through Valerie June’s songs. “One of my lessons for this life is, how can I keep my energy?” she said. “I know darkness. I know the blues. And so how can I use the blues as a fuel for what I wish to say? You know, the negativity is always going to be there. It’s just, how do you work with it? We all have these seeds of darkness within us and we all have these seeds of light. We get the choice.”