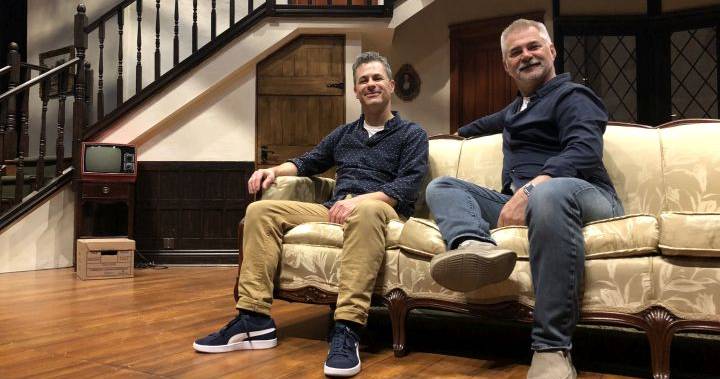 Theatre Calgary is opening its 2019-20 season with Noises Off, an established British comedy it is hoping will have theatregoers laughing from start to finish.

A play about a play, Noises Off takes the audience through three different stages of the fictional production of “Nothing On.”

“The first act is — you see the real set and you see [the actors] rehearsing,” said Christian Goutsis, who plays Dallas Lloyd, the director of “Nothing On.”

“It doesn’t start well and it just keeps getting worse and worse and worse, and things fall apart and madness and hilarity ensue,” added Noises Off director Mark Bellamy.

Listening to “Nothing On” fictional director Goutsis and real Noises Off director Bellamy banter back and forth about the production got a little confusing at times — even for the cast.

“Christian would stop the show and then I would stop Christian, so it was just like, ‘Who are we listening to?’” laughed Bellamy at the confusion of calling scenes during the first few rehearsals.

“It became sort of like Inception. There were so many layers upon layers of this crazy world when you’re rehearsing a play that’s about rehearsing a play,” said Bellamy, comparing rehearsals to the 2010 science fiction feature film.

“It ends up looking seamless and looking like a lot of fun but in the rehearsal process and sort of getting the timing of everything, as Mark said, all the doors and the physical comedy that needs to happen takes a tremendous amount of detailed rehearsal and repetition,” Goutsis said.

END_OF_DOCUMENT_TOKEN_TO_BE_REPLACED

BIRDS Eye has brought back its beef and onion Findus-style pancakes just in time for Shrove Tuesday after fans were outraged when they were axed. Shoppers can ramp up the nostalgia for Pancake Day tomorrow (February 25) with the old school classic, which features the distinctive golden crispy breadcrumb crust filled with tasty mince. Findus Cripsy Pancakes were particularly popular […]

END_OF_DOCUMENT_TOKEN_TO_BE_REPLACED
We and our partners use cookies on this site to improve our service, perform analytics, personalize advertising, measure advertising performance, and remember website preferences.Ok