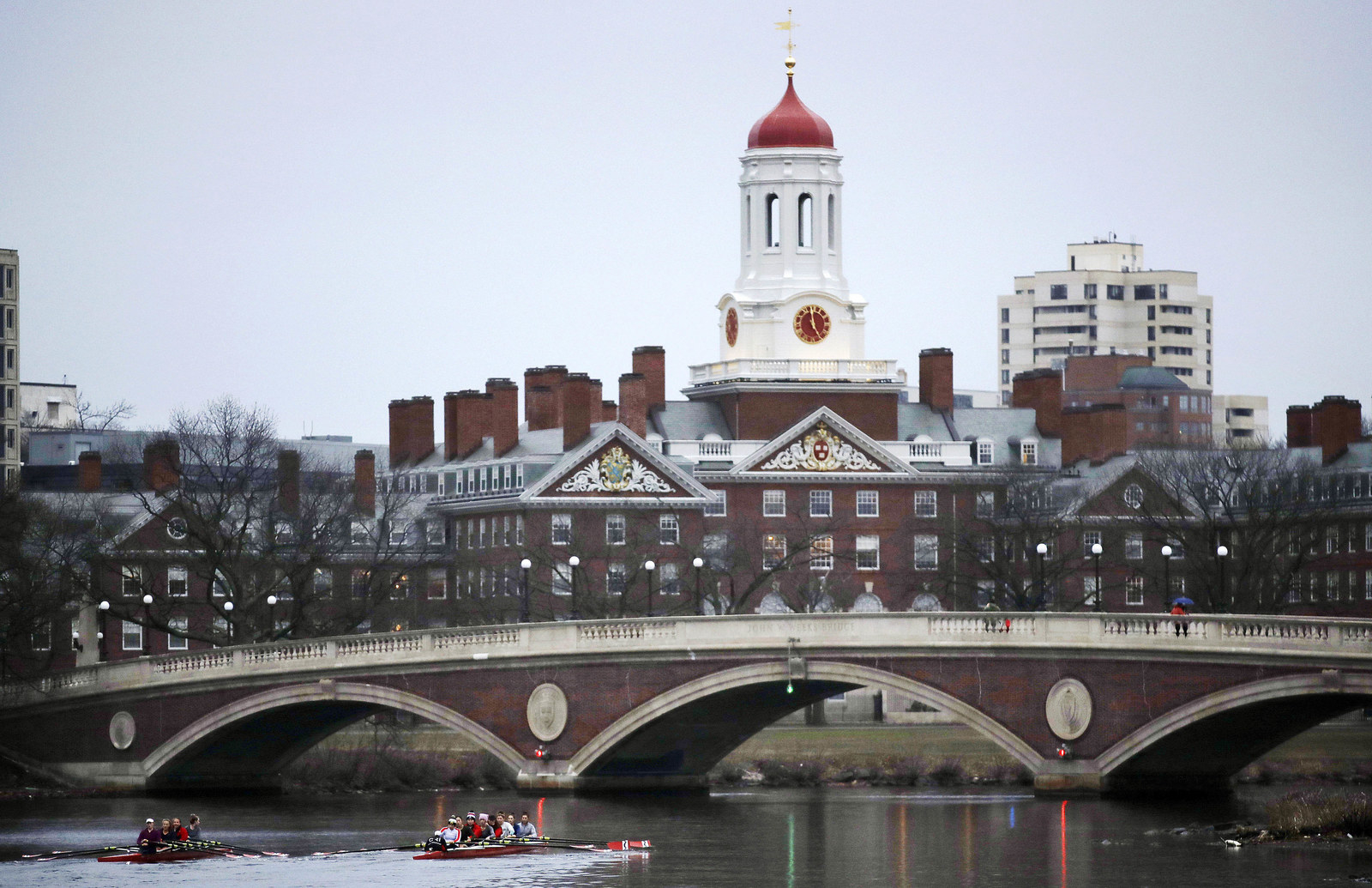 Four first-year Harvard Law School students said they have been targeted by racist and sexist emails and text messages from a fellow student and are accusing the school of not doing enough to deal with the threats.

In an email to the dean of the law school, the students described the messages as containing “racist taunts about affirmative action and intelligence” and “body-shaming” language, along with “other personal insults.”

The messages were sent from an anonymous person to black and women students in a section of their first-year class between December 2018 and March 2019.

Chris Volcy, one of the students who was targeted, said the messages made her feel “unsafe [and] uncomfortable going to class.” 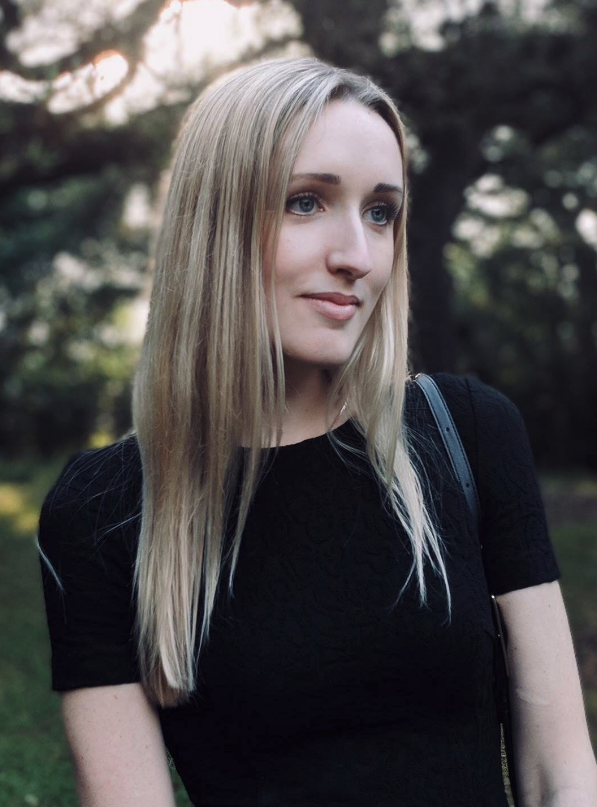 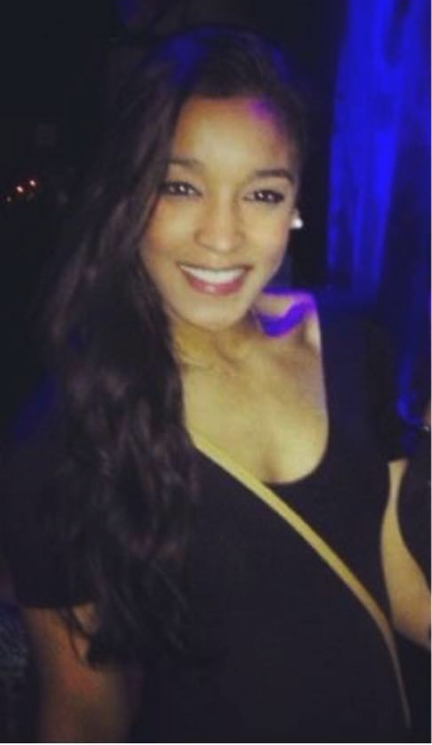 The students told BuzzFeed News that they have an idea of who the suspect is. Two of the black students said they feel the attacks were racially motivated, while two other women students believe they were targeted because of personal issues with the suspected sender.

“In the era of school shootings, in this era of white supremacy, really, and the violence and anger that goes along with that, I think it was our duty as students to bring this forward,” said Rooney. “It would have been really irresponsible for us to receive these messages, know that someone is exhibiting really bizarre behavior, and not say anything.”

However, Rooney and the others claim their reports fell on deaf ears, and they are accusing Harvard Law of ignoring their concerns.

A spokesperson for Harvard Law School told BuzzFeed News that none of the messages that the students received “threaten[ed] any type of violence.”

The spokesperson said the school could not “publicly disclose” the details of the investigation, saying it needed to “protect the respective rights of all parties.”

In a separate email to the students, Dean of Students Marcia Lynn Sells said the school couldn’t disclose the details of the investigation because of the Family Educational Rights and Privacy Act or FERPA, a federal law that governs the privacy of student educational records. According to Sells, FERPA would “not allow HLS to share the report” of the investigation into the incidents.

The students began getting the messages last December. Of the 80 students in the section, nine are black and 21 are other minorities. The first student to receive a threatening text message was one of the black students, Mo Light. 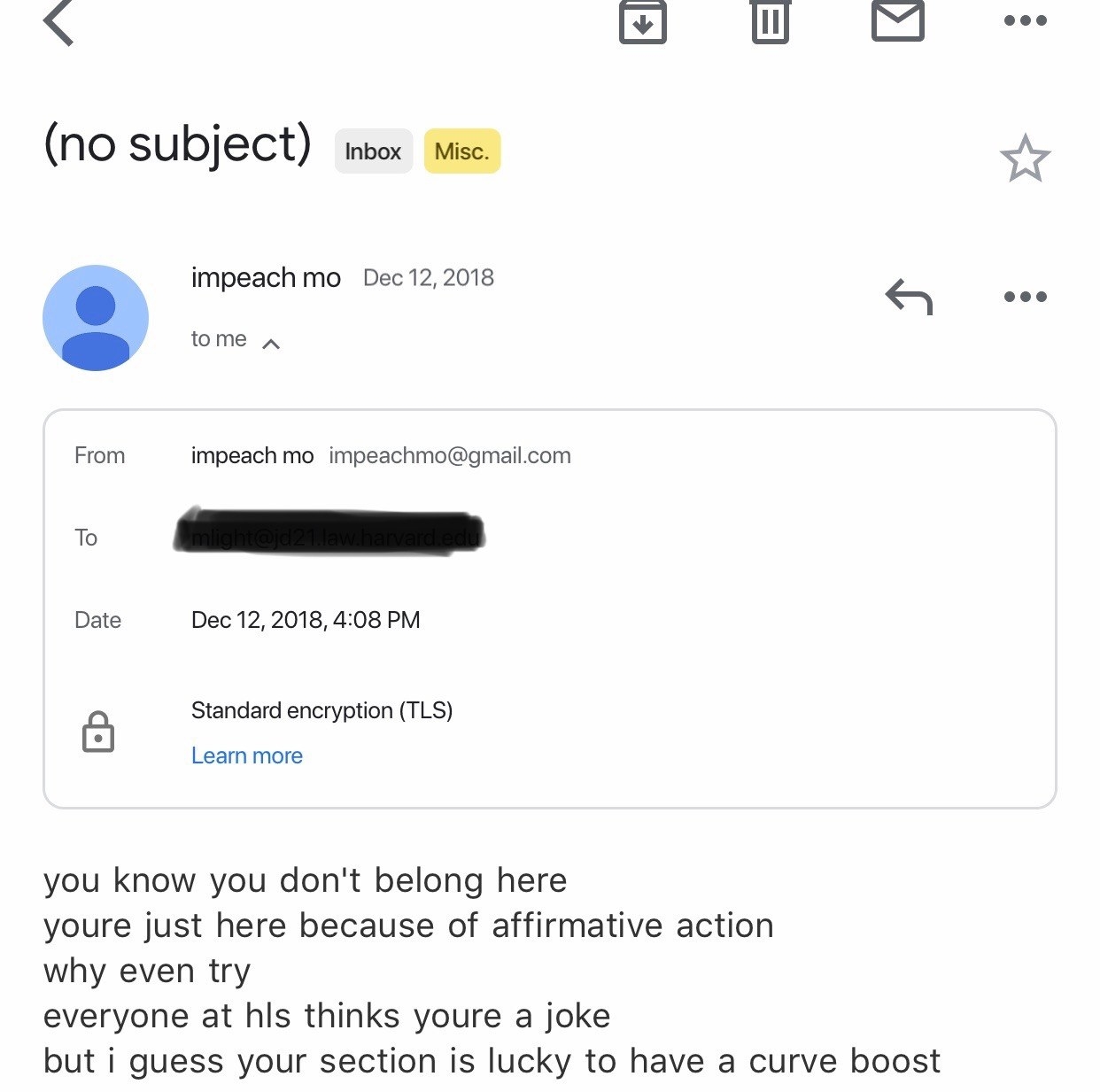 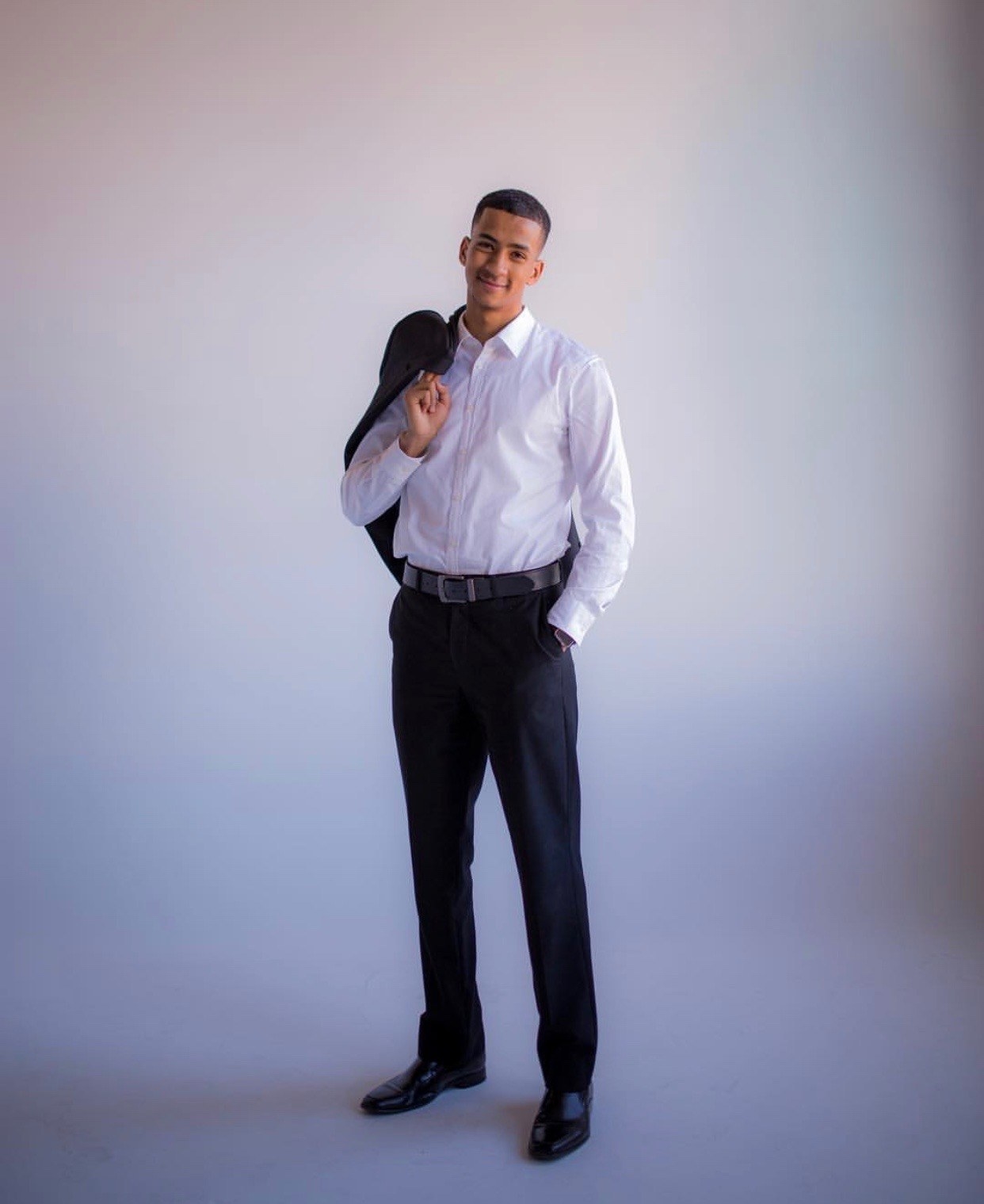 “You’re just here because of affirmative action,” the sender wrote, “but i guess your section is lucky to have a curve boost.”

“My initial reaction was, ‘Wow, this is upsetting,’ but it’s not surprising, given that this is just living while black,’” Light told BuzzFeed News.

He immediately took action. Light said he told a faculty member about the messages, and he said they forwarded his complaint to Sells. Light also said he filed a police report with the Harvard University Police Department.

That wouldn’t be the last text message. A few months later, Volcy was studying in the university’s law library when she received an anonymous email with a similar message.

The email was also from an unknown email address, and contained a derogatory message written in all lowercase letters. 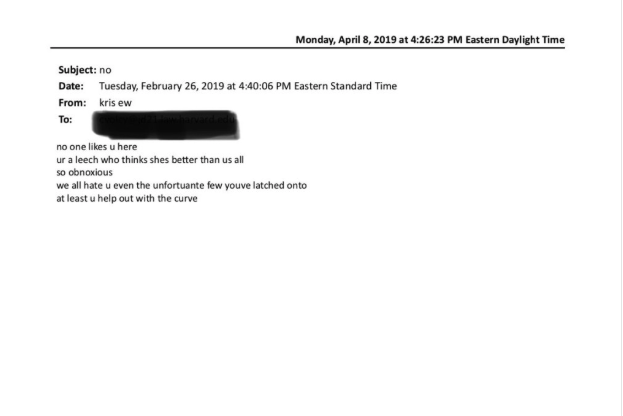 It read: “we all hate u even the unfortunate few youve latched onto, at least u help out with the curve.”

Like Light, Volcy said she reported the incident shortly after it took place. However, HUPD didn’t connect the two incidents, according to Volcy, even though both students were in the same section of the class and both are black.

“They made it seem like an isolated event,” said Volcy. HUPD declined to comment about the incidents to BuzzFeed News, and said they could not provide the students’ police reports, due to the documents belonging to the school’s private police agency.

A few days later, Rooney, who is white, also received a text message from an unknown number. The sender called her a “horseface from Texas” and told her to “gtfo.” 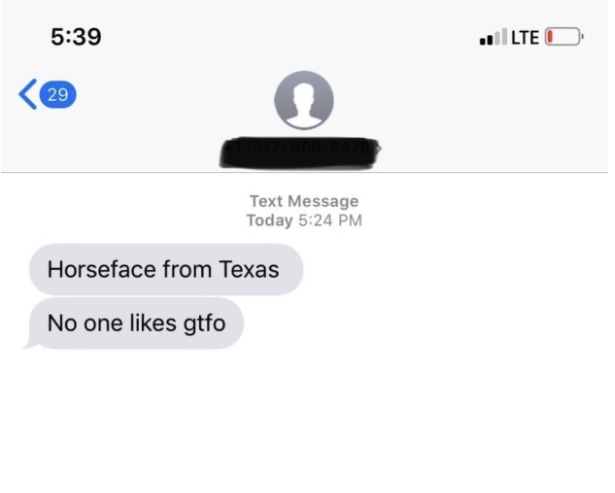 That same day, another woman minority student, who has asked to remain anonymous, received a text message from a different unknown number. 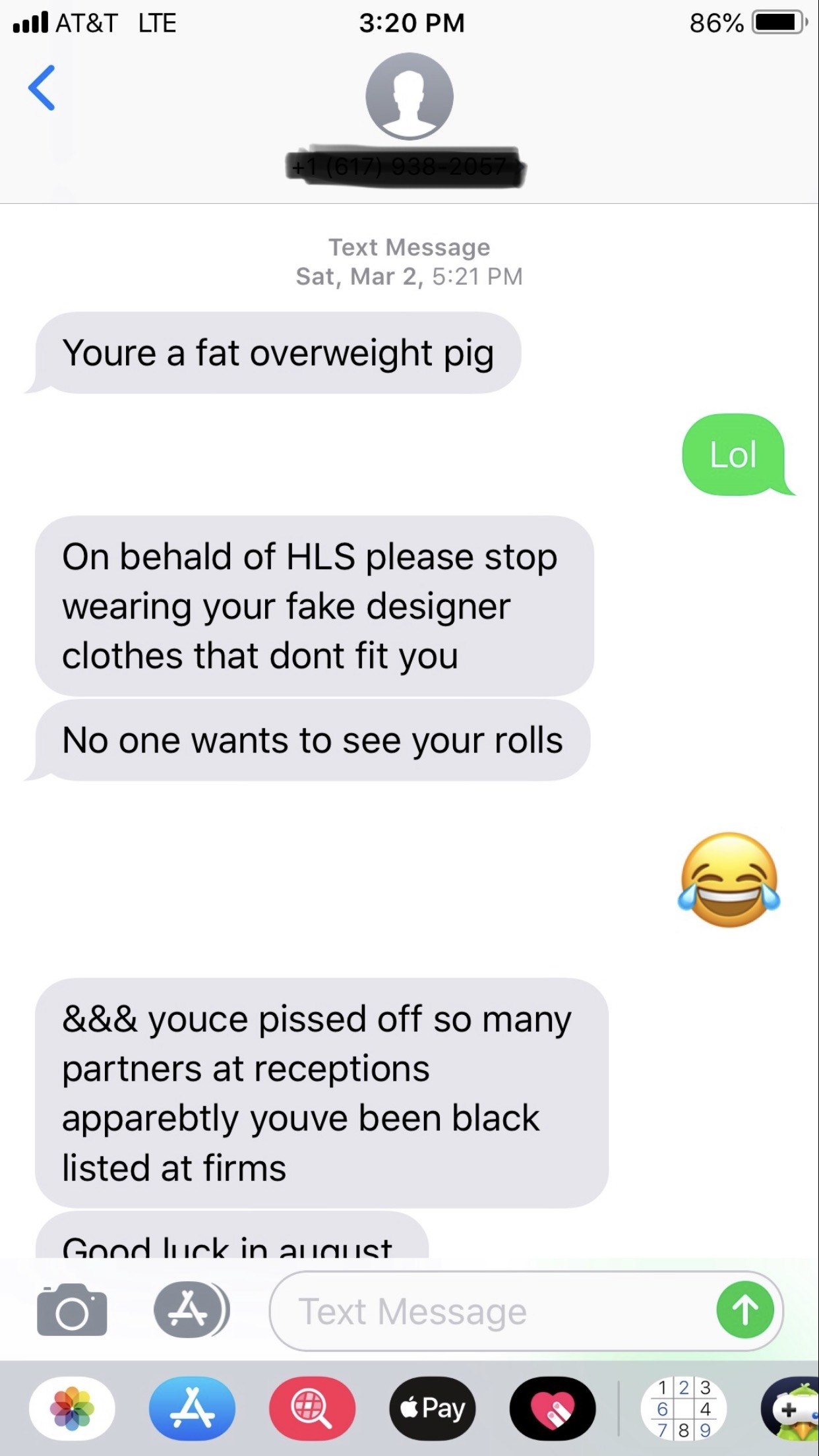 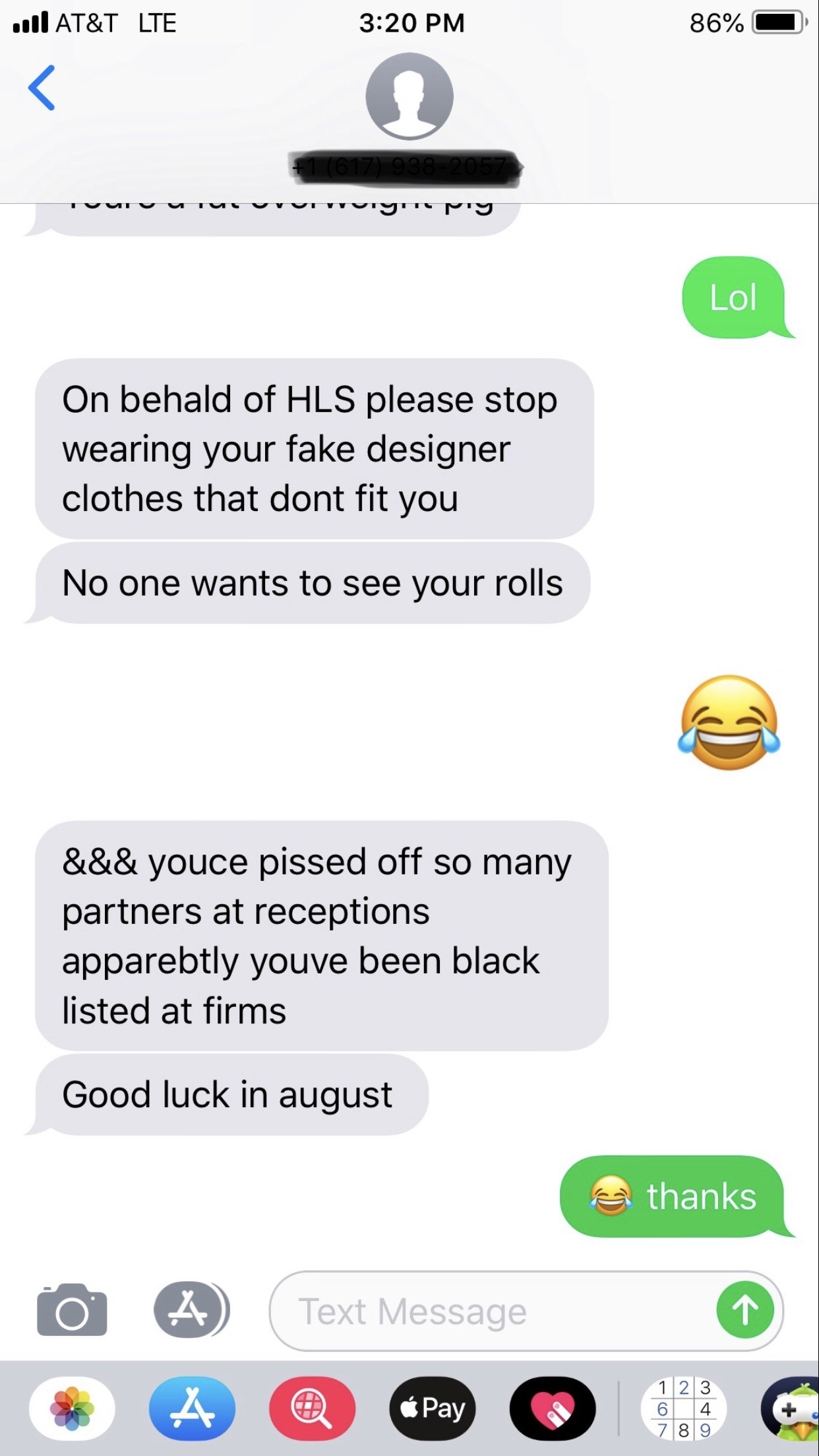 The sender called the student a “fat overweight pig,” saying she “pissed off so many partners at receptions [apparently] youve been black listed at firms.”

“We wear our blackness on our sleeves, and you know where we stand on controversial issues all the time because we’re not ones to mince our words,” said Light.

After Rooney reported the messages, she said she found out through a professor and other students that Light and the fourth student were also receiving derogatory messages. They tried to work together to push the administration to do something.

“Throughout March, we emailed the dean’s office multiple times, tried to set up meetings, and it was just very bizarre,” said Rooney. “The response was just like, ‘We can’t do anything, sorry that happened… I cannot believe that an institution would not take action.”

The fourth student agreed it was a “struggle to work” with administrators.

“All we want is for them to help us, to make sure that we feel as though the school is actually doing something in our interest,” said the fourth student. “And yet it’s really difficult to believe that … when they won’t even address our questions head on.”

Four months after the initial message was received, Sells’ office opened an investigation into the incidents, hiring outside firm Hogan Lovells. The students received a response two months later — but not a response they were hoping for.

In an email to all of the students of the section, the investigative team hired by the dean’s office announced that it had been “unable to establish the sender(s) of the threatening messages.”

“We condemn in the strongest terms these messages and all communications that are intended to demean people,” the statement read. “Such messages transgress our Community Principles, which commit every student, faculty and staff member to, among other things, mutual respect.”

In a separate statement sent to the four students, Sells said that school policy states a formal disciplinary proceeding can only start if a suspect can be identified “by clear and convincing evidence.” She added that the school would need to involve third parties, like cellphone providers, to investigate further, which it doesn’t have the authority to do.

Sells wrote that, because the investigators were unable to determine who sent the messages, the school’s hands were tied.

The investigator from Hogan Lovells didn’t immediately reply to an inquiry from BuzzFeed News regarding the details of the investigation. 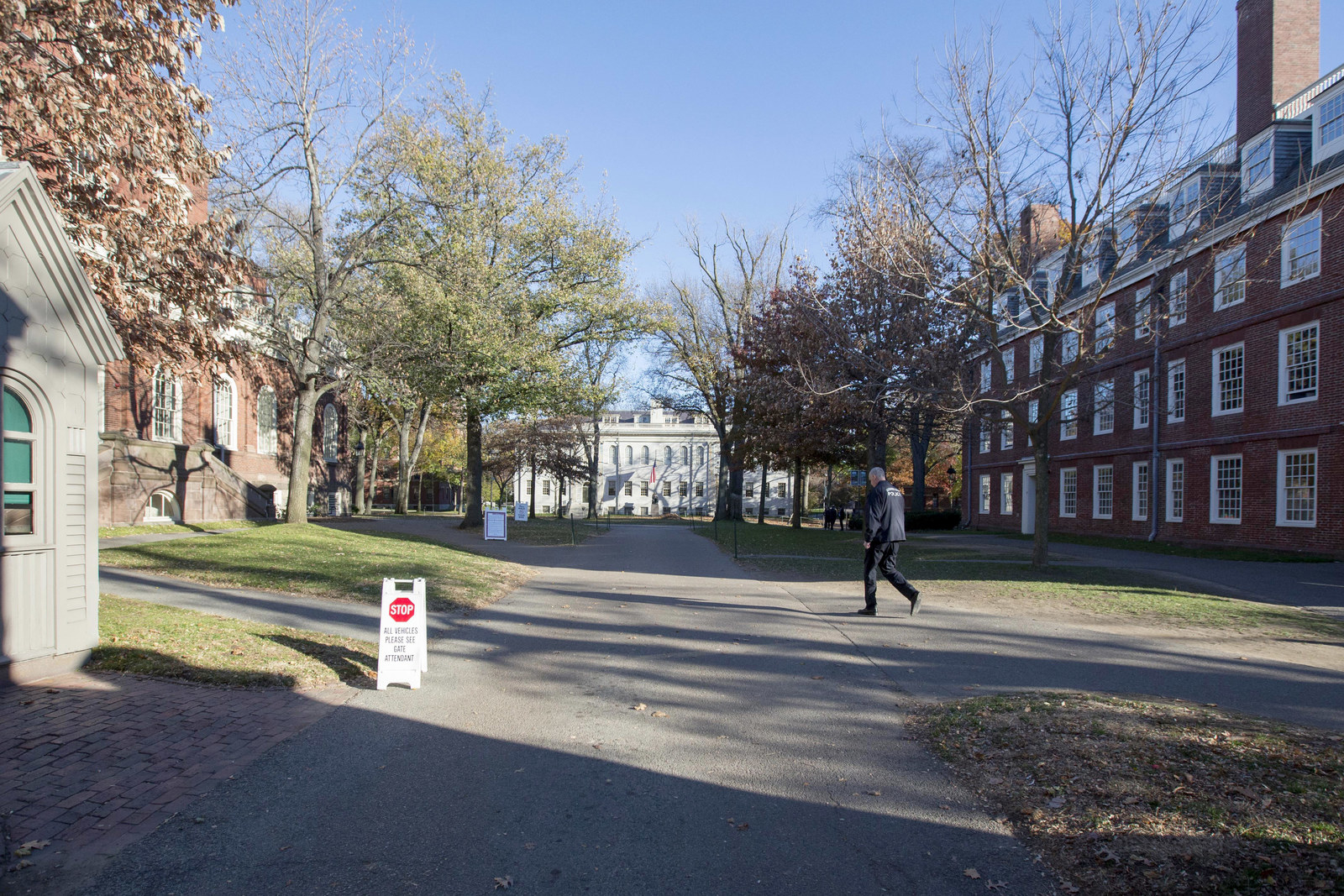 Volcy said the decision was “hard for us to accept.”

“The fact that they made this determination without allowing us to kind of look at the evidence and kind of actually scrutinize who they interviewed and what questions they asked, it’s kind of hard for us to accept that finding,” she said.

The students are demanding to see the full investigative report into the incidents “to see why the school decided to let us attend classes” with their alleged harasser, according to a petition they addressed to the school’s administration.

Volcy said she felt the situation has caused them to “not have equal access to education.”

“We spent so much time investigating, like kind of tussling with the school, and that was all time that we should’ve spent studying,” she said.

She feels the school did not do enough to investigate.

“We’re angry that we spent all of last semester digging ourselves further into debt, and just, like, not having been able to be full students,” Volcy said.

Rooney said that she wants the suspect to be identified in order to have “closure and peace of mind.”

“I definitely would want the student to be suspended and get help,” she added.

Light believes the situation speaks volumes about the social climate of the university. He described it as a “forever-existing hatred of people of color in these high-powered spaces.”

“For many people of color, you come to Harvard running a race with weights tied to your ankles,” said Light.