On July 29, 1981, the biggest royal wedding of the century was unfolding at St. Paul’s Cathedral in London: future king Prince Charles was preparing to marry then-Diana Spencer and make her the Princess of Wales, finally settling down with a wife after much urging from the royal family. We now know from Princess Diana’s later recollections that her wedding day was filled with doubts and fears, as she’d already come to suspect her soon-to-be husband was involved with Camilla Parker Bowles (now Duchess Camilla). Diana’s wedding photographer Kent Gavin, featured on Britbox’s The Wedding of the Century, confirmed exclusively to SheKnows that he saw “sadness” in Diana’s eyes on her wedding day — the day when it all began, and yet was already starting to come undone. 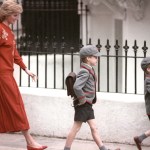 “I was only looking up trying to look at those beautiful eyes of hers underneath the veil. I sensed sadness there,” Gavin says of that enormous gathering (3,500 guests!), where he enjoyed a front-row seat to capture every moment. “What we now know she was experiencing…to go through all of what she did, I mean, it was a hell of a lot to take.”

Gavin notes that Charles’ exes, including Camilla, were all seated at the wedding and visible to Diana as she went past: “I wish I’d have known that then, because the position I had, I was looking at all of them,” he recalled to SheKnows. “We only know now what Diana was suffering because of Camilla.”

Diana and Charles would remain married for a total of 15 years, finalizing their divorce in 1996 though they would first separate in 1992. During that time, they welcomed their sons Prince William and Prince Harry and carried out their royal duties in the public eye, all the while fighting to preserve a marriage that seems, from today’s accounts, doomed from the start.

Diana’s marriage to Charles may not have been successful, but her effect on the royal family during her years by his side was indelible. Here are our favorite photos from The Prince and Princess of Wales’ time together.