They Died in the French and Indian War. Their Remains Await Reburial.

At points over the past decade, disinterred human remains — the full skeletons and fragmentary bones of British soldiers and colonial militia who died during the French and Indian War — have been a cause of some concern in the environs of Lake George, N.Y.

They were unearthed on the shores of the lake, most of them nearly 70 years ago during the reconstruction of Fort William Henry, whose fiery demise in 1757 became the backdrop for James Fenimore Cooper’s “The Last of the Mohicans.”

Under siege by forces led by General Louis-Joseph de Montcalm, the British surrendered to the French only to be set upon and, in many cases, killed by France’s Native American allies.

But some of the remains have never been reburied. Displayed for decades as part of the fort’s appeal to history — and tourism — most of the bones were later taken for study by anthropologists hoping to better understand colonial life, and death.

Now, more than 260 years after the soldiers died, some of the bones are still at an Arizona university. Others are sitting in a room at the fort in a Staples box, labeled “remains.”

The question of what to do with the bones — allow continued study or properly rebury them — has trailed the owners of the fort, a private company that operates an adjacent resort, since at least 2012. In February of that year, The Associated Press reported that, only three of the 15 skeletons found during the reconstruction had actually been reinterred during a well-publicized 1993 reburial ceremony at the fort.

The remaining 12 had been given over in the 1990s for study at Arizona State University, where they remain. Other bone fragments, unearthed by anthropologists in the 1990s and sent for study at the University of Waterloo in Canada, were returned eight years ago but still sit in the Staples box in a storage area. 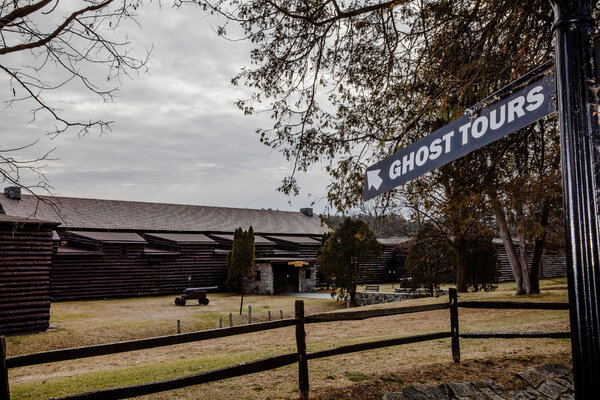 In recent months, the debate rekindled when a worker hired to lead popular ghost tours at the fort came upon the box with the remains, protected in Bubble Wrap, and raised concerns to her employer, the Fort William Henry Hotel and Conference Center, and to several state and federal agencies.

The nighttime tours, which include a visit to a crypt where some of the remains were found, capitalize on the fort’s history as a killing ground. Several tour guides said they were concerned that information they were given to present to visitors suggested that all the skeletons — not just three — were reburied with military honors in 1993. The museum denied this was the case.

Earlier this year on the Travel Channel, Jack Osbourne hosted an episode of “Portals to Hell” from the fort, depicting it as the site of “one of the bloodiest massacres in Colonial America,” and calling it a “negative, evil, and borderline demonic” space.

The company that owns the resort and the fort, which is known as the Fort William Henry Museum, said the bone fragments in the box were being properly cared for. “We have investigated and all remains are professionally and properly stored for preservation and future study or burial,” said Kathryn Muncil, chief executive of the Fort William Henry Corporation.

The company said it is doing its best to enable scientific research into the remains as well as to abide by traditional practices in the handling of the dead. “There’s lots of red tape and opinions,” said Melodie Viele, the director of the museum. “Ideally we should find a way to protect them permanently.”

But there are others who say there is a time limit to how long historic remains should be disinterred, no matter their value as windows into the past.

“How much information you gain should not outweigh the wishes of people asking to bury the remains,” said Sharon DeWitte, a member of the American Association of Physical Anthropologists. “We should be treating these bodies with respect.”

Anthropological research at the fort is credited with expanding the understanding of colonial illnesses, and clarifying with forensic precision the facts surrounding one of the central confrontations in what the English call the Seven Years’ War.

Maria Liston, an anthropologist at the University of Waterloo who has studied the bone fragments, said the remains were always treated with great respect while in her custody. She said she returned them in 2012, possibly in a Staples box, but thought they would only be in storage a short time, not years.

“I was told that the skeletal remains I returned were being reburied in the spring after I returned them,” she said.

Nonetheless, she said, given their value to science, some remains should not necessarily be reburied.

“Most researchers would prefer, if ours were the only opinions that mattered, that the skeletons never be reburied,” Dr. Liston said. “The reason that we would prefer the remains not be reburied is not to accumulate them, but because science does not stop progressing despite the best efforts of some politicians.”

A representative of the New York State Association of Cemeteries, a nonprofit trade organization, said the situation at Fort William Henry was unusual.

“Traditionally what would happen is an archaeologist working with the state or a museum would eventually schedule the remains for interment,” said David Fleming, director of government affairs for the association. “I have never heard of a nongovernmental organization holding onto human remains for this long. That’s problematic, and they should bury the soldiers.”

In 2014, fort officials had said that Brenda Baker, the Arizona State University anthropologist who has been studying the remains, had completed her work and would soon be returning the skeletons for reburial. But on Wednesday, Ms. Muncil said that, actually, Dr. Baker is still studying the remains and would return them when her research is complete.

Dr. Baker and the university declined to comment and referred questions to the museum.

Ms. Viele, the museum director, said one reason for the delay in reclaiming the skeletons is that the fort does not have a climate-controlled storage facility like that at Arizona State. She said the other alternative, reburial, was not as straightforward as it would appear.

“The difficulty is that New York does not have clear rules,” said Ms. Viele.

Though New York does not set specific conditions for the reburial of historic remains, most cultural institutions and universities have reinterred remains as soon as their research is completed, said Mr. Fleming of the cemetery association.

A spokesman for the New York State Office of Parks, Recreation and Historical Preservation said his office would coordinate with the museum and other federal and state agencies to pursue a plan to rebury the bones. “While New York is not the owner of these remains nor has any direct control over their disposition,” the spokesman, Dan Keefe, said in a statement, “it is important that care be taken to appropriately inter these remains, with any military designations and honors that may be owed.”

The reburial of Native American remains held in museums and other repositories accelerated after 1990, when Congress passed the Native American Graves Protection and Repatriation Act, known as NAGPRA. The law established criteria under which federally recognized tribes could reclaim human remains and objects deemed to have special sacred or cultural value. Museums and universities that received federal funding were required to inventory their possessions, notifying and transferring claimed human remains and items to lineal descendants or Indigenous groups. Many organizations that failed to comply with the law have faced fines.

Reburials of historic remains are taking place elsewhere in Lake George, a town with a rich colonial-era history. Last winter, the construction of a three-family home unearthed 18 skeletons and three coat buttons that anthropologists dated back to the Revolutionary War. Research suggested that the deceased may have been American soldiers formerly housed in a crude smallpox hospital nearby.

Excavators dug through a snowstorm to retrieve the remains; the town worked quickly to find a method of preserving the Cortland Street site and to search for a final resting place for the dead. A year later, public officials have developed a plan to reinter those skeletons at the Lake George Battlefield Park. Scheduled for completion in the next few years, the site would include extra crypts for other remains found in the area.

Dr. DeWitte, a biological anthropologist at the University of South Carolina who has taken a special interest in the ethics of her field, said she thought it would be possible to make progress at the fort as well.

“With this number of small remains, there has to be strong justification for holding onto them,” she said. “Just because there aren’t regulations on the books for burying historical remains doesn’t mean something can’t be figured out.”