‘This American Wife’ Review: Wives Out, Knives Out

I hate reality TV. It’s not the annoying personalities or the absurd playground-style fights or the drama that belies a fundamental lack of substance. Nope, it’s the assertion that it isn’t another fabricated product but action that’s “real.” It’s even in the name: “The Real World” or “The Real Housewives” — with the implicit assumption that life can be as curated as, say, a filmed brunch gathering of pampered celebrity wives.

But maybe I’m being too hard on these women, who exist in something between an anthropological experiment and the theater. Yes, theater, the realm where we find ourselves in “This American Wife,” by FourthWall Theatrical. It’s a wild parody of, and homage to, “The Real Housewives” franchise.

If you saw Michael Breslin and Patrick Foley’s “Circle Jerk,” a bonkers queer fable on privilege and cancel culture for the internet age, you already have a sense of the kind of satirical comedy and ambition that defines “This American Wife.” Jeremy O. Harris, of “Slave Play,” is also a producer.

In the 90-minute production, Breslin, Foley and Jakeem Dante Powell, who are real-life “Housewives” superfans, appear as fictionalized versions of themselves. They each end up in a Long Island mansion while recounting their love for the franchise.

Once there, the actors suddenly dip into the personas of the housewives as easily as one would slip into a royal blue satin dress with fringed sleeves — or, you know, whatever you have lying around.

The production, conceived and written by Breslin and Foley, eventually spins out into a playful music video and then an improvised reunion-style segment where the actors argue and respond, as “Housewives”-esque caricatures of themselves, to questions from fans on Twitter. Throughout, an anonymous woman with a claw-like manicure and long wavy bottle-blonde hair appears in white chunky heels through the mansion — she’s like an apparition summoned from the inherited wealth of Beverly Hills, the splashy opulence of runway fashion and Bravo TV’s bulging wallet. 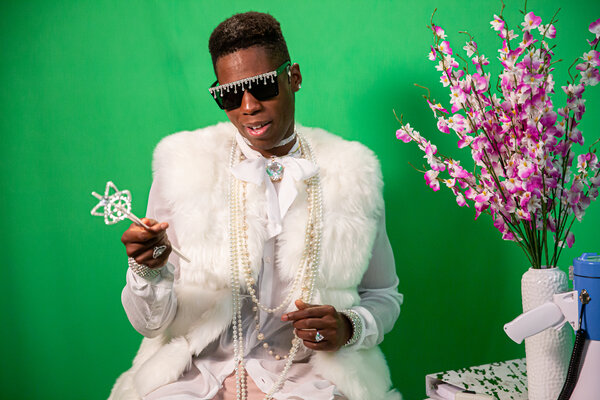 Like Cohen, who interrupts the upscale creams and off-whites of the décor with eruptions of colors, the costume designer, Cole McCarty, also walks the fine line between subtle and bold hues. He clothes the actors in sheer blouses and textured blazers before pulling out the extravagant party gowns and statement hats. Tommy Kurzman, the hair, wig and makeup designer, has the performers’ eyelashes ecstatically curled and lips thoroughly glossed for their close-ups.

The superficial glamour of “This American Wife” is alluring, the kind of eye candy a superfan might enjoy on the show. Above all that’s Breslin, Foley and Powell embodying — with an uncanny level of precision — the various housewives. The gestures and affectations aren’t just acts of glorified mimicry, however; they are a statement on the Venn diagram of gay male tropes and a particular brand of performance by women. And so there are snapped heads and sashays and the glorious theatrics of Powell as Kenya Moore (“The Real Housewives of Atlanta”), saucily declaring himself “‘Gone With the Wind’ fabulous.” (Powell, as a Black man, also brings attention to the racial element of the franchise, which features mostly white women, but the script doesn’t offer a deeper analysis.)

That would have already been a comedic feat for the three, but much of the production is also improvised — and so well that it’s hard to differentiate. The last scene, a feisty interview segment, contains such a juicy rapid-fire argument between Foley’s character and Powell’s that it might have been an actual scrap between two catty acquaintances. (Shout out to Powell’s “I could make avocado toast out of you,” the Louis Vuitton of retorts.)

Though I probably risk snappy retribution here, seeing how thoroughly Foley, brandishing my colleague Jesse Green’s book “The Velveteen Father,” roasted him (bitingly and perhaps cruelly), I, like Vicki, Brandi, Danielle, Tamra and Porsha, must not back down.

Because despite its vicious charms, “This American Wife” quickly becomes exhausting. Since the production is split into separate movements, the two longest of which are primarily Breslin, Foley and Powell recreating scenes from the franchise, the novelty soon wears off. And though the production is so consciously playing with the artifice of the form, each performer has a moment of vulnerability when he — or at least his autofictional persona — reveals a tragic fact or experience. But when Breslin and Foley separately share the same tragic assault story — experienced by one and appropriated by the other — the gross fabrication casts a shadow of doubt over everything.

In one scene, Powell asks Breslin (who can shed white woman tears at the blink of an eye), “What’s your reality?” I had a similar question.

For most of “This American Wife” I was onboard but occasionally felt left out of the joke, especially in the improvised parts that could feasibly be sincere. The same is true of the music video segment: The show often feels so seduced by its own eccentric performances that it loses track of its point.

What is missing here, which was well-established in “Circle Jerk,” is a more coherent commentary on queerness and reality show divas.

Conceptually and technically, “This American Wife” has much to offer, especially in the way it uses humor to seriously consider lowbrow reality TV as an art form that could be on the same level as the highbrow artifice of theater. And for “Housewives” apologists, it’s definitely a must-see.

For viewers like me, who prefer their fiction with less spray tans and Prada, these housewives can offer some laughs, but not enough. If I have to watch reality TV, I’d rather look elsewhere — anyone know if “Chopped” is on tonight?

This American Wife
Through June 6; thisamericanwife.live.